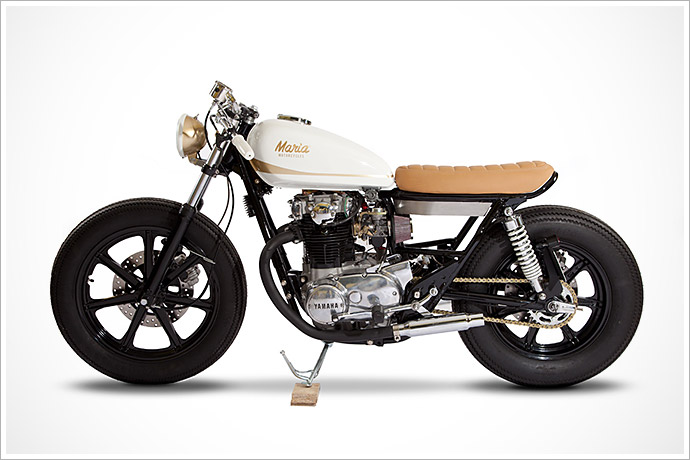 Anyone who’s ever attempted a custom bike build will know just how much work a seemingly simple little “tidy-up” can amount to. Something that looks like it’ll take two weeks tops ends up being an 18 month project with more dead ends, u-turns, and detours than a Sunday drive with Stevie Wonder. So imagine the work involved in starting a bike shop “a few months ago” and then going public with not one, not two, but three killer bikes. At very best that’s a bike every three weeks. Now I can’t speak for you guys, but if I had three weeks to build a bike the results would be humble at best. A few rattle cans, and angle grinder – hell, even a custom seat would take that long to throw together. But it seems as if the guys at Maria Motorcycles in Lisbon, Portugal have either worked their asses off these last few months or they’ve invented time travel and brought these bike back from the future. And the real icing on the cake? Both EXIF and little ol’ us are doing features in the same week on their stuff. Take your stinky hats off and give a little nod to Luis Correis and his latest bending of space and time, the beautiful “Eva.” “The Bike´s name is EVA. It started when one of the guys found an old and very used Yamaha XS650. In Portugal these old models are very rare, so it was a challenge that begun as a personal project. During the process of restoration and re-styling, ideas come together to create a single and unique motorcycle.” “The first part of the build was easy, removing all the dirty and rusty parts. During this process, we took care of all the damage parts, and got new ones. We created several unique parts as well, like the battery box, the headlight and backlight supports and a few other things. We changed the back of the frame to give a more radical look. The Firestone Deluxe tyres gave a good aggressiveness to the wheels.

With the help of some friends that work in this area, the engine was rebuilt from scratch. Managing this was a big motivation boost which let us believe that all the rest was going to be possible. It seems like a new one now! The condition of the motorcycle was very poor and all this took a long time and effort. One of the good part was nowadays you can find all kind of new parts for a XS650.” “The design and the graphics just came out to be a very natural thing, since that’s our professional skills area. Getting the engine started was something tricky do solve. Hours and hours checking all details from the new electrical system. All wires were simplified. With the gel battery behind the seat and all wires and condensers hidden we got a very simple and clean look to the XS.” “The seat was another challenge. It was the best of 4 prototypes. We really knew what we wanted, but it was not simple to get there…!” “The result is what you see here. We are very pleased with it! Riding it is even better! The sound and the feel is amazing. We have not so much comfort, but the fun is outstanding! During all this learning process we started more 5 motorcycles under the name Maria. Soon you will hear more news about us.” Those liking what they see here should click on over to Maria’s website here. And fear not, for should anything even remotelt cool roll out of those Lisbon doors of theirs, you’ll see it right here. Promessa.