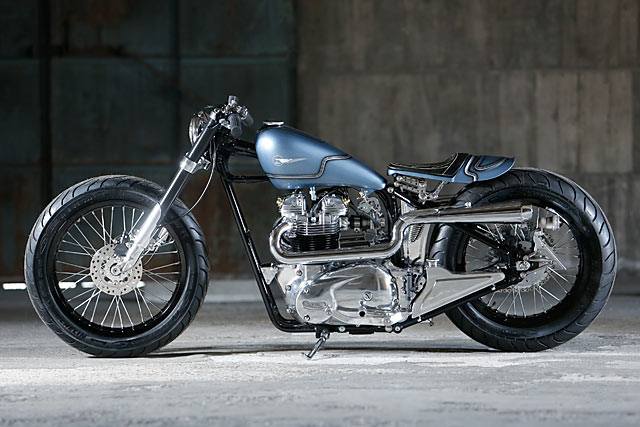 Kengo Kimura fronts up Heiwa Motorcycles, a workshop established in Hiroshima in 2005. They specialise in some of the most beautiful chopped, bobbed and slammed customs found anywhere in the world. This time around they’ve turned out this stunning TR6 Trophy dubbed ‘MasterPeace’. Dear readers, I think we have a late contender for bike of the year.

Now I said it was a Triumph TR6 Trophy but virtually the only thing about the bike that remains standard is the engine itself. And even that isn’t completely stock. It’s taken to 750cc from it’s standard 650cc capacity and inhales through a Keihin carburetor. But things get a little more complicated due to the way the bike was designed, using Kengo’s fragmented manner of bike building. ‘When I’m building a motorcycle I don’t have the whole picture of the bike in mind. I design parts,’ Kengo says. ‘I start with the engine and ideas for individual components and bring them all together’. That tail light he manufactures and sells in-house and the speedo is an aftermarket unit, but don’t go looking for any other components in an online store. But of all the hard work that has gone into every part of the build Kengo is proudest of the exhausts. The bend is perfect and the fit and proportions of the megaphones absolutely spot on. Check out the heat shields on top. Now go and look up the dictionary definition of craftsmanship. It should have a photo of these exhausts in there.

Thankfully for the grizzled anti-Firestone crowd Heiwa Motorcycles’s latest creation runs Michelin Commander II tyres brought to a halt by a Brembo single pot calliper at the front and a Grimeca unit at the chunky rear tyre. And that fat backside is the reason why the bike now runs a right hand side chain – Kengo couldn’t get the standard left hand side drive to work with the new wider tyre width. But that wasn’t the trickiest thing for the team at Heiwa Motorcycles to fabricate up – that was the seat. Getting that series of linkages and springs to work neatly and sit so tightly against the frame was no easy task.

But it was worth it. Because what you see here is one of the prettiest damn bikes you’re going to find all year. It’s truly one-of-a-kind, perfectly proportioned, and littered with incredibly tidy details. It’s all topped off with a paint job applied by Six Shooter that is just the right level of subdued. It’s gorgeous. We’re not the only people to think so. The MasterPeace took out the ‘Best in Show’ award at the prestigious Yokohama MoonEyes Hot Rod & Custom show just last week. It was the first time that Heiwa Motorcycles has won the award and first time ever that a European motorcycle has taken the crown from an American or Japanese branded build.

Bike of the year, anyone?