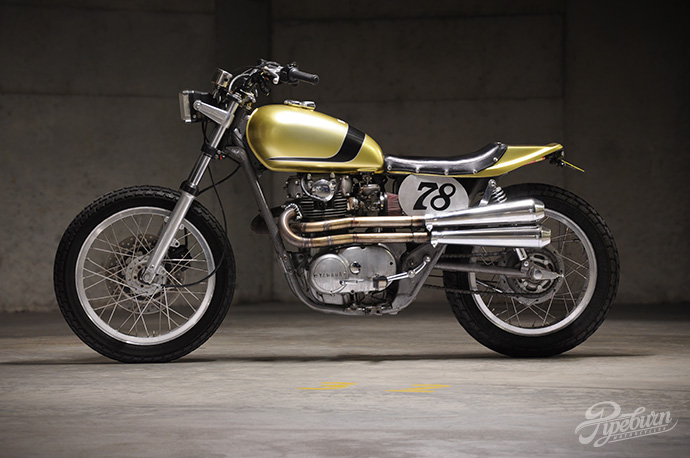 Ever caught one of those documentaries on TV where some unsuspecting Joe Average pays $1.95 for an “old painting” at a junk sale and ends up being told by some expert or another that he is the proud new owner of a multi-million-dollar Van Gogh? Or the spotty kid who gets given a dusty old guitar and amp from a dead relative and later realises he has one hundred large in mint 1952 1954 Fender Strat and Tweed Deluxe clutched in his sweaty little fingers. Never happen to us, right? Well looky over here and please do meet one very lucky Sydney-sider who goes by the name of Rob. Now when the rest of us combine beer, eBay and a “little bid to start things off”, we usually end up with something that looks a little like this. But not Rob. See, he had a tipsy mash of the “bid now” button and ended up buying a bike from Australia’s king of customs, Matt Machine. Pipers, say a big hello to Mr Ayres and the newest member of his personal rolling stock; the Matt Machine 1975 XS650 Street Tracker. “I had been looking at all sorts of classic and custom bikes for quite some time, I started falling for the vertical twin engines – especially the way they sat in hardtail frames. I started looking at XS650s as these seemed to have a reputation for being indestructible and a lot of people were turning them into all sorts of styles; bobbers, cafes, trackers etc. All so completely different, but still with that beautiful old-school twin engine. Somewhere along the line I decided that the XS was the bike I needed. It was going to be an original later model with hopefully not too many miles that I could then start pulling bits off and turning it into something I liked. Something comfortable with a bit of a classic dirt bike style, which I’m quite partial to.” “So after a while of searching on Bike Sales (Australia’s main online bike classifieds) and Ebay, and a few near purchases, I came across a really nice example. I started doing a little research on it, and began to realise that it was probably something a bit special; Matt’s name was one I had kinda heard before. I knew it would be a good bike; but it was also just the kind of bike I didn’t want it. I wanted something standard that I could fuck around with and see what worked and what didn’t. Anyway, as the final day of the auction came around the price was really low so I put in a bid that got bumped immediately. I came home that night, my fiancé was at a work function and I’d had a few beers by the time the auction was going to end, and I thought I’d just put in cheeky bid right at the end. And what do you know… I bought the bike! I wouldn’t exactly call it an accident, but it definetly wasn’t planned.” “Matt was fucking awesome. He offered to bring the bike up to Sydney for me, and even managed to hook up a roadworthy ticket for it just before I met up with him to get the bike. He seriously couldn’t have made it any easier for me. He’s a first class legend. So, I loaded it up on the trailer and off I went.” “The bike is loud. Really loud. And it vibrates like crazy. When it sits idling the chain shakes and even the forks bounce – I love it! The XS engine is no weapon but it’s nice and torquey, it pulls really well from low revs where as my dirt bike thrives on ringing the tits off it. But like my WR250, you can pin the throttle without being launched into the stratosphere. It gives me such a thrill kickstarting it, hearing the engine burst into life. It is kick-start only, as Matt removed the electric starter and I’m really glad he did.”

“I love the scrambler style stainless pipes Matt made for it. I love the dirt-bike style box headlight. I especially love the gold and black paint. The seat has about 5mm of padding yet is surprisingly comfortable. The whole tracker style seat assembly seems to suit the bike perfectly – it is just the right proportion compared to the tank and the end of it finishes at the perfect position over the rear tyre. Oh, and I love those freakin tyres! The bike looks like it was built like this in the 70’s – not like the trackers you see today which look kinda modern and plastic. I love the bike, but I hate the fact that I don’t think I could ever bring myself to changing anything on it… except maybe those tiny indicators. Even then I’d probably just take them off.”

We also asked Matt himself for a few words. Here’s what he said: “The XS came to me by default. A mate owed me money and so I took a couple of bikes from him that he had sitting around. He used to ride this one lots but had taken bits off it and neglected it badly for years. It took me a year or so of researching before I was ready to give her a shot. I had not done a Jap bike before so this was a first. I stripped it completely, thought about rephasing the motor but didn’t, so I just freshened her up and gave the box and clutch a once over.” “I wanted it to have a flat tracker shape so I remade the rear frame section, and altered a fibreglass seat section so that my mate Paul B could re-fibreglass a tailsection for me. Many new parts were sourced from Mike’s XS in the states and also from the XS Club in New South Wales. I repainted it in a style I hoped was a combination of 1970’s track racing and Yamaha original graphics. I did it twice but was really happy with the final scheme. I had the bike wired by a close mate Matt in sydney and then I set about running it in. It surprised me how smooth it was in the motor and the gear change too. I hope Rob is enjoying it!” No smart-alec summary from us. Just a quick observation on the bike. Of all the beautiful bikes that we’ve had through the Pipeburn photo studio, this one takes the cake for patina. Hopefully you can see it in the shots, but the thing is so beautifully aged it made us stare in amazement. From the sun faded tank, to the burns on the exhausts and the sweet matt finish on the rims – this bike had “real” in spades. Matt, we’re not exactly what black magic you have eminating from those greasy hands of yours but we’re glad you do what you do. Can’t wait to see the next one.