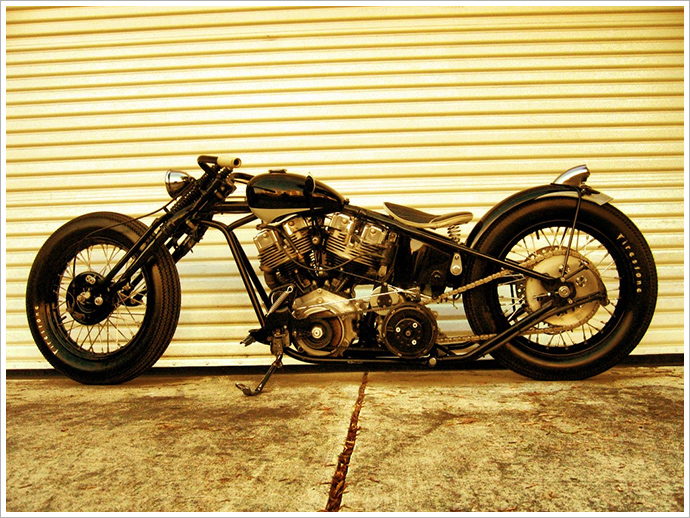 Show ponies. Trailer queens. Museum pieces. Forms over function. Style over substance. Fashion accessories. All show, no go. Collectables. Garage fillers. Props. Just for looks. Whatever you want to call them, you’d be hard-pressed not to admit that quite a few custom bikes aren’t really used as actual transport. Whether it be the bank-breaking paint jobs, the lose-your-mind loudness of the pipes, or the whole “it doesn’t matter – I’ll fix that after the photo shoot” attitude, there’s plenty of customs out there that can’t really cut it out in the big, bad world of, well, the world. But here’s one that fits into that pigeonhole like a tractor fits into your pants. What you are looking at in these here digital-type photographs is a custom that has been ridden day in and day out to the point that it fits Matt, it’s owner, like a pair of custom-made leather riding gloves. We’re guessing that’s more than most of us could say about our own bikes, and we think that most of them would be a touch less bespoke than this little gem. Ladies and gentlemen, pop it into top gear and relax those arms as we take a nice, long ride with Mr. Musial and his Garage Company bobber. Not exactly what you’d call a “sporty” riding position

“I had been hanging around Yoshi’s shop, The Garage Company, where he has always had a plethora of English and Italian café racers for sale and on display for a year (I’ve always ridden Trumpet’s). It took me a awhile before I wandered into the back shop where I discovered that Yoshi had a few stripped down bobbers in the works. I started talking to him about building me one of them and he let me know that there were three of his bobbers on display in the Von Dutch store on Melrose. I had a look-see and fell in love with them immediately and only had to decide which one of these beauties I wanted/could afford.” “I was tempted to build my own bike but the problem was that I didn’t have cash and the loan sharks won’t give you money for anything without a VIN number so I went the loan route. Yoshi has these two techs – Kyo and Suguru who are really cool guys from Japan and really went the extra mile to customize the bike for me.” “My helmet? I left it over there”

“The tank is a custom Garage Company piece. It’s 1.5 gallons only, hence the Bud shot. The engine is a 1980 Harley Davidson 80ci Shovelhead. When anyone asks me about the motor, I tell them its a Shovelhead Bowling Ball motor. I’ve been riding it now for 7 years including two “El Diablo” runs and several out of state trips. I since moved to Austin, Texas and now spend most of my time with European bike owners so am still riding quite a bit but have also commissioned a 79′ BMW Cafe bike to be built by Bill Twitchel at Revival. The BMW will be a nice change for out of state trips.”

“even though the rear wheel locked up,
the front end dragged me to a safe stop”

“The bike handles very well when you are going over 15 miles an hour due to the rake. Funny though – the rear tire swallowed the fender on three occasions and even though the rear wheel locked up, the front end dragged me through to a safe stop! I’ve welded a healthier mount since the last time. I was attracted to this bike due to the fact that the seat sits so low to the ground – it feels like your doing an ass skid the whole time! I wouldn’t change a single thing on this bike except for an oil cooler for the hot Texas summers.” Either that’s petrol in a beer bottle, or Bud have upped their alcohol content lately

We can’t help but think that in the end, the riding is what it’s all about. It’s obvious that most of us spend more than a token amount of time on the computer each day – no prizes for guessing that we ourselves are amongst the worst offenders. But you can bet your bottom dollar that when your family are standing around your “final” bed and the holy man is preparing to do what he’s been trained to do, you won’t be regretting the fact that you didn’t post enough witty comments on Pipeburn. But we’ll forgive you if you can’t help yourself just once more time. Off you go, then.