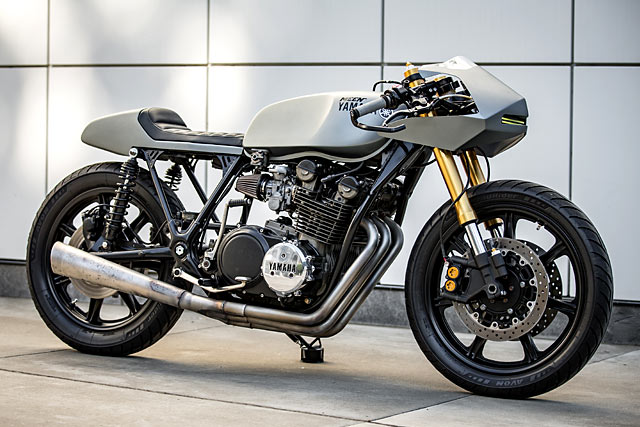 Motorcycles have an amazing way of getting under your skin. It seems that no matter how hard you try to forget about them, they’ll always bubble to the surface one way or another. For California’s Fernando Cruz, college and his own business took over from his love of bikes, but sure enough fate stepped in and the result was a slow and steady re-entry in motoland that finished with a racing job, an award from the Quail Motorcycle Gathering and this amazing Yardbuilt Yamaha XS750, built with his employer Meen Motorsports. “After college and my business, motorcycling unfortunately took a back seat to my adulthood,” says Fernando. “But in 2009 I became involved in local motorcycle club racing as a manager and engineer. Shortly after I was hired by Meen Motorsports and I found myself again surrounded by bikes. This filled a void in my life and I found myself wanting a road bike for my own use. I decided that it was going to be built, not bought.” “For inspiration, I focused on building a motorcycle that had a clear late ’70s or early ’80s influence. I wanted it to have sharp lines that could compliment the original XS750 tank, which many moto enthusiast have dubbed the perfect café shape.” [superquote]”I also wanted it to be different. I love the classic minimalist café look, but I wanted people to question what the bike was; I wanted to make people stare.”[/superquote] “Once I had the XS750 back at my shop in Sacramento, I began disassembly and categorizing what was going to remain on the bike and what would be replaced or discarded. First to go was anything that wouldn’t be reinstalled such as blinkers, mirrors and seat. The remaining OEM parts were evaluated, serviced or replaced. These included the rear brake assembly, throttle cables and wire harness. Once I had it stripped to a basic rolling chassis, I began to see the true lines of the bike.” “I knew I wanted to upgrade the suspension, so I went with some 2015 Yamaha R6 front forks with some MEEN Motorsports internals. I kept the factory 19″ XS750 wheel by machining up some wheel spacers that aligned everything and kept the R6 front brake assembly.  The new solo seat and pan was hand fabricated and all electronics along with battery cell were relocated underneath. The exhaust was left untouched and was just scuffed with s course sanding pad to achieve the weathered look you see.” “The headlight choice was probably the hardest to make. The fairing was designed with no intention of even running a headlamp. It would not be ’till almost the end of the build that the light bar addition was even considered. The fairing was plasma cut and then folded by hand with only a few small welds at the corners to hold the shape. The windscreen is completely hand fabricated. The LED light bar was then boxed in and it is a fully functioning light. The matte silver color was to mimic the look of raw steel. Ultimately I think the fairing is the centerpiece of the entire build.” “I spent many hours, even days, contemplating the next cut or the next weld. Often I was second guessing myself just to go back to my original plan. The execution of the design and in what order I would build it was a real challenge. In the end, I really tried to think outside of the box and come up with something different that is put together well and has real balance. That was the goal of my design.” “I am probably most pleased with the bike’s lines and geometric flow. I did not want to take anything from the original design. My goal was to exaggerate the vague details one may have overlooked at first and remove the obvious outlines of a motorcycle. It should be something that makes you look twice. My ultimate goal is to get a reaction from the viewer, good or bad.”