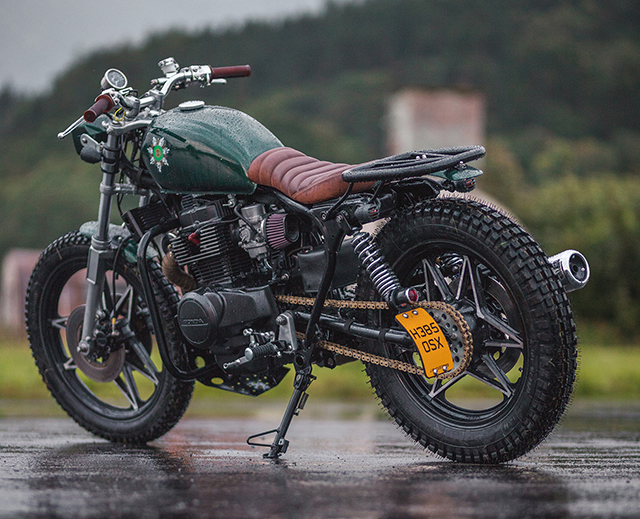 Last time we checked in with Scotland’s JM Customs, James Moir and his team had just completed a gorgeous V65 Moto Guzzi scrambler. Turns out, the customer that commissioned the Guzzi was so taken with the build, that he called on JMC to turn out another smaller, yet similar build as a surprise birthday present for his wife. “We started with a completely stock 1992 Honda CB450 DX that we had in stock as a potential donor bike. We wanted to create a stripped-back scrambler that had a vintage/military influence, blending modern components in with period parts in our usual style,” says Moir. Starting with the engine, the low-mile mill underwent a complete servicing, before being stripped down and repainted in matte black. The fins on the sides of the cylinder head were also polished for a little extra flair, and the carbs were vapor blasted, rebuilt, re-jetted, and given a pair of oval DNA filters. For the exhaust, the Scottish shop tweaked the CB’s stock headers and replaced the original muffler with an aftermarket megaphone. The new system was also covered in titanium heat wrap. 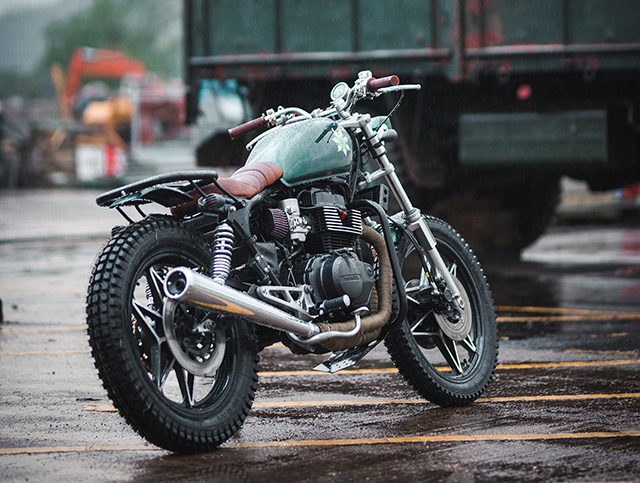 Protecting the six-valve motor and bespoke exhaust is a custom set of steel crash bars, encompassing the headers, while a bespoke Swiss-cheesed aluminum skid-plate further fortifies the 43hp twin. “We haven’t seen anyone do that with one of these bikes before so we really wanted to create something different,” James tells us. 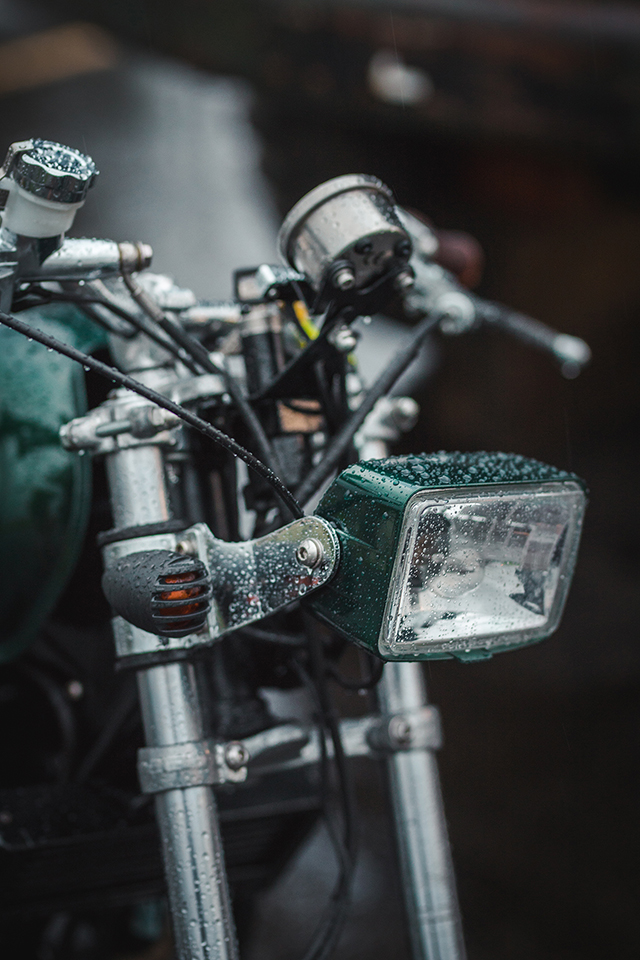 The boxy, stock tank was less-than-conducive to the scrambled neo-retro aesthetic that James and the gang were gunning for, so after experimenting with a number of options, they settled on a mid-‘80s Honda CD125 that was a bit worse for the wear. So, after relining and sealing the tank, JMC modified the mounting points and then relocated the petcock so it wouldn’t interfere with the new pod filters.

Next, four mounts were machined into the frame just behind the seat in order to accommodate a square luggage rack comprised of 1” tubing — which also supports the bike’s vintage-style fender. A lightweight JMT Lithium-ion battery now sits in a custom battery box cloaked in a leather cover, while the lion’s share of the remaining electrical components — which are run through an H-Box Module by Elektronic Box — have been crammed in a one-off tray directly beneath the seat. 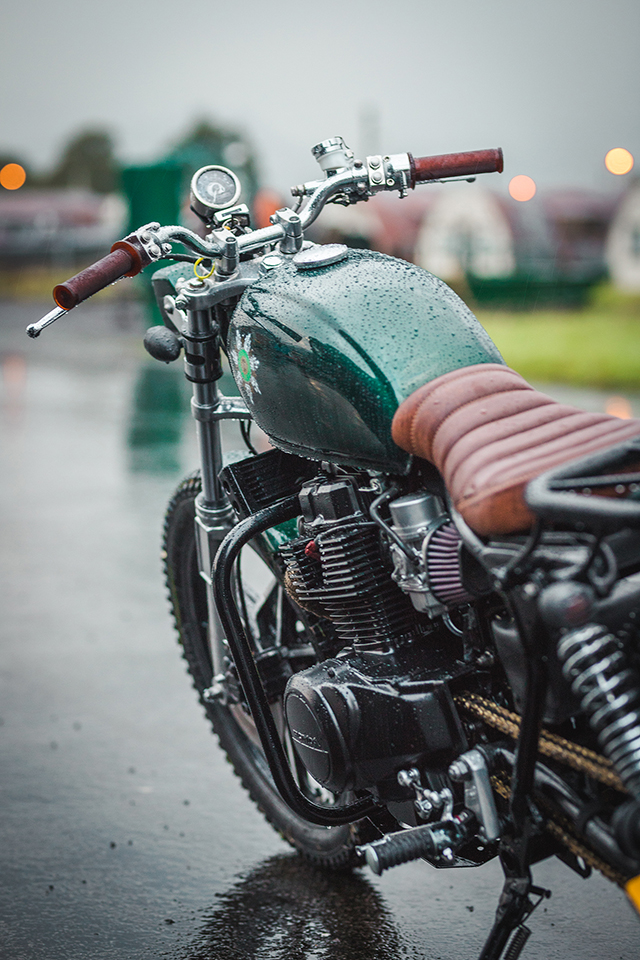 The subframe was hewed just behind the rear shock mounts and a one-off aluminum seat base was added along with a plush ribbed saddle complete with the shop’s logo laser etched into the leather. Not only does this markedly shorten the length of the CB, but it also reportedly lowers the ride-height by around four inches. 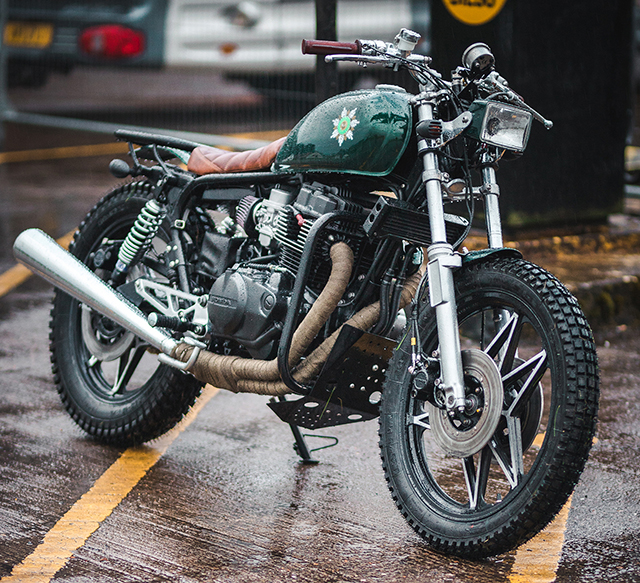 The 450’s factory forks remain, though they’ve been stripped and rebuilt, now sporting chromed sliders and powder-coated lowers. With the stock rear suspension affording less than four inches of travel, JMC ordered a pair of Hagon units. “These perform great, and have that vintage look, too,” explains James.

The original triple-disc brake setup received a similar treatment, being stripped and powder-coated in black. The stock lines were also jettisoned in favor of upgraded HEL Performance pieces and a short one-off fender now hugs the front wheel as well. 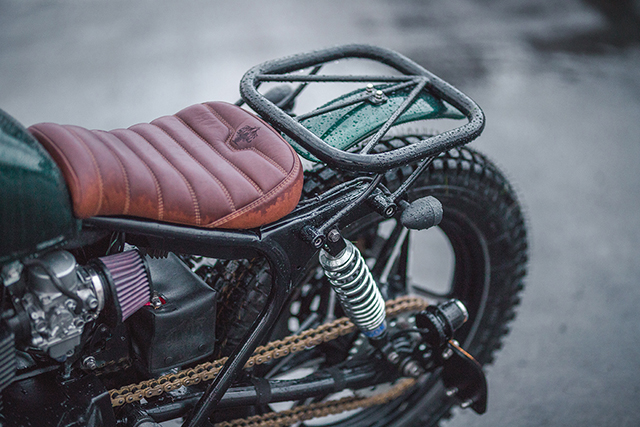 The front-end was also fitted with a square headlight with painted shell and chromed brackets. The name-sake component is complemented by a pair of square chromed mirrors. Turn signal duties go to old-school grilled orange indicators fore and aft, while a small round “prism” taillight rests above an off-set vertical license plate bracket underneath the left rear shock.

The rider’s quarters are now made up of low-rise scrambler bars with vintage levers, semi-opaque brown gel grips, and top-shelf Motogadget M-Button switchgear on both sides. The cockpit also gets a Daytona Velona speedo and a warning light bar mounted directly beneath. JMC also fashioned a custom pull choke that’s fixed to a drilled-out stock mount on the yolk that originally held the CB’s instrumentation. 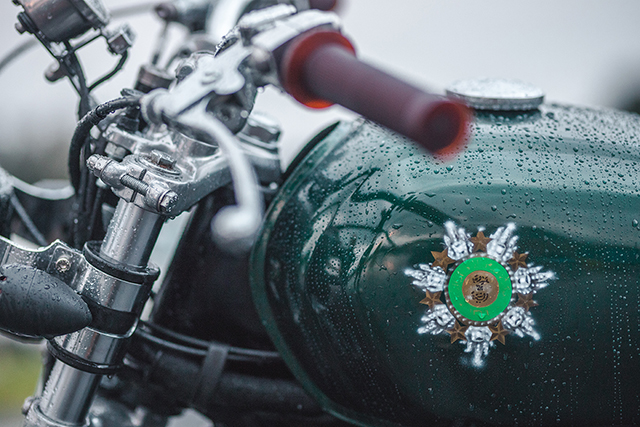 For the livery, JMC’s in-house artist, Aaron de la Haye laid down a metallic coat of British racing green — the same paint used on customer’s earlier Guzzi build. In place of traditional tank emblems, the build features airbrushed “Order of the Star of Jordan” insignias. For those that haven’t served in Jordan’s armed forces, the OSJ is a wildly prestigious medal awarded for merit, bravery, etc. Think ‘Medal of Honor’, or ‘Victoria Cross’, only Jordanian.

“Our client’s wife is from Jordan, and a member of her family was awarded the ‘Order of Jordan’ from the King which we are told is an extremely high honour to receive. So we wanted to make this a key feature of the bike,” says James. 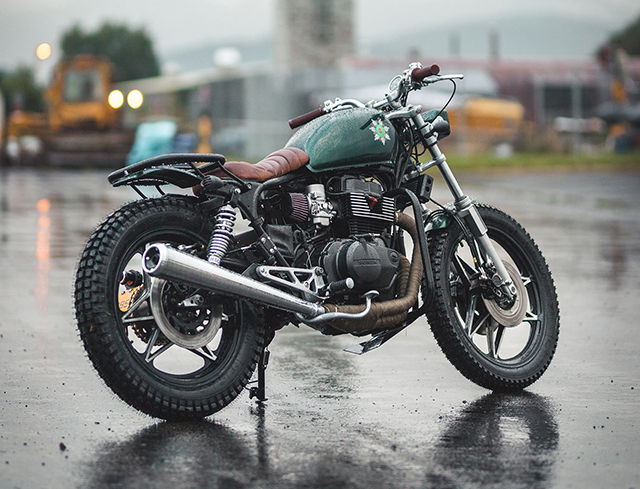 The stock alloy wheels were powder-coated in gloss black, prior to having the outer edges of the arms buffed away, resulting in a star pattern matching the design on the tank. The rims were also overhauled with new bearings and seals, and then shod in Heidanau K60 Scouts.

It’s not the biggest or baddest scrambler, but that was never the aim of the build. “This bike is just a cool wee bike! It’s a crazy transformation from the stock donor bike we started out with, and being able to take things we learn from our clients’ heritage and family history and incorporate them into one of our motorcycles is just cool as hell,” remarks James. 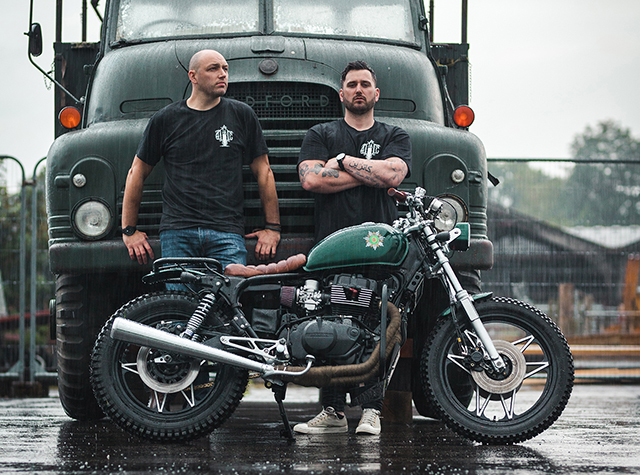