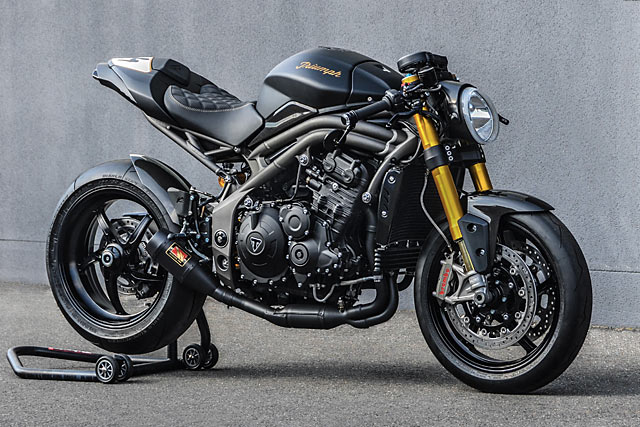 As much as I like the bikes featured on Pipeburn, sometimes I’m left wondering – what are they actually like to ride? They’re always cool as hell but sometimes I try not to think about what they’d be like to throw a leg over. Half an inch of suspension travel on the rear sure makes for a mean looking stance – but how would it fare over a suburban speed hump? That old air-cooled single pot 250 looks lean, but how far would you get on the interstate before your handlebars are being dragged out of the grill of a Scania? Well today we have something that’s meant to be ridden, and ridden hard – a custom Cafe Fighter built around Triumph’s exceptional Speed Triple R, made by Paris’s GB Motors 94. GB Motors 94 is a Triumph dealership doing business out of the south of Paris, France. And despite selling the latest in electronic-assisted road-going hoonery, they prefer doing their modifications the old-fashioned way. ‘We’re all about passion,’ staffer Nico Herrera says, ‘We’re not into computer assisted modelling.’ And their build process is decidedly French; ‘First we talk, we have a coffee and then we cut, we file and we drill.’ Which is a strange thing to do to a brand new 2016 1055cc Speed Triple. Despite being one of the quickest, best handling bikes on the market that actually has a thing called personality, not too many owners bother with modifications. Most just end up with a slip-on exhaust and an eye-watering amount of speeding tickets.

But GB Motors 94 is in a unique position. They’re the largest Triumph dealer in the area, and besides selling the usual mix of retro classics and that abominable plus-sized cruiser twin Triumph sell (I forget the name of it and I don’t care), they also customize motorcycles out of their workshop. And that worked out well for the owner of this bike, Antoine, who approached le guys GB with an idea for a build. He wanted a neo-retro cafe racer; something that was reliable, handled well and screamed its tits off when the throttle was ripped open. A bike that doesn’t need a carb tickle or string of expletives to fire into life every morning. Importantly, the Speed Triple had to remain completely functional and road legal to battle through the grey Parisian streets on a day-to-day basis. That means that the build, dubbed ‘Metal Speed Solid’, needed to retain items like the blinkers, mirrors, lights and the catalytic converter – all parts that get dumped quicker than a baggie in a police chase on most other custom motos. So if you’re after a story of a ported and flowed head, a frame that’s been cut and shut and suspension dropped on its ass then this isn’t the bike you’re looking for. This is much faster, much better handling and much more of a ‘riders’ motorcycle than many other modified specials you’ll see around the ‘net. Instead, what we do get is a masterful Cafe Fighter that is now firmly pointed in the direction of something a lot more classic and timeless than the donor bike.

[superquote]“So if you’re after a story of a ported and flowed head, a frame that’s been cut and shut and suspension dropped on its ass then this isn’t the bike you’re looking for.”[/superquote] It’s all achieved with some tidy top-end parts. It runs a Werks Performance exhaust and ceramic coated headers, clip-ons, carbon fibre hugger and chain guard. And in what has lately become compulsory for a spot on Pipeburn, German electronic voodoo masters Motogadget make an appearance, this time with their trick bar-end indicators. The whole thing is finished in a gorgeous flat black, highlighted with a decal that’s a quiet nod to the old Triumph logo, and set against one the prettiest seats I’ve seen on a streetfighter. And the result has been a resounding success for the team at GB Motors 94. ‘We noticed something funny,’ Nico says, ‘We’ve had positive feedback from people who don’t like the Speed Triple or even the Triumph brand! That’s really pleasing’. Now if you don’t like the Speed Triple then I don’t think you ever deserve to be pleased. But there you have it – a fast, reliable, gorgeous and legal cafe fighter that even people who are completely bereft in taste can appreciate.