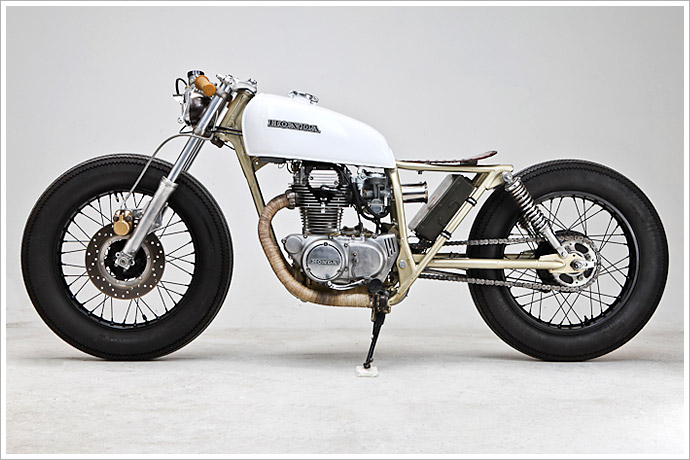 I have dreams for this humble little blog, I tell you. Big dreams. An mega corporation, we’d be. A campus with garages, paint shops, powders coaters, chrome platers and all the associated processes you’d need to make a great bike. And a test track – actually multiple test tracks. And a real English cafe with a large section of simulated 1950s London rind road and a free duke box with all the relevant rock ‘n’ roll racing hits on it. An office staffed by an army of literate bike freaks. Yes yes, I know. Most bike riders can’t read – but this is a dream after all. They’d be churning out cool bike posts for the blog every other minute. Thousands of posts a day. And each and every bike would be the coolest thing you’d ever seen. The blog would be so cool, you’d get a headache just reading it. Until that day arrives, all I have to keep the home fires burning is this. A piece from a guest writer, Dave Mucci on his mate Micah’s hella good CB 360 – all sent to us by photographer Patrick Daly. God – I feel just like a manager. I wonder if they’d mind me shout at them about some unimportant misplaced comma? I met Micah Vince a while back in my college days at Detroit. We were both into Volkswagens at the time and got to talking shop. Micah has been a VW head since he was able to drive, having owned and modified five of them to date. “I’d always been intrigued by motorcycles, but never thought I’d own one,” he laughed. A lonely 1974 CB360 sitting in a friend’s shed would change all that. Micah was raised in the northern suburbs of Detroit. He previously worked at a metal fab shop for 3 years, where he learned many trades. He currently works as a facilities and maintenance tech at the College for Creative Studies in Detroit, and has been doing so for the past 3 years.

Here’s Micah on the build. “I couldn’t have done this project without the CCS shop and all the equipment we have there. Most of the fab work went on in the facilities shop at CCS, where I work during the day. I’d stay late at night or come in on the weekends and do some welding and grinding. We have a sandblaster that could fit in a love seat which allowed me to blast my frame and wheels before paint.” “The motor was re-ringed, received new gaskets,
and was reassembled in a hotel room”

“The motor was re-ringed, received new gaskets, and was reassembled in a hotel room. My buddy Jeff Schmidt was in town from Brooklyn. He has rebuilt many an old Honda motor, so we decided to do all the work down at the DoubleTree hotel on Lafayette in Detroit. I’ll never forget the look on the woman’s face at the front desk when we rolled an assembled motorcycle engine out on the luggage cart.

The final assembly of the bike, and making of the wiring harness, happened in my living room. It was February, and I don’t have heat in my garage, so I decided to do it inside. Thankfully I have awesome roommates who are understanding. It was really a nice way to do it, actually. When it was done, we just rolled it down the front steps and away I went.” Micah’s inspiration for the seat came from the aesthetic of weathered Brooks saddles. He set out to build it by hand, first mocking it up with a piece of Masonite. Using a plasma cutter, he traced the shape in steel and sent it through a roller until he was happy with the contour. A buddy of mine cut me a piece of the thickest cow ass he had, and I used copper rivets to attach it to the seat pan.

I’ve personally sat in this seat and can attest to the butt-hugging perfection and comfort you wouldn’t expect from it’s minimal appearance. Putting to use all those years of fabrication training, Micah set out to build some custom bars using chopped off stock handles and the clamps from a donor lower triple tree. He also extended the swing arm out an additional 5 inches. The new length required him to extend the drum brake holder and actuator rod and swap the rear suspension out for some stiffer units off a CB550. The WWII first aid box houses his battery and the stock ignition was mounted to the side. When asked if he would ever sell it he noted, “I’ve asked myself that, and to be honest I’m not sure I know. On one hand, I think if someone came along and was interested enough to offer me something outrageous for it, I would. On the other hand, it’s my first bike and my first build, so it would be kind of cool to hang on to it for a while.” Ahhh. Too easy! I’m going to have to do that again. Again, thanks to Dave Mucci from motomucci.com for the story and Patrick Daly from patrickdalyphotos.com for the pictures. And a big pat on the back to Dave, who just won best Best Custom Bobber at the Chicago Tone Up Rockers Versus Mods show. Congrats, man – you sure earned it.