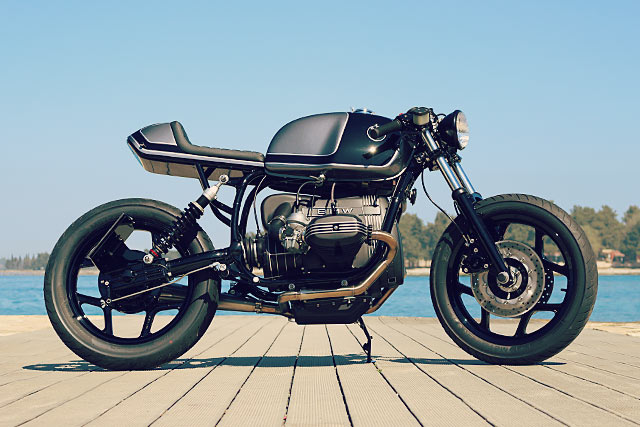 I started my bike building journey in Croatia in 2002, when I had the urge to change something on my bike because I wanted it to be a little special and not just a boring, stock ride. Later, my first real custom build was shown in the European magazine ‘Custombike.’ For me, this was a real milestone in my life, and it pushed me to start my own custom bike company so I could do what I loved full-time. I’m a one man show and I try to do everything myself. Far from being a chore, this was a dream come true for me as I always wanted to work with my hands, even as a child. My vision for the future is to build pure, stylish motorcycles of all kinds for customers globally. If I can bring them joy when they see and ride my bikes, I’ll be happy. I like to challenge myself with every new project I undertake. For this one, I decided to modify a BMW with an air-cooled boxer engine and a monolever rear shock; to transform something ordinary into something great. Of course there are so many custom builds of these types of BMWs out there, so I wanted to make my own mark. And for me, there was only one type of bike that I wanted to make out of it. A real cafe racer. On my search for a donor bike, I scoured what felt like the whole web for it. Finally, after many weeks, I saw an unhappy BMW that was really begging me to bring it back to life. It had that typical German military paint scheme on it that we’ve all seen a million times, but it somehow looked quite authentic. I wondered what story was behind it, so I did a little investigating. Turns our that the owner had in fact bought it from the German ‘Bundeswehr,’ or armed forces. This was the moment I decided to buy it, as I knew that the engine and other parts had to be in pretty much perfect condition. Then last year in November, I started the project. I called it “The Bulldog.” It was my first thought when I saw the BMW with the air-cooled boxer engine. I began by stripping it down. The huge saddle bags came first, and the rest of the bike soon followed. In a few hours everything that didn’t belong on the bike was peeled off and discarded. The old footpegs and exhaust mounts were ground off. Now you really could admire the potential of the bike. But before anything, I had to design the new rear frame. I mocked it up with cardboard and wood to help me get the right shape. After that, I had to lift the tank. And when this was finished, I realized that the front end was too high, so the fork had to be shortened to continue the bike’s visual line. Next came the construction of the rear frame. After everything was firmly welded, I began to plan the new position for the footpegs taking into consideration the new seat height. Then came the seat and tail section. I decided to make it out of sheet metal, which naturally took me a lot of time to get it exactly to my liking.

The old top triple was originally made of 4mm thick steel, but this was replaced by a high-strength CNC’d aluminium piece which the local guys at the ‘Retrofit Collective’ produced. Then, various mounts for the headlight and the other forward-facing equipment was made. This included some brackets to attach a set of Motogadget m-blaze pins. The brake light was fitted into the rear frame. Lastly came the exhaust manifold, which I made entirely from stainless steel, and finished off with a Spark silencer. Now everything was prepared for painting, and I mocked up the colour scheme and saw it through from primer to gloss finish. Some other small things to note. The starter cover and filter cover are from a previous model. On the engine itself, I pretty much changed nothing, since it was running perfectly and was clearly well maintained previously. With that said, I did overhaul the carburettors. The final assembly was relatively easy. During this process, A second brake disc was added to the front rim and the calipers were completely overhauled. Finally, I replaced the original rear shock with a fully adjustable unit by Wilbers. For me, the most beautiful part on the new bike is the rear frame, which completes the line from the rear of the seat to the front end. It nails the café racer look, and also prevents that ‘fromt up’ engine look that many R-series BMWs have. I’m also pretty happy with the paint job, as it is beautifully done and it perfectly matches the bike’s visual lines, too.