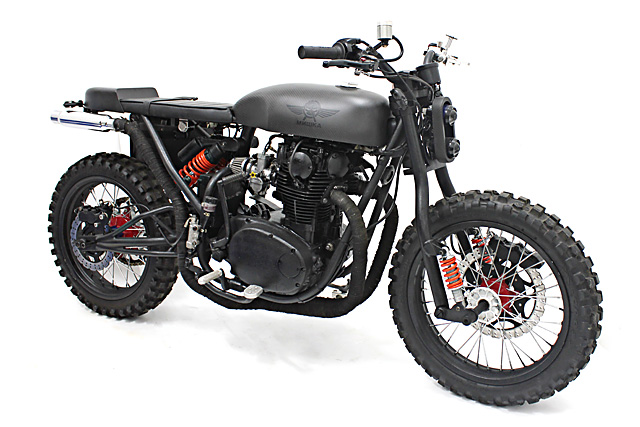 Karma, the sum of a person’s actions in this and previous states of existence viewed as deciding their fate in future existences, is an idea that is shared to varying degrees across many of the world’s religions, philosophies and the basics we teach our children. Do good in the world and eventually the seeds you sow will bear fruit for all to enjoy, you included. The owner of this custom creation is a man who lives by that very philosophy and sold his motorcycle so that he could pay for disadvantaged children to go to school and have a brighter future. But it appears his Karma was nearly as instant as John Lennon describes, for his friend is none other than Bandung, Indonesia’s Ram Ram Januar from White Collar Bikes. Who decided his friend’s good deeds deserved a tasty reward and the Indonesian bike building wizard has created this delicious piece of fruit, a Yamaha XS650 powered custom known as “Mishka”. When Ram got talking to his bike loving friend and found out he had sold his motorcycle for such a worthy cause he enquired if his mate would remain bikeless forever more. The answer was a little 50/50, he had an XS650 engine and maybe one day when his good deeds were done he’d build himself a custom using the Yamaha lump. Immediately Ram got thinking, “I have so many left over parts at my garage and look at them unused so I feel obligated to use all the parts into a good use so I contacted a few friends and ask them to donate more parts so I can build a bike for this guy.” All his friend needed to do was hand over the Yamaha engine and Ram would take care of the rest and boy he didn’t let him down. But it wasn’t all smooth sailing, starting with a collection of spare parts and assembling them into one incredible ride is no easy task. At first Ram took the XS donk and placed it into a Suzuki GT Frame and fitted up a set of Triumph forks. “But I couldn’t find it interesting enough for me design wise. So I ditched the GT frame and I decided to build a new frame myself.” The frame alone is truly a unique custom creation made from seamless steel tube that features a large curved single backbone and twin down tubes front and rear that work together to create a cradle to support the frame. There is a cross brace between front tubes for extra rigidity and the tuning fork styled rear section of the frame ensures the weight is kept as low as possible. Having drawn up the design of the entire bike, there was of course a lot of trial and error but Ram knew the shape and size of the subframe he required and this was the next item to be fab’d up in a classic design from the same diameter seamless steel. Having built custom frames before Ram knew exactly where to add brackets and mounts before applying the final coat to avoid having to take two bites of at cherry. The XS650 engine bolted straight in and everything lined up exactly where it should with the front mounts secured in the down tubes cross brace. It’s with very good reason that this extra engineering went into the frame as what Ram discovered was the previous owner of the engine had taken it out to 750cc, sure there’s more power but it also comes with extra vibration. Before turning his attention to the bolt on side of things Ram gave the whole engine the murdered out look spraying it from top to bottom in black heat proof paint. Feeding the big bore twin enough fuel required a carb change and fitted up with chrome pod filters they’ve been tuned to match the engines overall specs. The exhaust is another piece of White Collar Bikes custom fabrication with a heat wrapped two into one system running under the engine and then up the right hand side before finishing out in a high mount single chrome muffler. With that extra power to handle Ram also converted the clutch to hydraulic operation by grafting on the components from a Ducati Diavel. With the custom frame up on the bench and having rejected the Triumph front end he was going to use, Ram couldn’t see anything lying around the White Collar Bikes workshop that took his fancy; the decision was made to make the suspension front and rear himself too. The front forks are Ram’s own interpretation of a leading link design that offers great stability, particularly when braking mid corner. The forks themselves are solid steel with integrated triple clamps that much up to the custom headstock that Ram used. While the lower link incorporates the front axle that is then sprung by two heavy-duty mountain bike shocks, one either side. Out back Ram was ready with welder in hand to create a one-off swingarm to match his custom frame, rather than using aluminium or large box section steel it’s crafted from multiple pieces of round bar that provides excellent rigidity without the weight. Having created such a unique front end Ram matched it out back with dampening taken care of thanks to two remote reservoir adjustable shocks, “it’s my first time to use dual shocks for the swingarm so many hours were spent in trial and error for this configuration but it’s worth all the effort” and it looks trick too! Braking front and rear is taken care of thanks to single drilled discs at each end, with the front clamped by a KTC Racing caliper using custom mounts. With his mates telling him he builds “Pretty” bikes Ram wanted to continue the rough and rugged look of the build and the chunky X-Cross rubber keeps the theme going perfectly. But look closely and you’ll see the hubs have a special touch. With Ram’s friend married to a Russian woman it gave him an idea “I painted red and white for the font hub representing the Indonesian Flag and red, white and blue for the rear hub to represent the Russian flag”. The last of the major components to be built for Mishka are no less impressive and having created some incredible one-off carbon fibre parts in the past Ram went back to that bag of tricks once again. Sitting atop his custom frame is a one-off carbon fibre tank with a ’60s British feel that works perfectly with the parallel twin-engine configuration and old school leading link suspension. The tail-piece is also hand laid carbon fibre and with the cowl being relatively small the long and low leather wrapped seat could easily fit a passenger with a squeeze. The footpegs are hand turned on shop the lathe, so too the knurled shifter for an old school feel. But the front headlight is anything but, the twin LED projector lights give a menacing face with their carbon fibre shield and the skull pattern indicators don’t exactly help to put passers-by at ease. To finish things off Ram fitted up a nice set of bars that wear new levers and switch blocks and then ran a custom wiring loom to feed the mix of LED lights and old school engine, with the battery hidden in a custom box. Never one to forget the needs of his lucky friend he also added mounts that hold a classy leather satchel bag for a trick final touch. But given his generosity I’ll give Ram the final word, “there is nothing much to say about this bike actually, I just build this bike for free to help a fellow biker who sold his bike for a good cause and I enjoyed the build, every minute of it. Many of my friends say that why would you give this bike for free? Because a few people already want to buy this bike and they’re offering a very good amount of money for it. I said it’s not for sale… for me you don’t need a reason to do good things, I believe in Karma!”