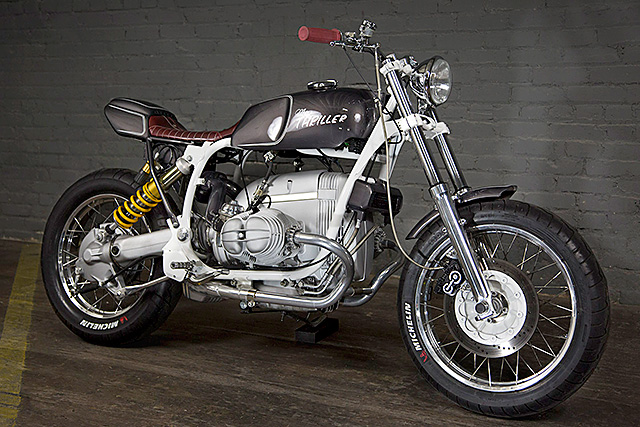 In the global movement that is the custom bike scene you don’t win Best Cafe Racer at the VVMC Rally and be a stand out as an invited builder to the One Motorcycle Show unless you not only build incredible machines but understand the ethos behind the movement. Ask Ken from Spirit Lake Los A what the mantra was when designing this exquisite 1992 BMW R100r and he responds with “Anything that it does not require, it does not have!”. But to take a clunky German retro tourer and turn it into a masterpiece also requires a fabricator who can build show winning form with traditional cafe racer function and Brian the other half of the SLC team knows exactly what that means “The ultimate goal was to have something that looked vintage but at the same time road like a modern bike”. It’s little wonder then that two men with such abilities and understanding of their goal achieved such an incredible result in this LA built Bavarian beauty known as Miss Thriller. In a nod to the original cafe racer period the styling cues come straight from the top shelf of automotive design, Jaguar’s famed E Type. But before the classic lines could be added a whole lot of excess weight and unwanted items had to be stripped off and thrown in the bin. The weight saving alone is tremendous but what it allows for is a total fresh take on an airhead custom. The frame has been rid of all but the essentials before being powder coated in gloss white to match the pinstriping to come and really let the tins do the talking. The tank is taken from a Norton Commando with modifications to fit the frame and the addition of the ignition switch, while the rear is gently reshaped to match the lines of the BMW. The custom subframe, shortened and hooped, houses the one off tail section that serves many purposes; the speed drilled unit is where the exhaust exits, the LED tailight sits and the whole unit is design to match the tank and the front end. The front section has had a number of incarnations, previously wearing a single fabricated surround it now sports a Triumph headlight, powder coated triple clamps and beautifully polished off risers for a minimal and refined feel. The front guard was hand made and the oil-cooler shroud does a remarkable job in turning a purely functional item into a pleasing aesthetic addition. Then it was time for the Jaguar inspired gunmetal grey to be laid down only on the custom metal work allowing it to take centre stage. Breaking up the classic paint is the neat double pinstriping once seen on old school BMW’s brilliantly executed by Lefty’s Pinstriping who did it all free hand. The finishing visual touch is the spectacular custom seat, oxblood leather and a pattern that mimics the Jaguar E-Type Lightweight race cars from the 60s adds more than a little Pebble Beach level of quality. With all that weight saving the torquey 980cc air-cooled Bavarian boxer becomes an even better engine with pulling ability in any gear from near idle. But that’s about where the similarities to the original engine ends, the airbox is replaced by a custom made cover that houses the starter and the coils and gives a drastically cleaner look and one that pays homage to the early airheads. With no airbox the twin Bing carbs now breathe through a hot rod inspired two into one inlet tract that would make the Ring Brothers proud and is finished out in a single muscle car air cleaner. The pipes are painted in the bodyworks Jaguar hue while the the engine and rear drive where all media blasted and treated to a high temperature resistant matte silver finish. The exhaust is no longer those bulky BMW under slung mufflers the factory so often use but one of the great pieces of automotive art in the custom scene. Built in house, the fully ceramic coated pipe work starts at the detailed and polished flanges that exit the iconic airheads but things really get interesting once a single pipe exits the collector box. From here the single pipe heads towards the custom tail section were millimetre perfect fabrication allows it to exit to the rear. But it’s Ken and Brian’s team work of design and execution that delivers the finishing, brilliant touch that sees the single pipe become two exits creating a symmetry flawlessly aligned with the two pipes that begin the rearward journey from this twin boxer beast. It not only unleashes the sound that all boxers deserve but the use of the single pipe rear between the collector and tail balances out the side mounted monoshock leaving neither side lacking in aesthetic detail.

The suspension and braking is in keeping with a thoroughly well thought out design that does everything better than it once did. One of the first changes you should make to a stripped down track bike is an improved rear shock and although this BMW does its best work on the streets the reason for the rear shock change is the same as a track day warrior. Standard shocks are designed to handle the stock weight and provide a comfortable ride, with Miss Thriller having been on a serious diet she now wears an Ohlins rear unit with all the adjustability to make her road manners perfect for her slender figure. Up front the GS style forks have been lowered a few inches to get the stance just right and handling is vastly improved with the fitment of progressive rate springs. Braking is courtesy of a 285mm drilled disc that does the job perfectly and grabbed by a Brembo caliper that BMW wisely fitted as standard with the addition of a braided line it’s consistant stopping every time! The finishing touch comes in the form of spoked wheels for a truly classic look, but with outside lacing into fully polished rims they allow for the fitment of modern tubeless Michelin rubber and that vintage look with new bike performance theme is complete from start to finish. So what’s in the name then? It comes from a cursed speedboat that once roamed Spirit Lake in Iowa where Brian grew up. In the 1920’s it was the fastest thing on the water but following a host of misfortune it finally crashed killing everyone onboard. Of course most riders would be far too superstitious to wear such an unlucky name on their tank, but when you build bikes this good the gods have definitely lifted the curse on this Spirit Lake!