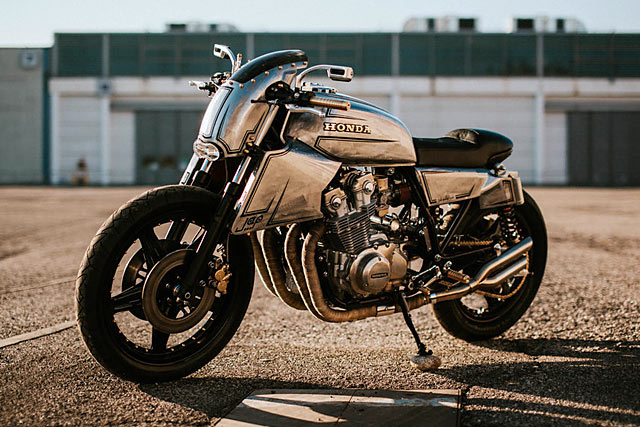 Steampunk bikes. Usually, they’re much more steam than they are punk. And more’s the pity. If the thought of a 19th Century Sid Vicious on a bike tearing around the streets of London pushes your buttons as much as it does ours, then we’ve got just the bike for you. Fresh off the bench of Milan’s Rustom workshop, it’s ironically named ‘Just Another Punk’ as a tongue-in-cheek tilt at steampunk builds. And that’s because this Honda CB900 packs a punch that is anything but hot air. Rustom is a motorcycle workshop near Milan in Italy’s north. We spoke to Mattia, one half of the team. “I’ve been a mechanic for 10 years,” he says. “Previously, I worked for an official Triumph dealer in Lodi as mechanic and workshop manager. I’ve always had a passion for vintage and antique motorcycles. I met Zac, my business partner, during an official Triumph contest and we built a bike called ‘Neverland’ together. After that moment, we decided to quit our jobs and open Rustom in September 2015.” Rustom is a full service workshop for classic and modern motorcycles, a meeting point for a lot of bike enthusiasts and increasingly a big family of customers and friends. Zac is apparently able to build pretty much anything he likes with metal. He is the craftsman behind the chassis, fairings, bodywork and pretty much anything else they have in their weird, creative minds. “The project, which we called ‘Just Another Punk,’ or ‘J.A.P.’ for short, began with an old Honda CB900 Bol D’or from 1980. We found it in Northern Italy, abandoned and rusty, and decided to bring it back to life. Or, more accurately, to give it a second life to valorize our metalworking skills and to produce something unique and never seen before.”

“The name’s a kind of joke,” says Mattia. “A joke implying that this is another typical steampunk motorbike, but hopefully it’s not that at all. To us, it’s a mix of modern technology and traditional building techniques, brass details, a vintage engine, modern performance and all wrapped up in the creative concept of a café racer. Also, every motorbike we build is made for a customer; we never built them for ourselves.” [superquote]“He also stipulated that he wanted an unpainted metalwork finish and, as you can probably see, we did it in spades.”[/superquote]

The building process for J.A.P. began with a long discussion about mixing conceptual style and practical everyday use for two people, as that was the only firm request made by the owner. “He also stipulated that he wanted an unpainted metalwork finish and, as you can probably see, we did it in spades.”

During a long discussion about the build, the boys revealed many of the Honda’s killer details. The custom tank was originally sourced from a CB650 Honda and it goes amazingly well with the seat, an Alessandro Starace Design custom unit. There’s numerous tasteful brass touches including on the grips, footpads and rocker covers.

The bike was completely rewired, and the obligatory Motogadget tech was plumbed in, with a Motorbox V2, Motoscope Pro display and a set of their handlebar switches, too. There’s also a handmade exhaust system topped off with twin Danmoto mufflers, some Rizoma mirrors and two YSS custom shocks. And it all rolls into town on Continental Classic Attack tyres. “The best part? It might sound a little geeky, but we had the idea of finishing the Honda’s bodywork with a transparent coating and then painting the inside parts of the body dark red. It’s a little crazy, but imagine an inside-out Bol D’or racer. We’re also really proud of the LEDs  integrated into the side panels.” And so they should be; the results speak for themselves. We can’t wait to see what they do next.