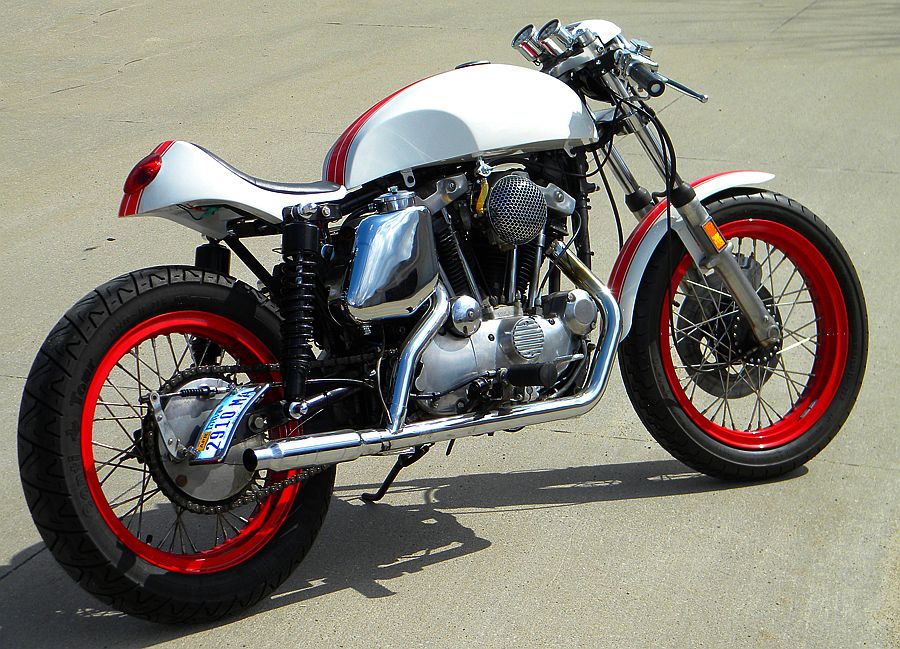 We were sent this fantastic Harley Sportster Café Racer by Nolan Woodbury from Vintage Motorcycles Online, if you haven’t visited his extensive site you’ve been missing out. This stunning Ironhead is owned by Ron Gee who is a photographer from Iowa. Gee has always been a big fan of British and Italian motorcycles so the thought of creating a Harley Café Racer wasn’t really on his bucket list. “I didn’t wake up one day and say ‘I’m gonna’ build a Harley!” remembers Gee, “I was looking through Benjie Flipprbo’s café racer site and while admiring one of his fiberglass tank and seat kits, the idea of fitting that over an old Sportster popped into my head.” After looking around for a while, Gee eventually found the perfect donor bike, a 1976 XLH which was mechanically sound and ready to accomodate his radical plans for it. He decided to take a more humble approach when it came to the pipes: “I wanted the exhaust to disappear. After a good search I found this two-into-one muffler system offered by J&P Cycles. If I find one that’s even less conspicuous, I’ll buy it”. The seat and tank are obviously from Benjes Cafe Racers, although the seat has been slightly modified from the original BCR fiberglass tank and seat combo. Overall it’s a great looking Sportster and hopefully will inspire more people to use Milwaukee iron for café racer projects. To read the full article and see some more tasty pics of this classy bike visit VMOL.