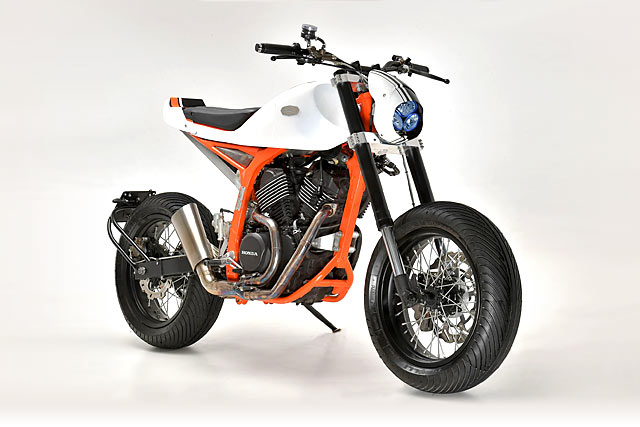 There’s something undeniably cool about a bike that can go anywhere. Whether it’s secretly stroking your zombie apocalypse fantasies or it’s just a reminder that life shouldn’t just be about your job and mortgage, every rider should have at least one mountain eater in their garage. But until recently, there was pretty much zero chance of ever finding a cool one – unless ’80s fluro graphics and wall-to-wall plastics spins your wheels. But thanks to shops like Italy’s Emporio Elaborazioni Meccaniche, we now have options like this Transalp they call ‘Cobra’. Who needs to move mountains when you can just ride over them? The customer came to Dopz and the team at EEM with an old, rusted 1987 Transalp that had apparently spent the last four years both out in the open air and near the sea. In some countries, there’s laws against treating bikes like that. “He then told us he would like it modified into a powerful muscle bike that, ‘Should seem like it can ride over walls.’ Just as well we like a challenge.” Most builders will tell you that this particular Honda model is a hard bike to modify. It’s mainly due to the frame, the engine’s position, the abundance of asymmetrical parts and the two radiators. Now mix all that up with tons of rust and you can begin to understand the job at hand.

“Pretty much nothing from the factory was useful, apart from the engine. So we took our time and waited for inspiration to hit. After a few ideas and some sketches, we decided to throw away 99% of the bike. Then, after several months, we were ready to start building.” As one team member started rebuilding the engine, the rest of the them took a part of the old frame, a spare Honda tank and a lot of modelling clay to build themselves a good old-fashioned clay mock-up.

“We decided to make a one-piece seat and tank shell in carbon and fiberglass, so we built a small frame to support it. Then we realised that we could have the bike open up like the hood of a sports car. As you’ll notice in the photos, the tail also has to rotate back to allow this to happen. Once open, you have access to all the electrical parts and the radiator. The opening process is helped along by a pneumatic piston.” “We then re-engineered the Honda cooling system by installing one big radiator protected by a tough steel mesh at the rear of the bike. It’s cooled from both sides: one by a fan under the seat and the other with the passing air which, although slightly counter-intuitive, does create a good amount of air exchange.” Next, some Motogadget m.switch mini buttons were connected to a completely new wiring loom. As a nice little touch, they made the bike’s new ‘key’ from a finger ring. The owner simply places it on the side of the seat and hey presto. Then to turn off the bike, there’s a secret button on the side. Nearby, the rather cool new headlight and fairing was made from three individual LED units surrounded with more carbon and a modified VTR fairing. The bike’s fueling has been totally reworked, too. New repositioned Mikuni carbs are fed by new filters and fuel lines, and the enduro’s air is now cleaned by a cool-looking K&N sardine can. Next they machined up an oversize triple-tree so they could have a 180 section rain tyre front and rear. Remember, this bike is not intended for corner carving, but more for quick sprints and a softer riding experience.

”For us, the Cobra is more than a special or modified bike. It’s more of an all-round prototype. And something that’s been engineered, powered, lathed, machined and designed totally by Emporio.”

“‘The name comes from the tank; we think its shape looks like a snake’s head. The bike is incredibly light and powerful, thanks to all the engine mods and the weight loss. And it’s really easy to ride despite the larger tires. Finally, we decided to paint it in two colors – black and white – because this enduro has two souls. One is aggressive and sporty, the other is elegant and minimalist.”