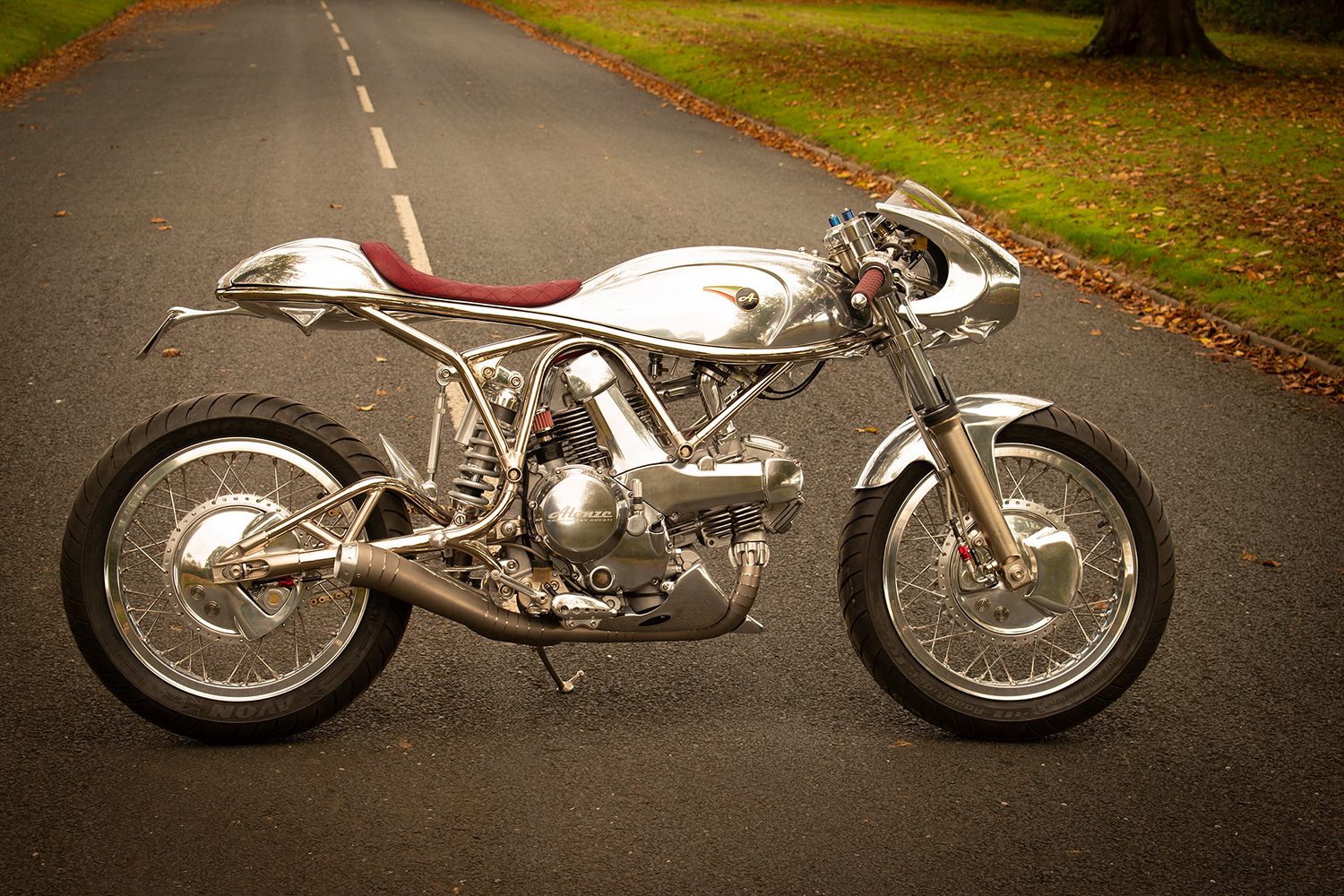 Some people get excited about the impending release of their favourite band’s new album, others in a spin over the trailer for a Spielberg coming attraction, but for me, what has me counting down the days with excitement and anticipation has become the release of a new build from the UK’s Alonze Custom. The Hendrix like creativity, the Pink Floyd experimentation and the punch in the chest of solid goodness like AC/DC at their hard rocking best. Jim Alonze is a hard-working man, a master craftsman in a blue-collar business, but at his core, he’s an artist as good as any. With the same doubts, late night inspiration, self inflicted torment and ultimately the genius that are marks of the best. All of which is combined into his latest Ducati 750 masterpiece, a family inspired affair that his sister calls ‘The Underwater Sea Bullet’.

Last year we featured Jim’s Ducati 600 to rave review, and it was met with the same applause across the internet and when on show at the Bike Shed. “I wasn’t too keen on building another bike, building a scratch built bike in your spare time over a six month period really takes it out of you! It’s stressful at times and during the build, I often question why the hell did I start this, or why didn’t I do a simpler design. When you finish the bike it’s a great feeling and a massive relief that its finally done. And there is nothing further out of your mind than building another bike from scratch,” Jim explains.

But as is the way with all artists, the four-hour drive back home from London after the bikes successful appearance at the show gave Jim time to think. He made the decision that if he was going to build another scratch custom, he’d do things differently again and take the chance to once again learn new skills. All of which started when he thought about the fact people don’t ever really do full on custom brakes. “So, I thought back about 18 years to an old eighties CBX 550 that my Dad used to have. They had ‘inboard’ integrated discs that had vented aluminium covers over them, they almost looked like drums.”

After finding the CBX’s old manual, Jim studied the pictures and sat down with a pen to draw the design for the setup, twins up front with custom made four-pot calipers and a single on the rear with a two-pot caliper. Working on his 60-year-old Beaver mk1 manual mill, Jim produced the hubs and calipers by hand, no fancy CNC machinery here. “Once the hubs were complete, I had custom spokes made to lace them to the 18 x 3’’ Borrani rims. I sent a drawing to ISR brakes in Sweden who machined me the custom reverse discs.” Then with the stock suspension and swingarm in the Ducati frame, Jim made the covers to look like drums.

Turns out Jim had the wheels, brakes and yokes all finished before the design of the bike, all of which is based around the engine from the donor, a 2000 Monster 750. Then it was time to sit down with a felt tip pen, draw up the bike and get to work. But rather than make the frame and swingarm from Stainless Steel as he’d done before, he chose to go with Nickel coated Mild Steel for the challenge. But even the process would be different, “I set about machining and fabricating sockets that the frame tubes would slip into and be brazed into position,” Jim tells us. Then good mate Dee of Allenchrome took care of the stunning nickel plating.

As it turns out the result was similar to something his Uncle had seen many times before, “he told me of a bike my Grandad once built, a Rudge Ulster, apparently it was ‘polished up to the nines’ and the frame and tank were all chrome plated. A true ‘crowd pleaser’!” This only spurred him on and the next task was to make the body work out of hand-formed and polished aluminium, quite simply it’s a work of art. “The little winglets on the front fairing actually house the turn signals, people have said that they look a bit like whiskers on a catfish, the top half of the tail section has been compared to an Abalone shell and the sides panels are kind of shark-like.”

Which all helps to explain the name, what you’re probably wondering is where the fuel filler is? The answer, under that stunning red seat, which lifts up on a hinge and a mini gas strut to reveal the fuel cap. Then there are the extra touches you start to notice, small brass badges all over the bike, each of which was engraved by Jim’s Uncle Mark. “The screen on the nose fairing was also blow moulded in house, with a subtle black mask around the bottom with the gold Alonze ‘A’ upfront.” While sitting on the custom bars are some of the only parts not made by Jim, Oxblood Biltwell grips and Motone switchgear to operate the full suite of Motogadget electrics.

“The motor was completely stripped and cleaned and polished then re-assembled. I have rounded off all the corners on the cylinder fins to give the motor an older, smoother look.” Then Jim does what he does best, build one of the best exhaust systems we’ve ever seen. The pipes themselves are titanium that have been hit with a vapour blaster to give them a satin finish, allowing the perfectly laid down welds to take centre stage. “I made billets end caps for the megaphone silencers and machined out some one-off finned exhaust clamps which look really cool.” Jim’s grandad used to park his custom Rudge outside his Ice Cream Parlour in the ’50s, we can only imagine the crowds that would have flocked from afar to see Alonze’s latest incredible creation sitting with it side by side.