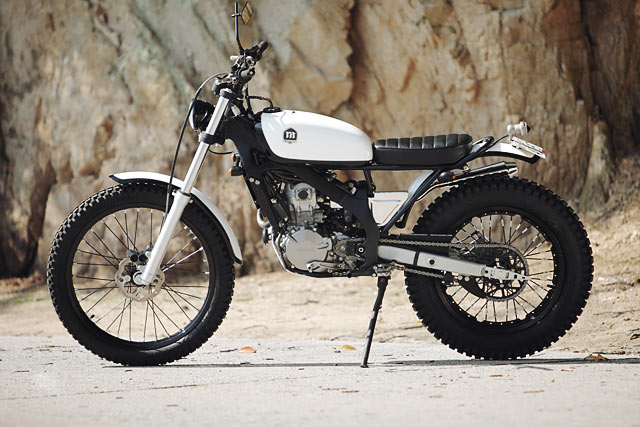 Richard Branson once said, “I have enjoyed life a lot more by saying ’yes’ than by saying ‘no’.” It is a pretty simplistic approach to surviving this mortal coil, but it sure is an interesting way of looking at things. Sadly, ‘no’ was exactly what Heiwa’s Kengo Kimura said when a customer first suggested a scrambler build based on a brand new Honda-Powered Montesa 4RIDE. Like us, Kengo saw it as a rather esoteric bike that he liked, but one he’d never really considered as a custom base. Luckily, after repeated requests from the customer, Kengo finally came around and said ‘yes’. And boy, are we glad he did. “We have customized old motorcycles for a very long time,” begins Kimura-san. “But recently, more and more people want to ride new bikes that have been customised to look like a classic.” Of course, rewind 20 years and Japanese shops were doing the exact same thing with SR Yamahas. Circle of life, and all that… “So we began making such a bike. I guess owners are looking for engines that are no trouble and bikes that are more comfortable rides.” The new 2017 Montesa 4Ride was purchased by Kengo at his local Hiroshima dealership. Clearly it’s not a bike that’s breaking global sales records, so an introduction may be in order. After the dirt boom of the 60s and 70s, the trials and offroad-focused Montesa from Spain fell into the doldrums sometime in the early 80s. Enter Honda, who ended up buying the company outright a few years later. By 1994, a range of brand new Honda-powered models were introduced. Introduced in 2016, the very trials-looking Montesa 4Ride is the latest bike from that lineage. The power plant is a 250cc four-stroke, four valve Honda single. Needless to say, we now want one quite badly.

After many years of featuring Kengo’s bikes, we’ve come to learn that he’s a man of few words. And the whole lost in translation thing never helps, either. So with bated breath, we asked him about his inspiration. “My inspiration for this motorcycle? I wanted to make it into a vintage scrambler with a ‘flip up’ seat rail.” OK, then… [superquote]“So I refused the job at the very beginning. But the owner kept asking me…”[/superquote]

“The owner said that he wanted me to make a scrambler based on a Montesa, which is very rare in Japan,” continues Kengo. We’re here to tell you that it’s not exactly common outside of Japan, either. “At first, I thought it would be too expensive for the customer. And because it was a new bike and not an old one, I thought it would be too hard technically. So I refused the job at the very beginning. But the owner kept asking me, saying that he wanted to make a truly unique custom bike that had never been seen before, and after a while I decided to accept the challenge,” he says, smiling. After stripping off the factory plastics, Kengo’s first port of call was to figure out his beloved seat rail. An entirely new item was fabbed up using steel pipe chosen to match the bike’s other delicate frame elements. Then came a tank cover designed to allow the original tank to stay in place while also adding the necessary visual weight to the build.

After making up a nifty little mount for the new Bates-style headlight, Kimura-san followed through with a bespoke exhaust, two new fenders and a whole bunch of painting and powder coating in a curiously minimal yet effective black and white colour scheme.

“Assembling the rear wheel was the biggest challenge,” he recalls. “It was a real pain to get it all properly balanced.” But the end result, after dressing it in a chunky Dunlop D803GP trials tire, was clearly worth all the faffing about. And that’s before we consider the drool-inducing Spanish Morad rims finished in a sleek satin black. Nice. When prompted, Kengo was quick to nominate the new tank as his favourite part of the scrambler’s build. “For the fuel injection, there is a pump in the tank which makes replacing it very difficult. But because the normal tank is so small, I was able to make a cover to go over the original item.” In conjunction with the new seat, it manages to move the Montesa’s look away from its trials origins while still retaining a beautifully lightweight, minimal appearance. And with a sum total weight of around 80 kilos (175 pounds), that appearance is more than just skin deep. So I guess that’s a ‘yes’ from us, too.