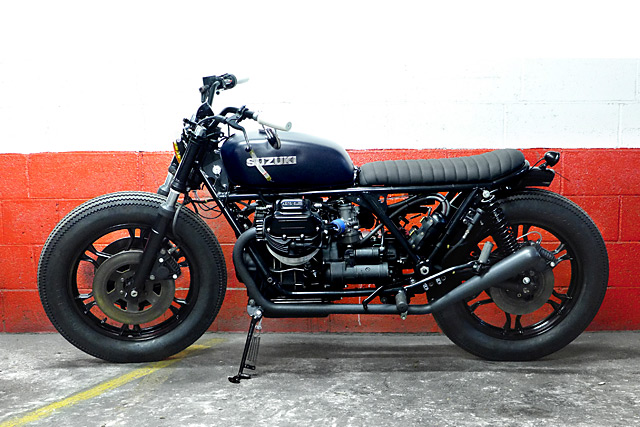 When Fred and Hugo from Blitz Motorcycles in Paris fielded a call from Jacques in Luxembourg asking them to breathe life into an old Moto Guzzi 1000SP they jumped at the chance to work on a marque they’d not before laid their hands on. But when the machine in question finally arrived they started to have second thoughts, rust had left the foot rests, master cylinder and other assorted pieces literally hanging on by a thread of steel. But with their love of creating industrial-styled flat trackers, a copy of Moto Guzzi’s service manual in their hands and the bike named in honour of a beautiful Italian visitor named Monica they started to craft the Guzzi in their own style, and it’s more than just a set of Firestones. The metal cancer ridden Guzzi was stripped down to its barebones and the boys hoisted it onto the operating table for extensive surgery. The frame has been modified to accept the new gas tank, surely a first, with the fitting of a Suzuki GT 175 tank, dents and all, to the big Italian chassis. The back-end of the frame also came in for significant modification with a rear hoop added to support the new bespoke black tracker seat. Before these items were finally bolted on the frame and side stand were powder coated in a dark gloss blue. Blitz fabricated the short rear fender in-house and it along with the handlebars, fork legs and wheels are finished in black powder coat that will resist any chipping the street stones of Europe can throw at it. The thumping 1000 Guzzi V-Twin is an engine like no other, it is unapologetic in being mechanical and will vibrate even at its low 900rpm idle, but it’s this very characteristic that makes it so addictive. This is an engine that leaves the rider totally in control with a level of feedback lost now to modern electronics and ‘refinement’; It has monstrous torque, it’ll rev to 8k and close the throttle and it engine brakes like a GP bike. But the version brought to the Blitz boys was dead, so a full rebuild including new pistons, rings and gaskets was undertaken finishing the heads and covers in black. The carbs are new PHB 36 Dell’Orto units breathing through custom aluminium filters and the twin stainless exhausts retain the industrial look in matte grey ceramic coating. Moto Guzzi didn’t exactly spend big on electrics using pre-war technology so the charging system has been replaced and spark is now vastly improved with an upgrade to CDI ignition.

If there is a theme to the Blitz builds it is that they like their tracker bars a little higher than most, enabling the rider to wrestle their beast from a riding position more like a Motocrosser. The Guzzi is no different and the stark white grips are a unique contrast to the dark palette of the remainder of the build. A vintage look, yellow lensed, headlight gives a totally different feel to the soft touring style of the factory item. The small bates taillight lets other motorists know just when the rider has grabbed a handful of brake courtesy of the new master cylinder and the brakes have been upgraded with new calipers front and rear. The vintage industrial theme continues with the engine breather attached to the frame with a leather strap from L’Anguille and fuel levels monitored by a sight tube.

Of course some modern technology is used to bring the Guzzi into the 21st century with the only instrumentation needed coming in the form of the multifunction Motogadget speedo. While ensuring Jacques is never stranded is a new Lithium-Ion battery mounted in a hand fabricated box under the seat. This mix of old and new proved the perfect combination straight out of the box with the initial test ride by Jacques a 300km ride from Blitz Motorcycles to a meeting with his daughter in Brussels. And what better way to cover the diverse roads of Europe than on a Blitz tracker that is just as comfortable touring as it is ripping up old cobbled back streets. It’s deliberately unrefined in its refinement, it makes the most of the great Guzzi engine and another old wrecker has been given a new life thanks to a few months at Blitz motorcycles rehabilitation centre.