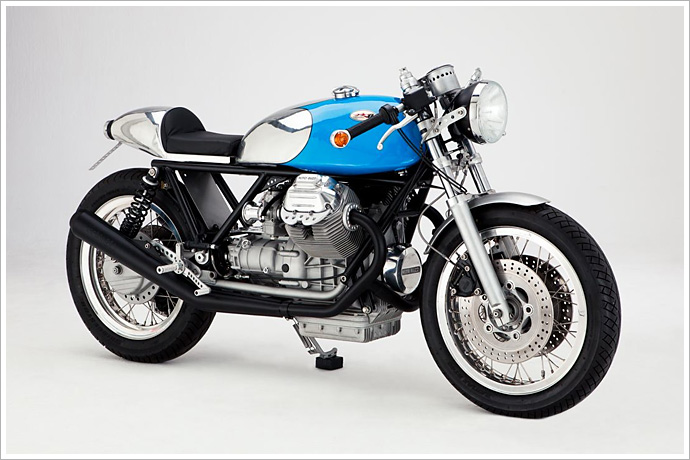 An alchemist, in case you didn’t already know, is defined as a person who possesses (amongst other things) the capability of turning base metals into the noble metals. Put simply, that’s turning iron, nickle, led, or zinc into gold and silver – called noble metals because they seem to have an almost magical ability to resist ever looking old and dated. Now fast forward 1000 years and consider the modern-day work of Hamburg’s Axel Budde. Given a rather scrappy collection of basic parts, some of which had well and truly been turned into near scrap before they reached his lab, he has managed to materialise the very precious bike you see before you here. Magic? Science? A product of the dark arts? Sadly for those of us looking to emulate his creation, it turns out that it’s nothing more than sheer determination, skill, and hard work. Damn. “I built the bike for Thomas Gruner, who had bought a ’89 Moto Guzzi Le Mans 4 in pieces a couple of years ago and didn’t really know what he had bought and how to put it back together again. He asked me to build a custom cafe racer from his bits and pieces.” “I was struggling a lot with the totally crappy inside of his engine and some parts, it was obvious that he bought a disassembled bike which has had an accident including some engine damage. He immediately fell in love with the tank lying around in my workshop (though not really ideal for the high neck of the late Le Mans frame,) which became his only definite wish for the bike. Except for the tank, I built all alloy parts on the bike by hand, as usual. The engine and transmission got a total revision and now have brand new stock Le Mans 1000 specs (950cc, 81hp).” “Even with the original power, the Guzzi is performing great after the 183kg “diet” (the stock LM 1000 is around 240kg) only the frame loses 3,5kg of steel. The modified fork is off a California with special stainless steel discs. Brakes are equipped with modern calipers and a momentum support on the rear. Exhaust is Lafranconi, shocks are Ikon, the rev counter is from MMB. The minimal wiring harness is built by myself.”

“so I wanted it classic and elegant,
but a bit hot rod too”

“I think Thomas is not the guy who’d fit a totally classic motorcycle (in his case, that’s meant as a compliment). I chose the seat shape and the type of paint because of the impression I had of him- so I wanted it classic and elegant, but a bit of hot rod too – away from the iconic Italian racer.” Those impressed enough with Axel’s skills may wish to investigate further at his website, the very Germanically-named www.kaffee-maschine.net. And let me be the first to point out that yes, it DOES sound like a place that sells espresso machines. And very cool motorbikes, apparently…