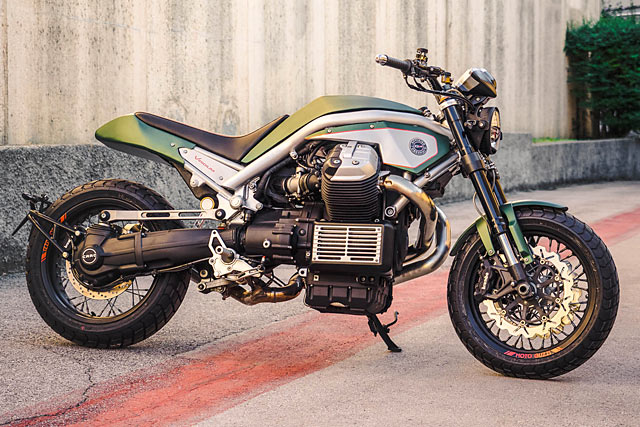 Nostalgia can be a powerful thing and our desire to hold onto the past, even the very recent, can have us railing against any possible change. The last of the Moto Guzzi Griso models are still yet to be sold from dealer floors before the bike is phased out entirely, but one man is already missing them. It should surprise nobody that it’s Moto Guzzi Maestro himself Filippo Barbacane of Italy’s Officine Rossopuro and he’s on a mission to send head office a message they’ve made a big mistake! He calls it Viridium, Latin for evergreen and its the factory special Griso 8v he wants to prove Guzzi should still be producing. 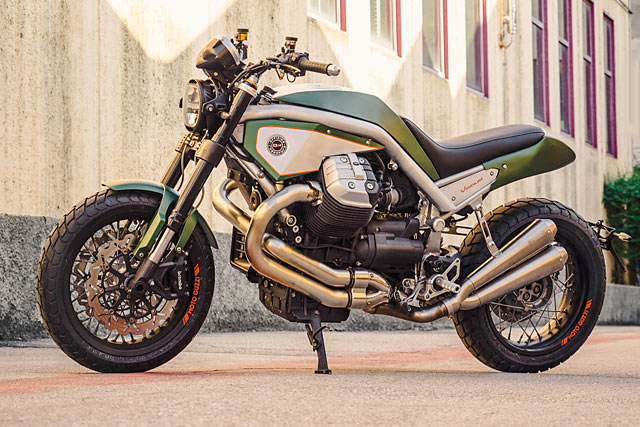 “It was a very successful project, but unfortunately Guzzi’s mother did not renew it after more than 10 years, something quite inexplicable, since it could have evolved more and more, improving and improving it over time,” pleads Filippo. But the Piaggio Group which owns the brand sees the troubles posed of getting the 1200cc engine through restrictive Euro 4/5 compliance a hurdle not worth taking and has folded their hand.

But try telling that to Filippo and you’ll get a response that is pure passion and anything but the corporate speak coming from head office, “Because I think that Griso is an “evergreen” bike. In fact, a bike that perhaps did not deserve to finish her life but that could still be renewed, refreshed and brought to a new life.” So when a client from Milan came calling he had the perfect opportunity to make his argument in 3D form. Not a total transformation but a build that would show the Guzzi faithful why the bare bones of the Griso 8v are just so good! 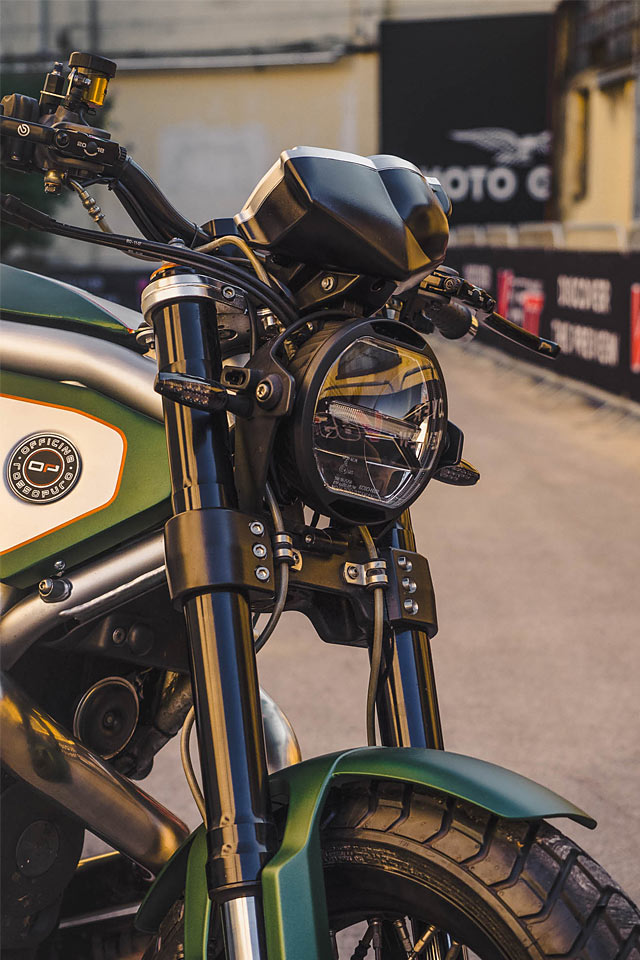 With that in mind Filippo was determined not to cut the frame and instead craft the body work around the original chassis in a way that might be done on a homologated special. But his desire to lighten a bike and his incredible aluminium working skills meant things would be left far from standard. The all new alloy tank and side covers give the Guzzi a radically different look despite the restrictive nature of the factory frame with large tubes running down each side. The angular side covers tuck hard into the gaps allowing the big engine’s heads to be put on full display. 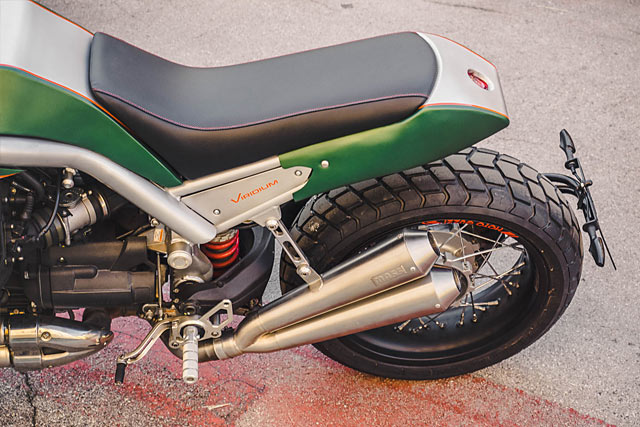 [superquote]“The colour scheme was an easy choice with the traditional racing green of the company broken up by raw aluminium and red accents.”[/superquote]

The rear end allows for more freedom with the plastic fender removed, the new alloy tailpiece hugs the subframe for a sleek finish that further enhances the visual lightness of the bodywork, while centring the thunderous v-twin lump. The colour scheme was an easy choice with the traditional racing green of the company broken up by raw aluminium and red accents that extended onto the custom trimmed seat. While all the lighting that is integrated is 100% road legal in the spirit of forging a machine the company themselves could produce and even extends to the fabrication of a rear number plate mount. 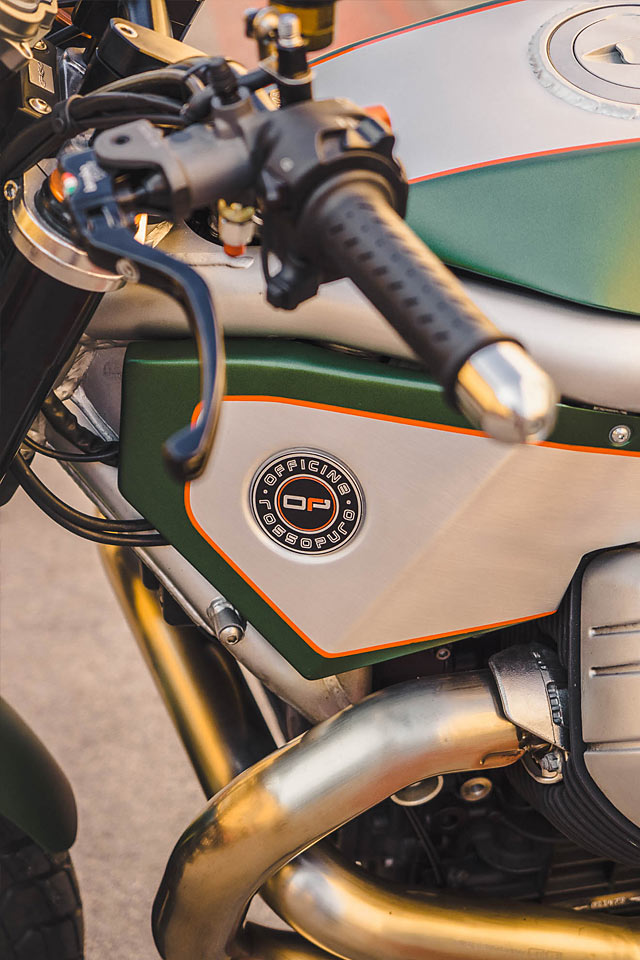 Nothing is as quintessentially Moto Guzzi as the drive-train and in the last incarnation of the Griso you get one of the very best. It’s got enough capacity at 1151cc to deliver that creamy smooth power you expect and with 8v heads she’ll rev hard to give an extra kick. With a massive 108nm of torque on tap, gas flow is essential to ensure its an even spread and Filippo works closely with Mass Moto to get it absolutely right. This time he’s finished out one of their exhausts with a pair of under/over twin mufflers for a little scrambler touch. 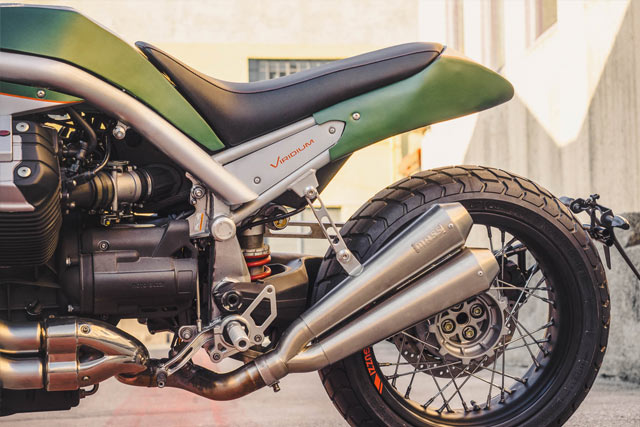 Following on that theme the tubeless spoked version of the wheels available for the Griso were chosen to give a balance between “classic/sporty and all-terrain”. The rubber keeps the look on point with a selection from the Pirelli catalogue in the form of the all-purpose MT60s. But if the tyres needed a change, the factory got the suspension package spot on; its part of what attracts Filippo to the Griso in the first place. Up front 43mm USD forks get the job done and a fully adjustable shock gives brilliant handling.

The braking is no less impressive with the lower fork legs allowing for radially mounted Brembo calipers to be fitted. The look is toughened up with the rotors replaced for a pair of wave pattern items in a floating configuration that give great feel at the lever. Flicking through the gears that send power down the shaft drive and applying the rear brake also comes in for a switch up. A beautiful set of rearsets give the factory hot rod feel of the homologation special that Filippo is after, just enough without being too much. 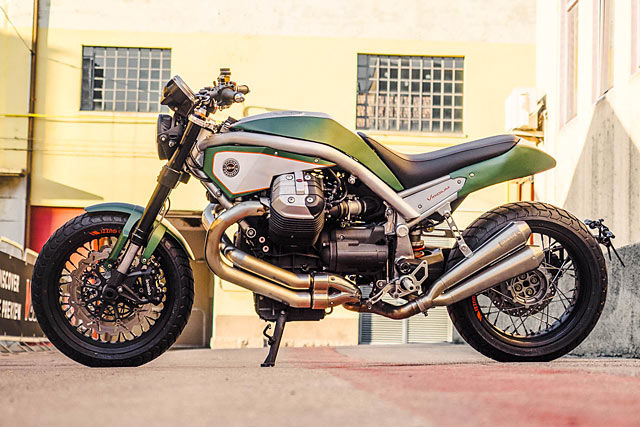 With the build wrapped up there was the perfect opportunity to show it off “I presented this bike at the last Guzzi world meeting in Mandello del Lario at the beginning of September with more than 30,000 people. In fact, even the photos I made in the factory, something unique that rare that had never been allowed until now. I noticed how many people did not understand that it was a Griso and some thought it was a new Griso,” smiles Filippo. It was the ultimate way to prove his point and while Moto Guzzi may not bring back the model, with Officine Rossopuro making the old ones look this good, maybe that’s not so bad after all!