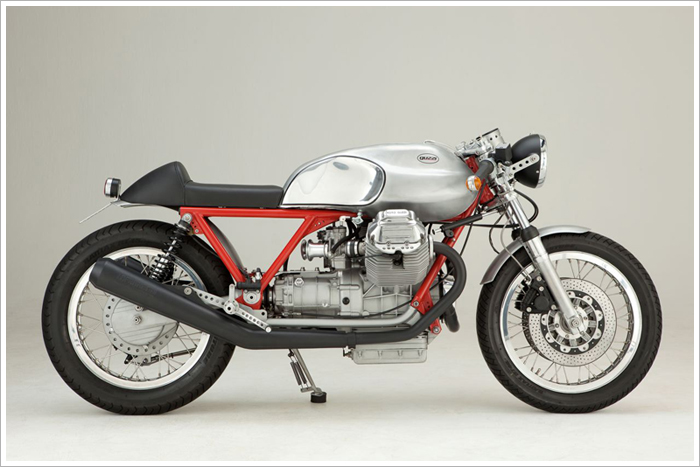 Imagine you are a really fast cyclist. So fast that you won a silver medal in the 2008 Olympics. One day you realize your feet can’t peddle any faster but you still want more speed. Lots more. So you do what every self respecting speed junkie does and you purchase a motorcycle. You decide on a Buell xb12s which you love but unfortunately ends up getting stolen. So you go looking on the interweb for a new motorcycle. And then you see it. A bike that stops you in your tracks and you just know the search is over. This is what happened to Swedish Olympian cyclist Gustav Larsson. After seeing a few pics on a website of a stunning Guzzi cafe racer built by German perfectionist Axel Budde, he knew he had found the guy to build his new bike. “I saw Axels race bike and I decided I wanted something similar!” says Gustav. “I had some different ideas from the beginning. But it turned more and more into a 60’s style cafe racer.” After a few conversations with Axel from the Guzzi specialist shop Kaffeemaschine (Coffee Machine – isn’t German cool?), he knew what the basic brief was. “Red frame, raw alloy tank, black Lafranconi’s – although it started with golden cast wheels” says Axel. So he got to work… The donor bike was a Le Mans 3 – a bike Axel has been using for over 14 years. The engine was modified with 950ccm cylinders, balanced crank drive, performance cam, electronic double ignition and a lighter clutch. It already had a rare, straight geared racing transmission, which was updated. The classic wheels are Morad with stainless spokes.

Shocks are Ikon, the fork has new tubes and Fac dampers. A minimal electrical system including a motogadget instrument was built. All special components on the bike have been handcrafted. The dry weight is 180kg and the horsepower is 82hp – which is more than enough to break away from the pack.

Axel spent over 300 hours meticulously building this handsome Guzzi cafe racer. The crazy thing is that Gustav still hasn’t seen the bike in person because he has been busy getting married and he is still away on his honeymoon. “I have still not seen the bike! As soon as I can I will bring her home. But from the pictures I could not be happier!” he says. There’s nothing like just getting married and all you can think about is another girl.