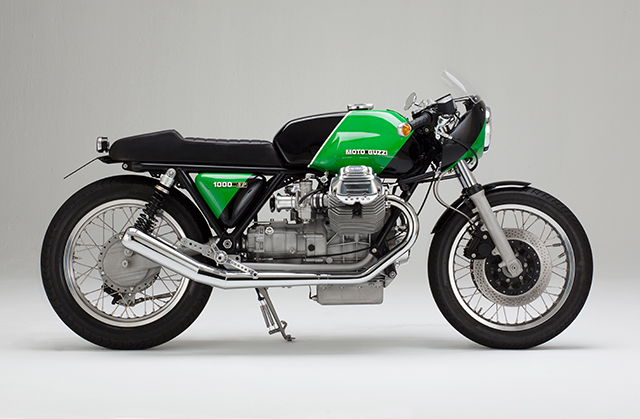 Kaffeemaschine (pronounced, erm… ‘Kaffeemaschine’) is a Hamburg-based shop that specialises in some of the most beautiful, understated Moto Guzzi builds we’ve seen. All their bikes are lean, stripped back and gorgeous but none more so than their latest build, ‘15’. As pretty as it looks on the outside, the real beauty of Kaffeemaschine 15 is within, much like a jam doughnut or a submarine full of supermodels – cradled in that SP1000 frame is a worked Le Mans MkIII powerplant. It’s stunning, immaculately finished, quick and reliable. What’s not to like? Head of the workshop, Axel, slated reliability as the first goal of his fifteenth build, aiming to keep the bike as a daily rider. But when trying for reliability they also gave the engine a little more oomph. First to get worked over were the cylinders, with the 850cc units ditched in favour of 1000cc bores. The heads were ported and new valves and springs were mounted under a Schrick cam, while the bottom end had the crank balanced, clutch and flywheel lightened and a new oil tank from a late-model Moto Guzzi Bellagio. The new arrangement fires into life with a new electronic ignition and Valeo starter, with all the wiring redone and neatly hidden away – the space in between the sidecovers is now empty and holds a leather bag that Axel can use to store gloves, registration papers or letters from adoring fans. The rest of the work that has gone into Kaffeemaschine is easier to spot. The seat is hand shaped and made by Axel himself, and sits atop a shortened and de-tabbed SP1000 frame that has been worked over so nicely it’s hard to spot its original sport touring roots. The tank is a restored and re-sealed LM 1 unit that helps take some of the angles away from the inherently 80’s appearance of the original MKIII gas tank. The exhaust and various stainless and alloy fittings were also made in-house, including the screen and mudguards. As well as the frame, the wheels have also been lightened. The housing of the rear drive and wheel hubs and flanges have been drilled and trimmed and it wears light alloy rims mated to stainless steel spokes, with the sensible combination of Bridgestone BT45 tyres and stainless steel brake lines helping the Guzzi stop.

All in all Axel is ecstatic with the way the new bike rides, especially considering the original Guzzi, which is no lightweight, now tips the scales at only 189 kilograms. The result, he says, is fantastic. ‘It really handles like a 600cc sports bike, especially due to the weight reduction and a modified, shortened Yamaha R6 forks and adjustable Wilbers shocks.’ Axel had finally built a café that he would be able to keep for himself and ride every day. But sadly, the bike wasn’t going to stay in his garage for long. ‘Charles visited me in my workshop last winter to get an idea of my work and he saw the half-finished bike’ Axel says. And nearly twelve months passed before he heard from the customer again. ‘He called me a couple of weeks ago, to find out if it was finished and if I was willing to sell. Which I was. Kind of…’ As happy as he must be to get the bike out the door and to start work on a new project, the sale of #15 threw a spanner in the works. ‘It was just before I had planned to take it down to Italy and the Alps over the holiday to really make it mine!’ I’d say he should be kicking himself, but knowing the history of fine work Axel and the team at Kaffeemaschine do, their next ride will be even better.