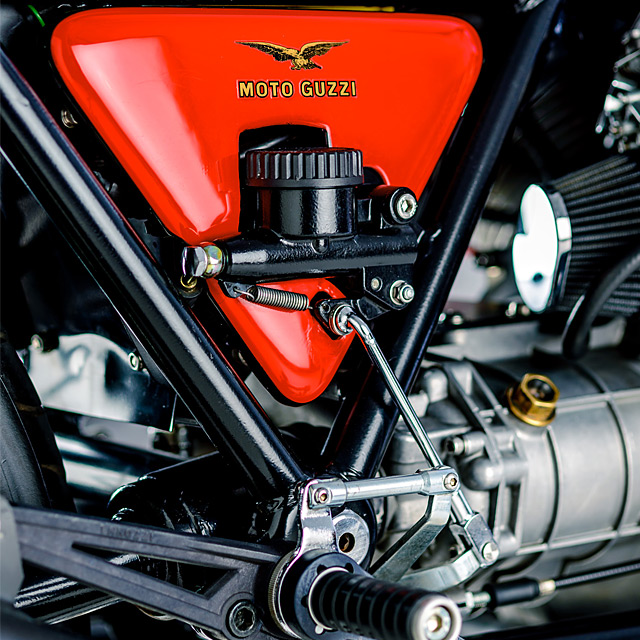 While every brand has its share of fanatics, it’s the Italian marques that seem to inspire the most passion. Some people fawn over their race-bred Ducatis, some battle mercurial Laverdas while the remainder squirrel away in their sheds, tinkering at old Moto Guzzis. While not strictly a Guzzi fanatic, Johannesburg-based professional photographer Kevin Rudham will no doubt have Italian fans nodding in appreciation at his re-born 1980 Moto Guzzi Le Mans Mk II. Impressively, he completed nearly all the work himself. ‘It took two years,’ Kevin says, ‘and I outsourced only the powder coating and electroplating, but the rest I did myself, including the paint job with a borrowed compressor and a cheap Chinese touch up gun.’ Kevin has been riding motorcycles since the age of 16, but stopped riding shortly after buying the Mark II 20 years ago while deep in the throes of a midlife crisis. The bike sat unloved in his garage for years, until in 2012 work began in earnest to restore it to its former glory. And the Le Mans special was truly glorious in its day. Named after the 24 hour motorcycle race of the same name, the Le Mans (or ‘Le-mon’, as it was rudely dubbed) was the flagship bike for Moto Guzzi in the 1970’s, with the 85 horsepower v-twin featuring a typically Guzzi mix of solid handling and guttural power delivery. It found quite a following among The Faithful as a fast, albeit heavy motorcycle with a reliable powerplant. Kevin’s Mark II was completely stripped down for the rebuild, with its engine receiving much of the attention. While getting it apart was straightforward enough, putting it back together was a different task entirely. Kevin says ‘I’m fairly handy with a spanner but after the strip down I found myself wondering how it was that, as a professional photographer, I hadn’t taken detailed pictures before taking it all apart to make it easier to get back together.’ But with the aid of a factory parts list (that included some exploded diagrams) and the always-helpful Guzzi fans that lurk online, everything came together nicely, with a few hidden gems inside. A factory big bore kit was fitted, sucking from 40mm Dellorto pumper carburettors, while a rebuilt and re-shimmed close ratio gearbox and deep spline clutch kit should make the shifting a far less clunky affair than when the bike was new. The whole assembly barks through stainless steel ceramic-coated Brian Wilson pipes with a twist of the Tomaselli throttle. Kevin mounted Koni shocks to the rear and progressive springs and factory air-assisted dampers to the front, while Tarozzi rear sets and period-correct handlebars sourced from a scrapyard help keep the bike under control around bends. The electrics, bane of many Italian bike owners, were also refreshed, with a new regulator/rectifier and Dyna miniature coils ensuring reliable spark and feed to the LED headlight and instruments. The bodywork was altered too, with a custom front fender, sidecovers and a retrofitted Mark I fairing mounted, and in a particularly African twist, a black-dyed Gemsbok hide acts as the seat cover. Since the Mark II’s rebirth Kevin hasn’t exactly babied the bike, keen to test out exactly how fast his engine work would carry him. ‘I’ve only had the guts to take it to 190km/h (119mph) since the rebuild. The bike was willing to go faster but I wasn’t.’ That’s nothing to be scoffed at, especially considering the Guzzi has to breathe the thin Johannesburg air at 1,750 meters. And as he punches through the gearbox around town Kevin has to have an extra-wide grin on his face, knowing that his tweaked classic bike is all his own creation.