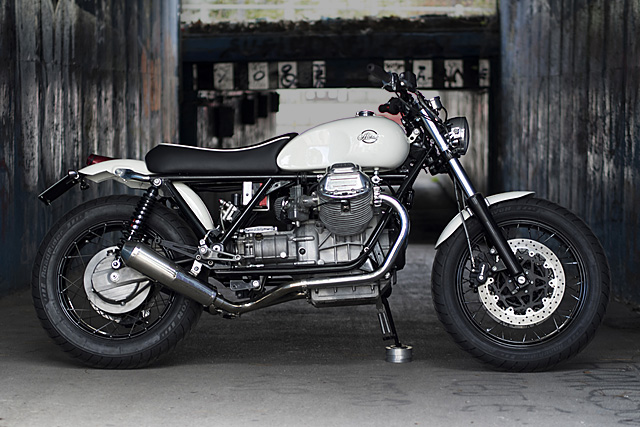 Growing up in the 1980’s with a classic bike rider for a neighbour, I was thumbing through his old brochures that I first set eyes on a Moto Guzzi. I was captivated. When it comes to the old Italian marque and their unique engines and designs, you either get it or you don’t. And one man who gets the Guzzi like no other is builder Filippo Barbacane from Officine Rossopuro in Abruzzo on the exquisite Adriatic coastline of Italy. From his workshop he has built a range of Guzzi’s in every style imaginable and just like this SP1000 they’re all picture perfect and built to standards so high, they’ll take your breath away. For this build Filippo got back to his bread and butter; he can build a futuristic street fighter or a modern superbike with the best of them, but his classically styled Guzzi’s seem to flow from his soul. “The idea was that of a motorcycle in classic taste and classic look but with modern solutions” and with the bike known as Alipes (‘Quick’ in Latin) it had to be a classic that could keep pace with many a modern chariot! Thankfully the 949cc Guzzi V-twin is capable of producing thunderous torque and with some clever modifications plenty more. The engine was completely overhauled and refreshed in-house with Filippo’s years of experience extracting extra grunt and features parts made and sold by Officine Rossopuro “The head guard and the engine support are our accessories for old series Tonti-framed Guzzis.” The exhaust is of Filippo’s own design with the welding handed over to Mass Moto who produced the stunning twin pipes and rear cans. Italian designs are known around the world for their beauty but the tragic scenes, the pandemic, the nightmare that was the fashion of the straight line, crazy colour, Disco era did not spare even the maestros of the Mediterranean. But Filippo was having none of it, so the square edged tank, slap together side covers and box tail rear of the original have been discarded with Officine Rossopuro originals taking their place. The tank features beautiful flowing curves once featured on Guzzi’s like the California and the hand-made fenders hearken back to a time of simpler lines. The seat, another one-off, is sculpted at each end to accept the arc of the body work and is finished in sumptuous leather. While the paint work is all class, generous amounts of creamy white are only broken up by the singular maroon line and subtle Alipes logos on the tank. Good builders make good decisions and when it comes to the suspension of Alipes the choice of components by Filippo is perfect. There isn’t an old bike, even only 10 years old, that can’t be improved with more modern suspension, such are the rapid advancements. But to retain a classic look those choices have to be wise and the new Marzocchi 45 mm front forks that have been modified to fit the Guzzi serve both form and function brilliantly. Out back is the smooth reliability of the shaft drive but that extra weight requires quality dampening and an upgrade to Bitubo adjustable shocks allows the precise settings to be dialled in. A custom set of rearsets let the rider feel in full control and the shortened subframe allows the new rear shocks to take pride of place. With increased shock length the rear point of the swingarm is effectively lowered proportionally to the rider’s weight creating more stable mid corner performance and giving the rider confidence to push that little harder. A lower centre of gravity and increased stability is further enhanced by reducing the unsprung weight and adding some extra rubber and that’s exactly what Filippo has done. The first step was to modify the swingarm to allow the fitment of a wider tyre over the wafer thin 110 section rear from the factory. For lower unsprung weight the wheels are now spoked items, but these modern marvels have the spoke exiting the sides allowing for new high performance rubber that is tubeless to be fitted up. Improving the rear contact patch is a 140 section Avon Roadrider out the back with the front getting a matching hoop in the standard width. With the Guzzi now handling like it’s on rails, improved brake performance becomes even more important as you arrive at the next corner carrying extra speed. Taken from an MV Agusta Serie Oro, the front brakes don’t get much better than the twin 320 mm Brembo units that have been made to fit and the 230mm rear that is supported by a custom aluminium bracket. Clip-on bars have their place, but with that freight train of an engine beneath your legs a set of slightly pulled back flat bars just makes perfect sense. You can sit up and cruise the highways in comfort and style, while still having the ability to muscle the Guzzi through some twisty turns. Filippo has topped them off with new grips and modern universal switchblocks for a clean look with all the function you could need. A quick action throttle gets the engine wound up and braided brake lines run from the new master cylinder that provides power to the new braking setup. The lighting is all new, but classic in style giving this Guzzi an early ’70s appeal with just the headlight showing a hint of modernity. The battery now rests in a custom cradle while all the wiring normally covered by the factory sidecovers is neatly hidden under the tank. It’s Filippo’s ability to add all this superior modern technology while enhancing a bikes vintage stylings that makes him such a brilliant builder. Much of which is down to his obsession with creating a classic look without it looking tired “every part of the motorcycle is new, the level of finish should be the maximum, without compromise.” We couldn’t agree more.