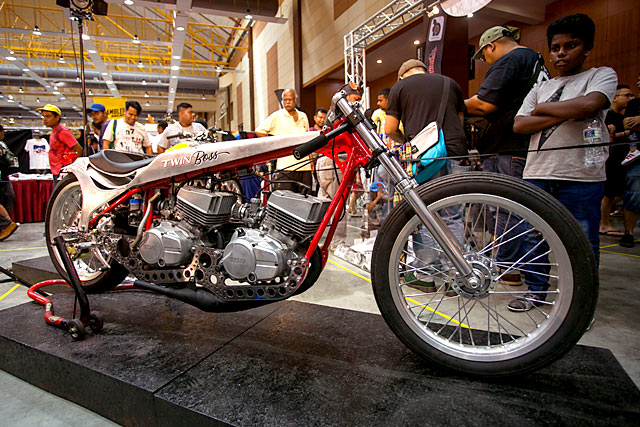 We were lucky enough to be able to attend Malaysia’s 6th annual Art of Speed show in Kuala Lumpur last month. Rumour suggested that it was up their with the best Asian shows. After a long weekend full of local custom culture, food, beer, bona fide moto celebs and even a decent ride into the Malaysian countryside, we were just about ready to open a new Kuala Lumpur office.

Unfresh from an 8 hour flight from Sydney, the obligatory Nissan Elgrande whisked us from the airport to a centrally located bar for a pre-show meet and greet. “It’s called The Heli Lounge Bar”, we were told. Turns out the bar we expected to be chopper-themed was a real, 34th floor helicopter pad. And one with an excess of booze and a disconcerting lack of safety barriers. Tequila shots, you say? What could possibly go wrong!

But the vertigo was quickly alleviated with a round of introductions that included Chopper Dave, Jeff Holt from Hot Bike mag, Kai from Cherry’s Company, Shige from Mooneyes, Dino from SpeedHunters, Cole Foster from Salinas Boys and Art of Speed organiser Asep.

Heavy lidded and more than a little dusty, we emerged the following day to take in the show itself. Held in multiple indoors spaces of aircraft-fitting proportions, our first thought was how strange it seemed to be shutting ourselves indoors when we could be drinking beer in the tropical sun. Of course once that sun really kicked in, the air-con and lack of equatorial humidity made us eat our words. With a fairly even split between bikes and cars, the hot rods and JDM stancers proved a welcome distraction once we’d taken our fill of the two-wheeled attractions.

And as with most Asian shows we’ve had the pleasure to attend, the lack of pretence and stylistic cliques was great. Cafe racers and baggers. Choppers and scooters. Mopeds and samurai diggers. All playing happy families. And that’s not even touching on the skaters, tattooers, geeks, rockers, hipsters, dads and club members in attendance. The presence of a Mercedes G63 AMG 6×6 also heralded the unseen presence of the Malaysia Royal Family. How’s that for an eclectic mix? [superquote]“You haven’t lived until you’ve been overtaken at speed while lane splitting by a Malay local in thongs and a plastic bag raincoat”.[/superquote]

Monday was spent carving up the hills north of the city through Selangor State Park and then stopping for lunch in the small and ridiculously provincial town of Hulu Yam. Noodle soup and chicken on rice was enjoyed amongst a sea of chopsticks, red plastic chairs, stray dogs and lazy ceiling fans. Then it was back onto the loaner 883 and a return to battle with KL’s very busy yet somehow very relaxed freeway traffic. You haven’t lived until you’ve been overtaken at speed while lane splitting by a Malay local in thongs and a plastic bag raincoat carrying groceries. Zero fear. From a show that started as a few bikes in a shopping centre 6 years ago, the whole event sure does impress. And the presence of so many international guests, both the famous ones and the plain old bike-obsessed fans who’d travelled from Indonesia, Thailand, Japan and Singapore was true testament to the show’s success and reputation. We can’t wait drop by again in 2018.

[ Art of Speed | Many thanks to Beautiful Machines ]