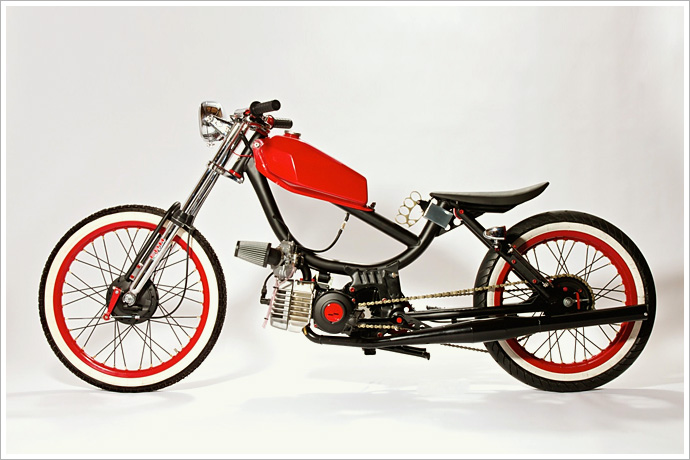 Another day and, hey presto, another killer ‘ped build. I’m not sure sure where they are all coming from, but our super computer calculations show that at this rate, every man, woman and child in the world will be tootling around town on a bitchin’ custom moped within the next 4.27 years. Scarily, the builds won’t stop there and look set to continue amassing until we reach a moped armageddon of sorts where it becomes us against them, man versus machine, in a nightmare-ish future that will see the bikes test mankind to it’s very limits by blocking out the sun with vast clouds of blue smoke, all while getting great gas mileage and being very convenient to boot. The leader of this future moped master-race will be none other than this exact bike; Motomatic’s “Yuba 2”. And deservedly so. I, for one, welcome our new low-powered overlords… and their creator, Nathan Kiehn. Here’s Nate. “I built the first version of the Yuba bike in 2006 for a friend. The concept of the bike was his, I just made it all work. The frame started out as a sears free spirit. On the first version I extended the original swing arm by 6″ and added the rigid struts. For the second one I made the whole rear end from scratch. Of all the bikes in my gallery, I get the most inquires about this one.” “The ‘Yuba Bike 2’ was a special order for a customer. He requested the white walls, the red rims, and the brass knuckles, the rest was up to me. I got ripped off on my first order to get the brass knuckles for this build they took my money and sent me nothing. Luckily I had a friend that had some but I had to restore them first since they were pretty scuffed up.” “I am a one man shop and I did everything on this bike myself. I did all of the metal work, the powder coating, laced and trued the wheels, polishing, upholstery, along with the engine and pipe work. People think I cut the head tube and added rake but I didn’t mess with that part of the frame. I increased the rake by lowering the rear end. On a normal Puch, the engine sits pretty much level you can see by the angle of the engine here how much lower this bike is.” “I think I put the most time into those wheels – they are made from the parts of 5 different bikes. The rims are new but the rest of the wheel is old parts that were restored. It’s not the most comfortable bike to ride, with the rigid rear end and the minimal seat, but it’s all about the look.”