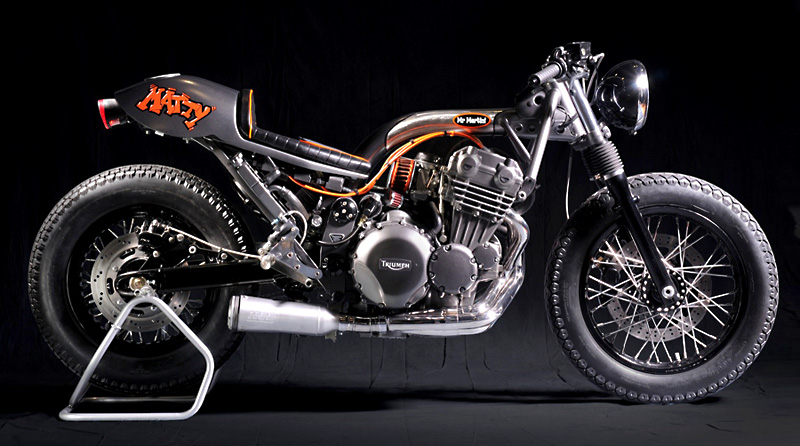 The Italians have made many masterpieces over the years and this Triumph Sprint 900 is another one. Named the Matty You-Stone, it was built by Nicola Martini who was the first Triumph dealer in the North East of Italy. Mr Martini tells us that this “project was developed around a hinge point: to show the wonderful 3-cylinders Triumph carburetors of the 90’s”. To acheive this, the bike was completely stripped down, including the fuel tank and replaced with a much smaller one (4.5 litres) coming from a Peugeot Scooter and placed under the tail. The chassis has been shortened in the rear and the bobber wheels and fat boy light are the only components that have been purchased. The rest of the components come directly from Nicola’s well-stocked warehouse of old spare parts – from the smallest radiator connector coming from a Speed Triple to the tail of a trophy Thruxton. This standout bike has earned Mr Martini the first prize of the 2009 Verona Fair Contest amongst many other contests around the world. The bike is called “Matty You-Stone” where Matty is the name of Nicola’s first son, Matteo, who designed the graffiti writing on the tail of this special bike. To see more of Mr Martini’s other bikes check out his inspiring collection.