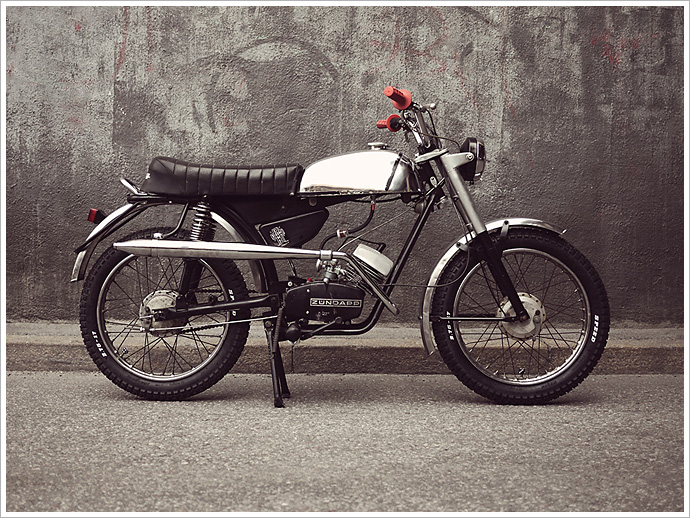 Modern life is rubbish. Or maybe it’s just us and our take on what we think matters in the 21st century. Whichever way you look at it, downtime in our lives has never been at more of a premium. We’re constantly online and never really out of reach. What’s the real casualty of this? For those of us that aren’t fortunate enough to work with bikes for a living, it’s our riding and building that suffers. And that’s because the finite amount of hours in the week means that the more we’re social media-ing and talking on our gadgets, the less we’re getting our hands dirty. The answer? Find more hours in the day. That’s exactly what Håkan Boqvist did. He realised that the lunchtime he spent staring into his Facebooks at work could be better utilised staring into oily metal componentry. And instead of building ‘likes’ or ‘friends’, he built this. “The 50cc Cobra 2000 is one of just a handful of models that came out of the Mustang Bicycle and Moped Factory in Trelleborg, Sweden,” says Håkan. “As with all Mustangs it had an engine from Zündapp and it was a trustworthy bike when it came out in 1977.

During my own childhood mopeds were never a huge interest since I used to take my skateboard everywhere I went. I guess some of the interest I gained when getting older comes from my father who’s been riding bikes since I can remember. Seeing old pictures of trips in Europe on a red candy CB750 kind of inspired me and got me all started. Most days I’m on my SR500 but I figured I wanted something even lighter for commuting.” “I found this Mustang about 4 hours north of Stockholm, it was in a really beat up condition and it had a 70cc with a 20mm Mikuni setup. It never ran very well because someone did a really poor job on the engine, so I figured I wanted to do the opposite of what people normally do with an Zündapp engine and get it back to stock with a 50cc cylinder and a Bing carburetor. The original Cobra came with scrambler pipes so that was a given.” “My garage is just a few minutes away from my office so I tend to sneak out during my lunch hour to get some grease on my hands. This moped is the result of basically all my lunch breaks during 3-4 months. It’s been kind of a hassle to get stuff done during the daily 30-45 minutes but that’s pretty much the time I have as a father of two daughters.” “When I first tore the bike apart I found an old wasps nest in the tool compartment so that kind of gave the project a name; The Cobra Wasp. But since I got the engine back to the original 50cc it ain’t quick enough to earn that name so it’s now known as The Lunch Build. Impressed? Want more? Fear not. About a year and a half ago, Håkan started A Bourbon Affair. It’s a place he uses to keep track of inspirations and his own builds, and also a label under which he can be creative. For more displays of this Swede’s obvious talents, we’d strongly suggest you have a click and take a look.