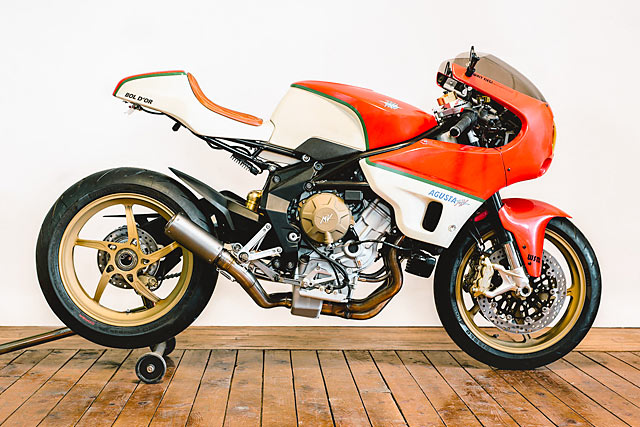 When it comes to winning at life, it’s hard not to think that New England’s Walt Siegl has got things all figured out. Hell, if life was an olympic sport, Walt would be covered with more gilt than Auric Goldfinger’s secretary. While you and I wake on Monday mornings with a grimace and a necessarily strong coffee, Walt leaps out of bed revelling in the fact that his day will be full of beautiful Italian motorcycles, a workshop that was once and old stone mill, and a town that appears to be taken straight from a postcard and that is surrounded by some of the best roads on America’s eastern coast. And the real kick in the family jewels? He’s got the skills to make customs like this racy Bol d‘Or MV Agusta Brutale. Before we got to the meaty parts of the chat, we started by talking to Walt about some current affairs. “We are in the process of completing our first two superbike projects. We’re calling them ‘WSM SBK’; they are based on liquid-cooled Ducati engines up to the Panigale engines. Interestingly, their frames are designed in such a way that they can also house the air-cooled engines that Ducati has built over the years.”

And then, on to the bike du jour. As with most of Walt’s beautiful builds, This 2014 MV Agusta Brutale 800, which he’s calling quite simply the Bol d’Or, is an 80s-style performance bike based on the increasingly popular endurance racer style. Of course, the Bold d‘Or race was around long before Boy George and shoulder pads, but it wasn’t until the 70s and 80s that the machines developed that ‘look’ that we’ve all come to know. It goes without saying that when it comes to race bikes, you’d be taking your life in your own hands to start with used machines. Inherit a bike from a wheelie addict with some cracked welds and you just might find yourself on a 150mph piece of origami. Putting safety first, Walt takes the ‘fresh is best’ approach to donors. “I purchase the MV donor bikes through the MV Agusta USA warranty department, or from dealers. They are all zero mile bikes.” [superquote]“Having raced endurance bikes for a while myself, I’ve developed a real soft spot for their design.”[/superquote]

Unlike most of us, Walt’s bike customising obsessions aren’t just a result of too many late nights in front of Google Images or distant memories of bedroom wall posters. In fact, it’s quite the opposite. “Having raced endurance bikes for a while myself, I’ve developed a real soft spot for their design.” Top of his list are those killer offset headlights, along with those impressively large tanks and classically simple farings. “The bike is based on an MV frame, engine and suspension components. We designed and built the rest of the bike, including the all-new bodywork and ram air system in Kevlar, the aluminum subframe and fairing stay, the new performance exhaust and the rear sets”. Walt also updated the ECU programming to make it a little more, ahem, sporty. “And If the bike is being ordered to race, we also offer special engine work. Through all these changes, we were able to reduce the weight of the bike from its factory mass of 408 lbs (185 kgs) to a much more healthy 334 lbs (151 kgs).”

Walt notes that his endurance conversions require him to walk a fine line between authentic Bol d‘Or looks while also making sure to not throw the ‘sexy Italian motorcycle’ baby out with the bathwater. “Also,” notes Walt, “To develop all the necessary bodywork for a brand new model is quite an undertaking.” Indeed. Even some well-known factories out there would have trouble getting bodywork looking this good. Giving us the distinct impression that he’s tested his MV creations to the nth degree, Walt grins broadly as he notes that these WSM modified MVs are almost telepathic in their race-speed handling. “It’s absolutely effortless,” he exclaims. “Add that to the performance and character of the three cylinder engine and…” Understandably, he trails off as he considers a suitable adjective to describe the indescribable. Maybe the word ‘perfection’ will suffice? We sure think so.