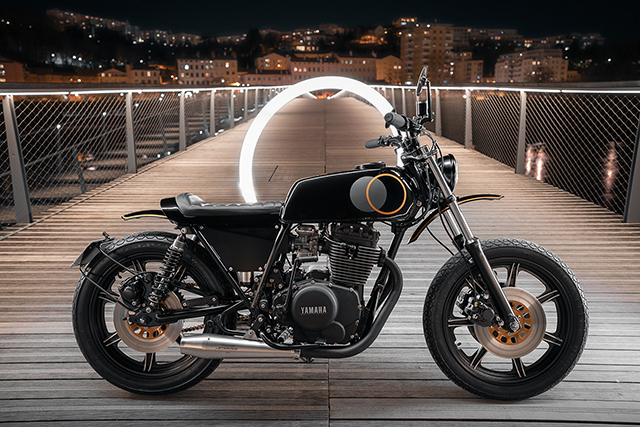 Known as the one with the ‘wrongful impulse to hoard, to accumulate beyond what one can use and to refuse to share with others’, no he is not the bloke on your street stockpiling mountains of toilet paper, but the great dragon of The Hobbit, Smaug. This was the creature that came to mind when Charles and Enzo from Panache Customs stood back to admire their latest build. A French workshop renowned for their incredible attention to detail and brilliant build quality. They’ve once again taken on the challenge of building a Yamaha XS360 custom and delivered a fire breathing result that’s nearly impossible to slay! 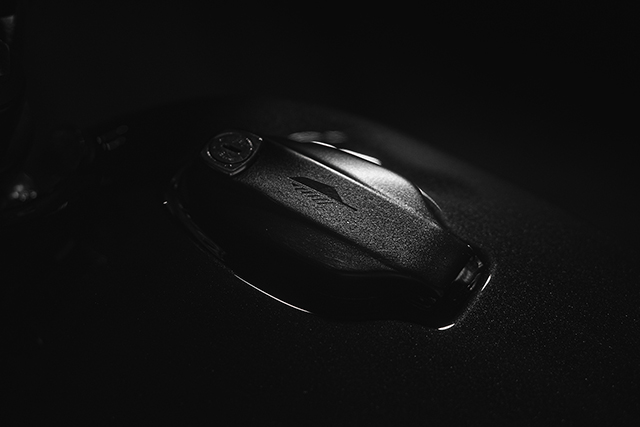 But there is one thing the mythical beast and the man-made machine definitely do not share in common. While millions have read the work of Tolkien, the twin-cylinder Yamaha remains a largely unknown and forgotten gem. While their key rival Honda was filling showrooms with four strokes, over at Yamaha it wasn’t until the mid to late ’70s that they realised the two stoke smoke was definitely going to be a thing of the past. So while the CB360 is nearly identical in every way and had the advantage of being a known commodity, the XS360 is nearly impossible to fault with a few added improvements. 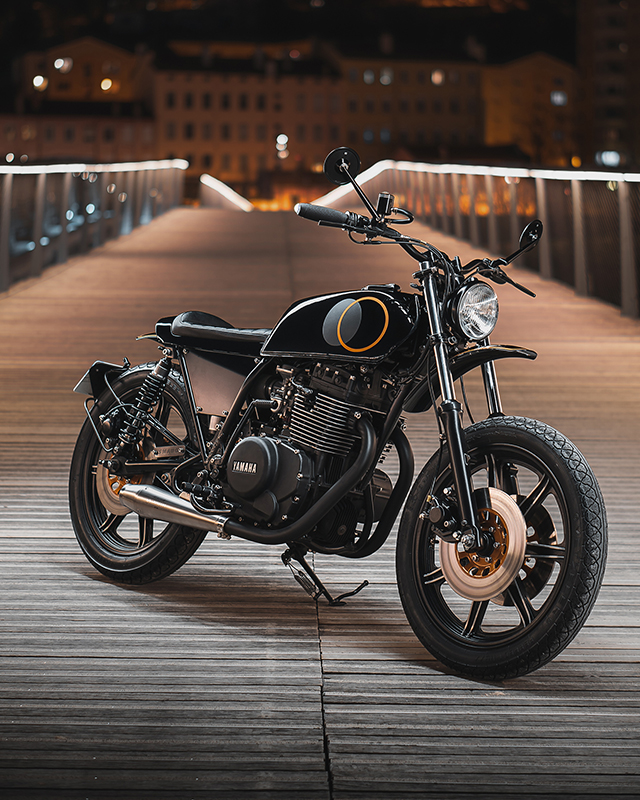 The rarity of the model is one of the reasons the client chose the bike in the first place. “We found this XS360 in the surroundings of Stuttgart, Germany. Faithful to the reputation according to which Germans pay particular attention to the maintenance of their machines, this bike had around 40,000 km, ran perfectly, was in excellent condition, and passed its technical control without any faults,” Charles told us. So rather than having to chase problems and fixes, the boys could get straight down to business and stripped the bike of its angular robes. 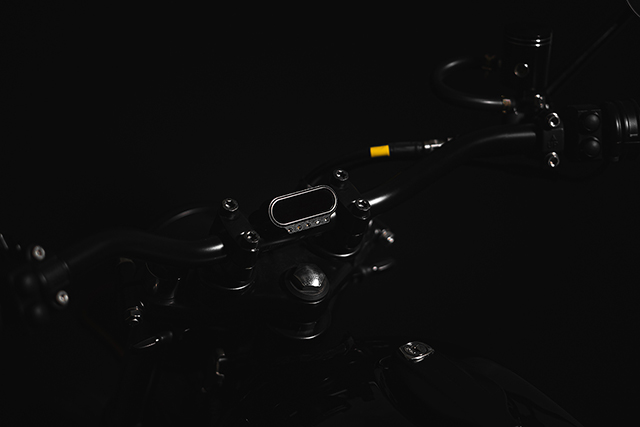 Although a very tidy example, perfection is all that will pass at Panache and the frame was sanded back superbly smooth, welds cleaned up and a new rear added before it was ready for powder coat. The swingarm was given the same, with the subtle addition of a nameplate on the right side before it too was covered in powder. With the bulky seat not returning it was decided that the matching side covers would also exit stage right and a neat set of replacements have been bent up. 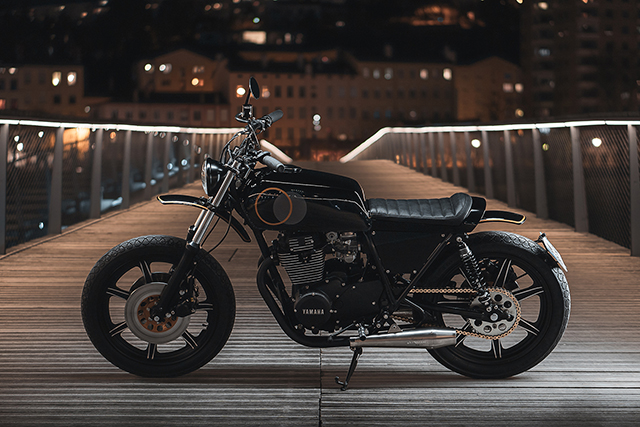 Replacing the seat, the tail unit is an interesting piece unlike any we’ve seen before; while the base and sides follow the frame it’s the rear that captures the attention. Rather than the hump completing the design, it is sectioned, and plated off, before exposing the traditional rolled rear fender for a truly unique touch. The front fender is also remodeled, with the hand-formed piece now mounted at the bottom of the triple clamps. Completing the bodywork the stock tank has been restored to perfection and allows some of that distinctive XS styling to shine through. 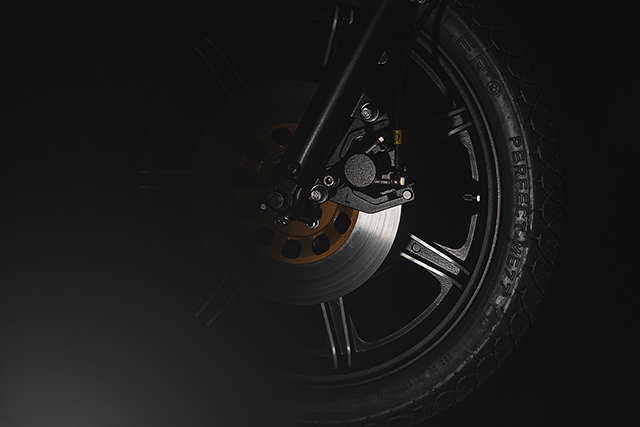 But at Panache it’s all about balance and they don’t build a bike just to look good, so despite the good handling from the factory, the Yammie gets a modern makeover. Upfront the forks have been pulled, refurbished and built back up using YSS progressive fork springs. At the back the twin shock setup is replaced with a pair of units from Hagon with adjustability neatly integrated for a clean look. However, it’s the braking that gets the biggest change, with the boys converting the bike to a twin-disc setup for superior performance in a factory-like finish. 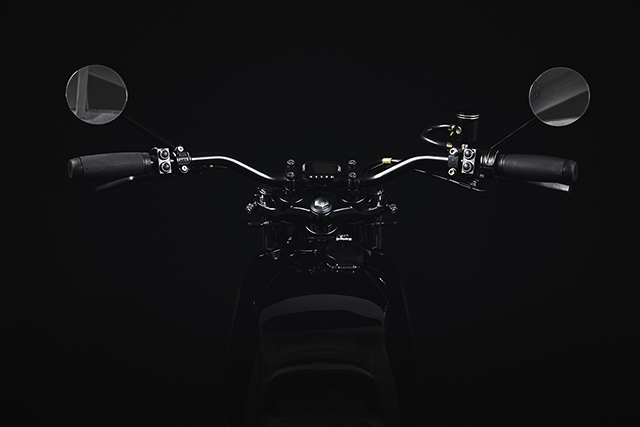 The engine was always a strong performer and Yamaha built in some extra reliability on the electronics front to take on Honda, but this too has been brought into the 21st century with an all-new loom, Motogadget m-unit and Elektronik Sachse MHP regulator/rectifier for the lithium battery. The replacement Mikuni carbs add a little pep and breathe through Uni filters, while the stunning exhaust is a combination of ceramic coated headers and stunning Sparks mufflers. 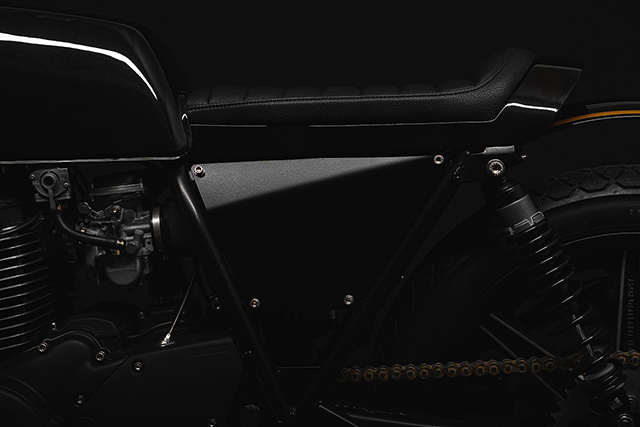 That distinctive engine also forms part of the visual show with the finish absolutely perfect and the rest of the bike is no different with a flawless combination of paint and powder applied across the bike. A range of quality Motogadget parts mean nothing on the bike is anything but first class and the custom license plate holder with integrated light is yet another example of Charles and Enzo’s immense talent for an ultra-clean finish. So where do they draw this desire for absolute perfection no matter the project? “Our inspiration comes from the Rolex manufacture and its legendary reputation,” Charles explains. And is it any wonder then that their finished product would leave even little Bilbo Baggins looking cool on this brilliant example of an XS360 perfectly done. 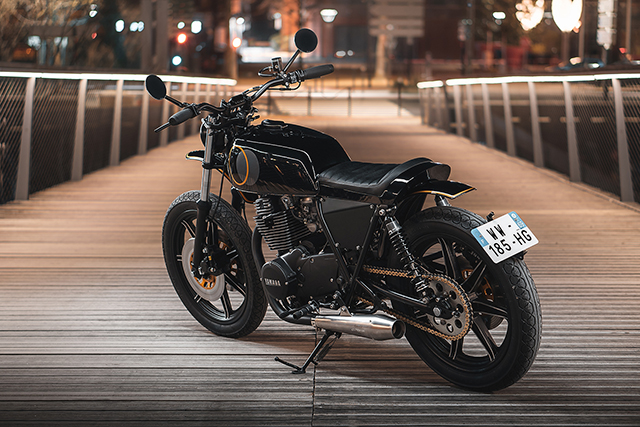