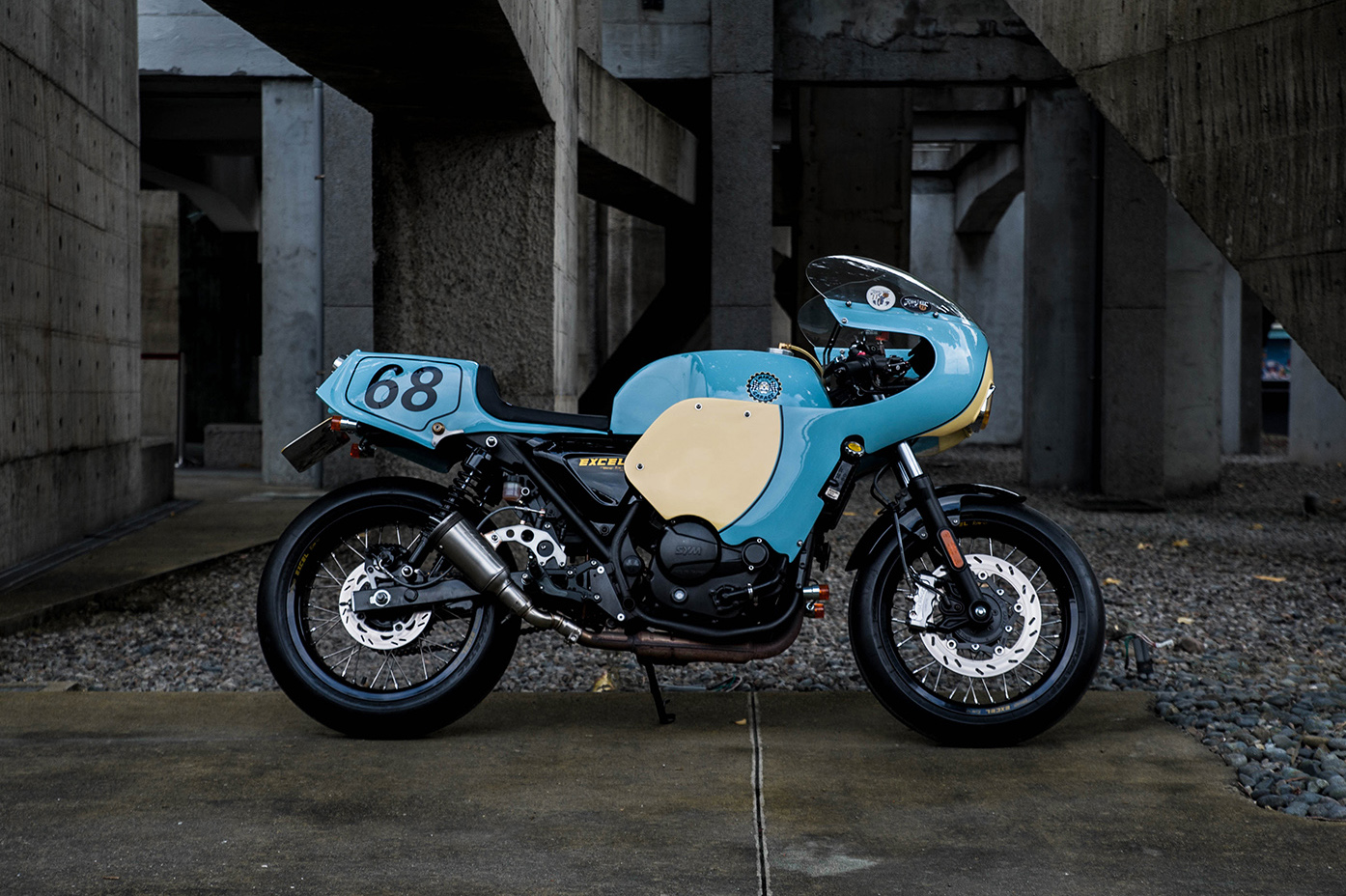 Despite a well-established global presence, Sanyang Motors — or “SYM” as it’s better known by — isn’t a company that’s given much thought or attention in the Western motorcycle world. This, however, isn’t the case in SYM’s native country of Taiwan, where the marque stands as one of the most important, and almost certainly the most historically significant motorcycle manufacturer in the East Asian nation’s history.

First established in 1947 under the banner of Ching Feng Hang, the company operated for several years before pivoting to open the Sanyang Electric Machinery Plant in 1954. In 1961, the firm became Sanyang Industrial Co. Ltd, just one year prior to the company entering a strategic partnership with Honda to assemble Big Red’s bikes on SYM’s home soil, kicking off a fruitful relationship that would last until 2002.

A dozen-or-so-years-after SYM and Honda initially inked their deal, Sanyang released the Wolf 125, an eighth-liter UJM-style standard based on Honda’s CB125 that would go on to become one of the best-selling and most iconic Taiwanese motorcycle models of all time. And as a custom motorcycle shop headquartered out of Taiwan, Mike’s Garage possesses a soft spot for SYM’s bikes, especially the legendary little Wolf 125.

“Working on a motorcycle that was designed and manufactured on your home turf just adds another level of sentimentality to the build and undoubtedly makes the project more personal,” explains Mike. “In 2014 SYM introduced the SB300 — aka ‘Wolf 300’ or ‘CR300i’ depending on the market— in celebration of the company’s 60th anniversary and, in addition to being the (country of Taiwan’s) first domestic 300cc classic, the bike carried a lot of personal significance for me which is why I selected it to be the basis for my own personal build, (rather than a customer-commissioned work).”

What’s more, the donor selected for the project would be a 2015 model year specimen, the same year that Mike’s Garage first opened its doors. Even though a client hadn’t commissioned the build, Mike still had a limited window of time to complete the project, hoping to enter the finished bike into FreeBiker Magazine’s RIDE FREE 11 Show in late November of 2020. As per usual, Mike had a thoroughly-calculated vision for the finished build, though as things progressed, new ideas began jumping out at him, and before long, the project had pretty majorly deviated from Mike’s original sketches.

‘I personally love the whole cafe racer style, but with so many of these on the road I really wanted to do something different and more aggressive, so I played around with the idea of adding a big fairing and a retro-sportbike tail section and all of the sudden we were well on our way to building an endurance racer,” relays Mike.

With an updated, but now clear vision for the SYM, Mike got to work stripping the 278cc single of its neo-retro cafe bodywork. Rather than crafting all-new bodywork from scratch, Mike instead opted to order new reinforced fiberglass pieces from Japan, though getting them to fit on the bike would require an extensive amount of modifications. After slightly narrowing out the build’s fairing — a full unit similar to the bodywork seen on Dick Mann’s CB750 racer — Mike opened up some space in the front to accommodate a headlight before hacking away at the bottom, cutting out sections to fit the SYM’s protruding engine and its radiator.

Taking inspiration from 1970s endurance and GP-style units, the build’s boxy monoposto tail section is another off-the-shelf item, and though it jived wonderfully with the new fairing, it resulted in a much lower seat height, ultimately throwing the tank’s lines and proportions completely out of whack. Never one to shy away from a challenge, Mike decided to retain the stock tank (cover), cut it in half, shorten its height, and shave off around one-third of the knee-dent areas. The end result is a somewhat subtle change, though makes for a markedly more cohesive design as a whole.

“The most difficult part of the build was designing a detachable suite of bodywork that didn’t require cutting or modifying any of the chassis or structure work and still utilized all the donor’s original stock mounting points. This was an enormous headache to get all straightened out, but it’s honestly probably the easiest and most simple way to follow the totally shit vehicle inspection regulations here in Taiwan. Just undo a few screws, swap out the bodywork, and it’s back to a stock SB300 and ready for inspection,” Mike tells us.

Giving the endurance-flavored SYM a more aggressive stance to complement its new, racier bodywork is a front-end that’s been shortened by 2cm (0.787”) while out in back, Mike’s fabbed up and installed an extension piece that stretches the stock swing-arm by 5cm (1.968”) and affords a slightly longer wheelbase. From there the longer swing-arm has been paired with a set of upgraded aftermarket retro-style rear shocks. Upgraded stopping power also now comes from a top-shelf set of Beringer brakes mated to Brembo RCS master cylinders via steel-braided lines.

The stocker’s cast aluminum wheels were also clashing with Mike’s retro racer theme, so they too were jettisoned to open up space for a new set of custom hoops. Rocking 17” units front and aft, the SYM now sports blacked-out Excel rims laced to hubs that Mike modified in-house, with the front hub borrowed off of a Suzuki TU250 while the rear item was plucked from a Hartford VR200. Both wheels were then shod in ultra-sticky Metzeler Racetec Supermoto tires for maximum grip whether ripping around the streets of Taipei or doing laps down at the local race track.

The SYM’s attack-ready stance has also been helped along with the addition of new rider controls and a revised cockpit. The SB300’s original single-piece handlebars have been replaced with a pair of WRRP clip-ons with new grips, a folding Brembo brake lever, and tiny 1” bar-end mirrors on either side. WRRP would also be responsible for supplying the project’s adjustable black-anodized CNC-machined rear-sets. The SB’s stock dual-clock speedo and tach units have been pushed back from their original location atop the top triple to just behind the new fairing’s clear windscreen. A one-off bracket also now supports the top of the fairing while a custom-machined gas-cap adds a bit more visual flair to the equation.

The unsightly oversized stock exhaust on the SYM had been destined for the bin since day one, and with the lion’s share of the heavy lifting now complete, Mike turned his attention to crafting the bike’s new can. Suspended from a bespoke, geometric-looking hanger, the build now ejects spent fumes from a custom header feeding into a 4” Supertrapp 443 muffler with a grated XR’s Only Power Tip end cap. Other details rounding out the build include a bespoke leather seat complete with Mike’s Garage labels, a vintage-inspired circular Biltwell LED taillight set in a custom metal veneer housing, a retro square yellow headlight, and a set of low-mounted old-school yellow indicators hanging off the lower sections at the front of the fairing.

“With the exception of the paint and some of the fiberglass, 100% of the work on the bike was completed by myself, entirely in-house,” Mike proudly relays.

The final stretch of the build would be laying down its one-off livery. Wanting to highlight the lines and shapes of the bodywork without being overly distracting, Mike opted to go with a professionally-applied baby blue scheme with pastel yellow accent colors and black pinstriping to match the build’s blacked-out framework and wheels.

Along with skull and checkered flag-toting “Mike’s Garage Taipei” logos on the tank, the modified fiberglass bodywork on the build has also been adorned in #68 racing numbers — another very personal touch of Mike’s. “I had been part of the national in-line hockey team here since I was a kid, and when I played, I always wore the number 68 on my jersey, including when I competed in the Junior World Cup in 2002. So, the number instantly sprang to mind when it came time to design the bike’s livery, and seemed like a logical choice for the name of the build,” relays Mike.

Though there’s no shortage of elements to write home about, when asked what aspect of the bike Mike is most proud of, the Taipei builder explains, “It’s definitely the first retro endurance racer I’ve ever seen or heard of in Taiwan and having been able to so thoroughly transform the build’s bodywork and overall appearance without modifying any of the original structure was a monumental challenge but I’m so thrilled with how things turned out.”

Building custom motorcycles for clients obviously allows builders to pore pieces of themselves and their personal style and taste into projects, though there’s something incredibly refreshing about seeing an immensely capable bike builder create something purely for themselves. After all, that’s where custom bike building started, and though the lines can at times get blurred, that’s what crafting one-off bikes is, or at least should be all about.