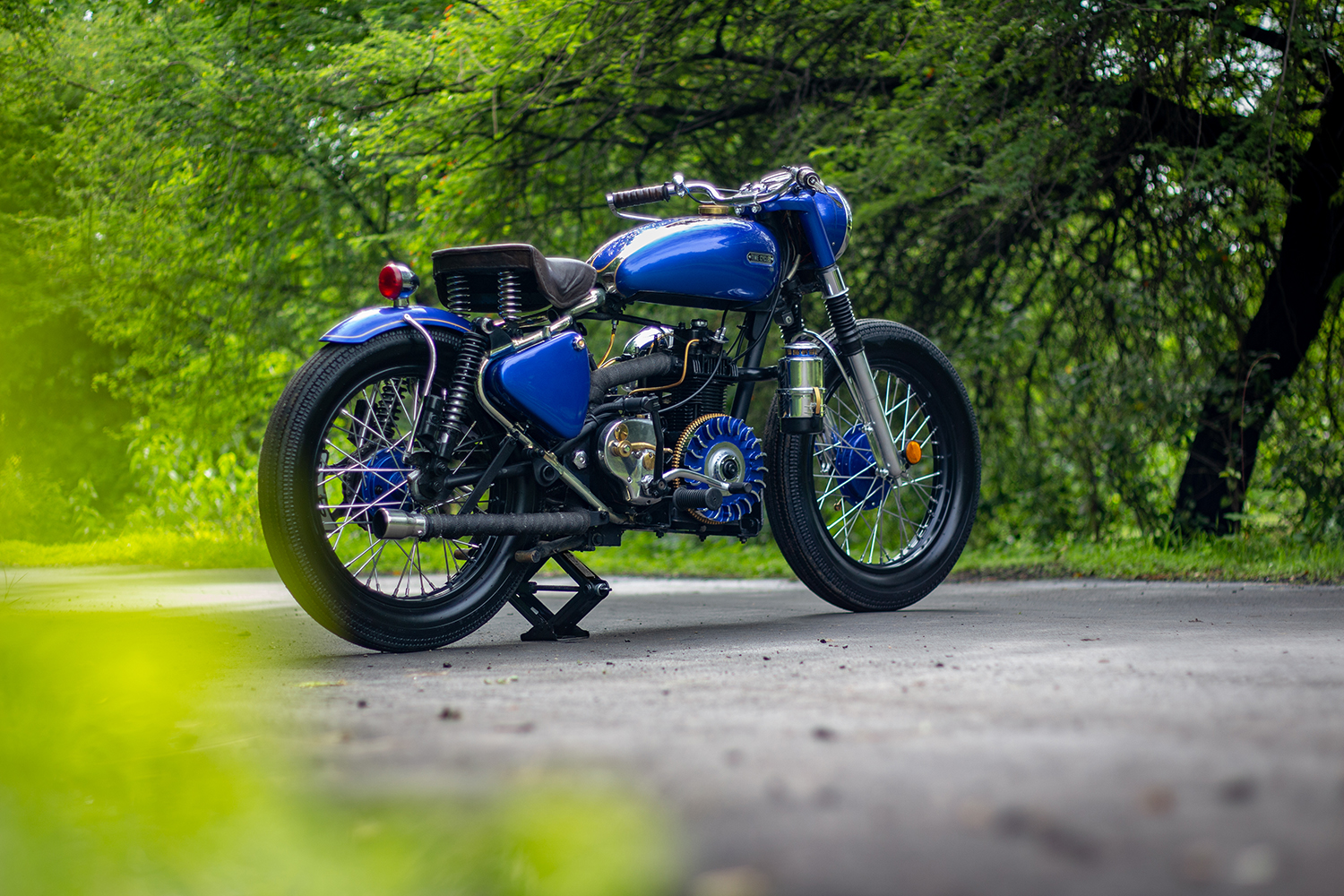 In India, the Royal Enfield is as sacred as the game of cricket and as revered as the holy cow. There’s no wonder the Bullet is the national motorbike. In the rural outskirts of Mhow, in a small town in Madhya Pradesh, is a custom motorcycle shop called Time Cycles. They know a thing or two about their national treasure, so when they picked up a 1959 Enfield Bullet 350 that was in need of some love, they were ready to restore this old beauty.

This wasn’t an ordinary Bullet though – it had been converted to a Greaves-Lombardini diesel engine by its previous owner. For fuel economy the diesel engine is a common engine swap in India, especially for agricultural machines. The downside to the great fuel economy is the power. “A meagre 6.3 HP is delivered at 3600 rpm; but it does make around 20 Nm of torque at 1600ish rpm,” says Shashank from Time Cycles. “If you ride it wisely, it sips about 1.3 litres of diesel per 100 kilometres. Not the ideal choice of motorcycle if you were in a hurry, though.”

The other downside to the diesel engine swap is the lack of reliability; the Bullet seems to instinctively know what engine it should be running. “Looking at the motorcycle, it was clear it needed of a lot of work. A complete nut-and-bolt restoration was on the cards. After having assessed the condition of the donor, we tried for it to be a bobber while maintaining Enfield essence, but with modern touches, think of it as an Enfield Diesel re-imagined by us. Resto-modded bobber, is that a thing?”

To squeeze every bit of horsepower out of the bike as possible, the guys started by removing all the weight they could – the airbox, battery box, mudguards and chain guard were all thrown in the spare parts bin. The next job was getting the stance right. “Shock absorbers were replaced by OEM gas-charged shocks, and we used shorter springs with altered compression rates. We lowered the front as well by around two inches and altered the damping to make it more compliant. Stock 3.25-19″ were replaced with Shinko’s 4.00-19″; the new tyres are taller and considerably wider. We were contemplating whether we should go for 18″ or maybe even 16″ in the rear but the ride feel with a 19″ in old English frame is something else!”

The team added a classic butterfly-style handlebar to get the ergonomics just right. They then moved on to installing a vintage custom-made brown leather springer saddle. “This was hand-stitched to perfection by artisans who have been doing this for generations. It indeed is bloody comfortable: ideal for long solo trips!”

They then wrapped the grips in leather grip wraps from the Trip Machine Company, which were polished to match the same colour as the seat. “We fancied the idea of a minimal handle bar so we added custom-made bar end levers in brass and finished them up in chrome, helping us de-clutter the handle bar. Lastly, we carefully hand fabricated the mudguard and the stays to fit flawlessly.”

With the bike being over 50 years old, the electricals needed to be brought into the 21st century. The original 6V system was upgraded to a 12V custom electrical system, capable of running 200W on demand. The old filament bulb in the headlight gave way to a new Philips H4 LED bulb and an additional 100W fog light, 3000K Philips H4 Rally bulb – for riding in bad weather.

In order to get a clean look, they decided against using OEM indicators that stuck out on the side. So instead, by keeping the iconic headlight casquette, they cleverly replaced the original pilot lamps with indicators in order to minimize the clutter. The rear indicators were discreetly mounted on the rear suspension using a combination of off-the-shelf parts and custom machined bits.

The horn is used a lot in India, so they decided to upgrade the ancient horn to the Hella trumpet. “With deliberate work, we hid the air compressor and other electronics in one of the tool boxes. The battery, ignition switch and fog light switch were neatly integrated into the other tool box. Dents from the fuel tank were removed and necessary bodywork was done. We then created a recess to fit our badge, flush with the contours of the fuel tank.”

The air-cooled Greaves-Lombardini diesel motor was given a complete engine rebuild. The pushrod engine was taken apart and the bearings and piston were replaced. They also upgraded the clutch to accommodate more plates and tended to the entire four-speed gearbox internals. A larger, custom made, 19T front sprocket was installed to aid the overall delivery. “We also decided to get rid of the engine cover and let the exposed spinning flywheel create some drama, just like the peacock dancing in the rains. Yes, the flywheel is very dangerous and may lead many to believe we have no regard for safety, but we believe it adds some thrill to the overall leisurely paced riding experience.”

The Bullet was then stripped down and the chassis was restored to its original specification. It was then sent to VP Designs Custom Paint Shop in Pune and given a liberal splash of custom hydrochrome blue paint. As another little detail in homage of the peacock, they reworked the speedometer and delicately placed an actual peacock feather on the dial. “We used the ampere meter casing, and a quartz movement was installed by one of the best precision watchmakers in the state. The clock dial was also given the peacock feather treatment to match

During one of the test rides, Time Cycles realised their motorcycle possessed the characteristics of a peacock. “It can make people’s jaws drop as it dances while being aloof all the time. The peacock is also our national bird and, being from an Indian armed forces background, all those childhood lessons in patriotism started to make sense. Let’s not forget that the Bullet is our national motorcycle. In addition, peacocks can ‘sort of’ fly and we have 6.3 HP at our disposal, remember?” So the bike took on the new name ‘Navilu’ – which, you guessed it, translates to ‘Peacock’.

The team at Time Cycles took an old turkey and turned it into a beautiful peacock. A motorcycle that isn’t just a combination of two of India’s national treasures, but also something that will be treasured for many more decades to come.