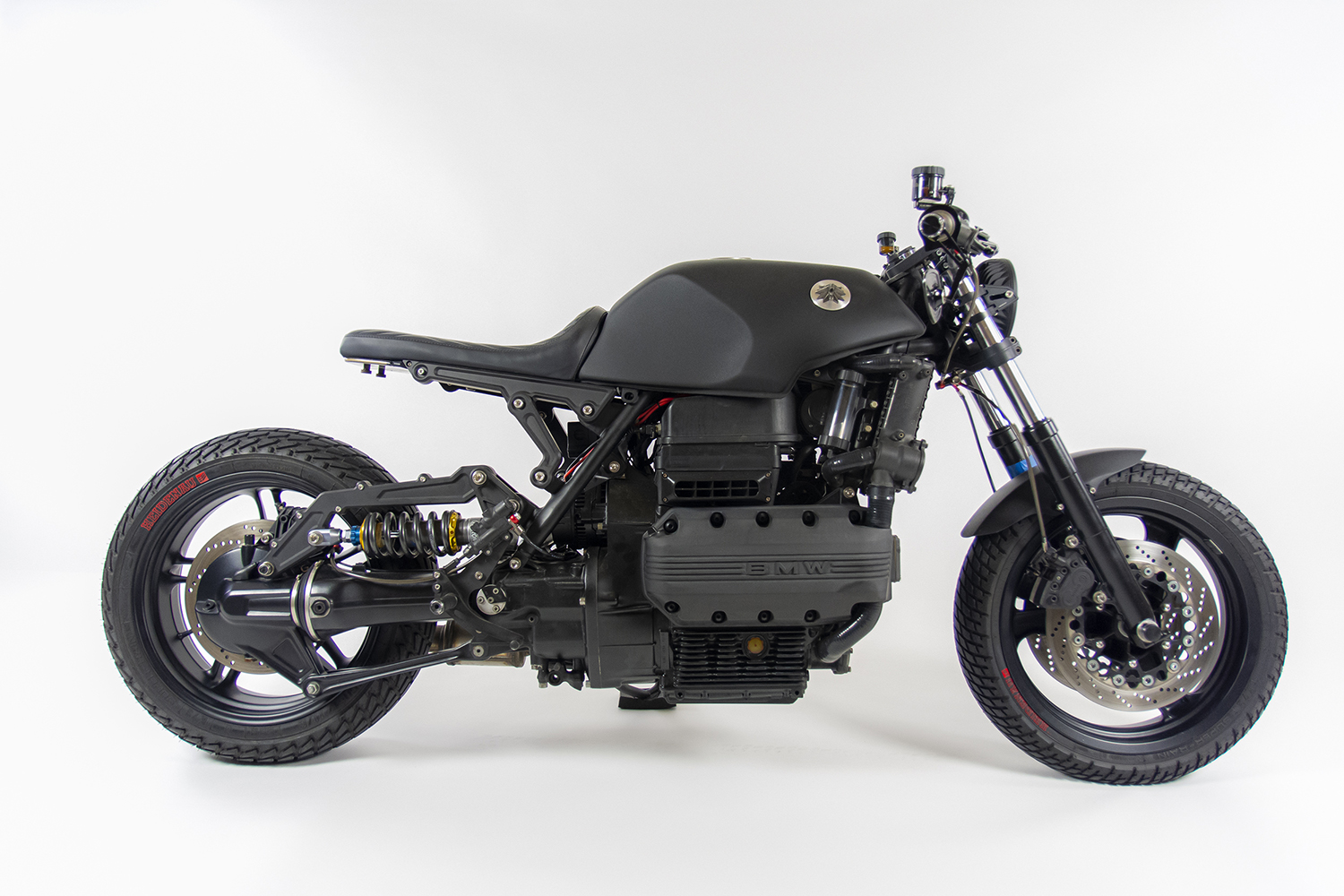 New York City might be the concrete jungle where dreams are made of, but the state of the same name is a diverse landscape, from the bustling high-rise laden streets of Manhattan to the stunning and lofty peaks of the endless uninhabited mountain ranges. So a bike built to traverse the full range of roads the place has to offer needs open road ability with a stance and style to fit into any of the five boroughs. Away from riding for over two decades and a big fan of the Bavarian brand, Marek Kruszynski knew exactly the bike he’d build to welcome in his return to two-wheels. But not willing to simply write a cheque, he built this beautifully black BMW K1100RS in a small back shed with a view to die for.

“I was watching the Racer TV on YouTube and there was an episode about Retrorides BMW K100 with horizontal suspension, I said to myself this is it! I bought the Cafe Racer Bible by Lourenco Brothers the same evening and started collecting information,” Marek explains. In no rush to finish the project, this would be a build where no corner was cut, while at the same time enjoying the process of bringing it all together. With space in NYC at a premium, the work was all done “in the cosy garage of a rural house in upstate New York, Catskills.”

The donor is a 1993 model K1100RS, bought still fully faired in red, comfort seat and back support still fitted and looking every inch its near thirty-year age. At nearly 600lbs, they’re a big girl and Marek began the process of getting her out of her clothes, inspecting every last nut and bolt, keeping what could be used again and throwing away the rest. Down to a bare frame it was first painted with 2K in black, but being the perfectionist that he is, Marek then had Damian from @thepowdertouch in Queens NY, lay down a hard-wearing layer of powder coat with the wheels being done too.

Next was to fit the stunning parts from Retro Rides for their horizontal suspension kit, but rather than measure twice and cut once. Marek measured over and over again before everything was micron perfect and the final cuts and welds could be done. The matching subframe gives the entire rear end a mechanical feel as if it’s all working together as one pure piece of engineering, with a big dollar Nitron shock controlling it all. To protect all of the aluminium parts on the bike, including that new rear end, it was all Cerakoted in armour black, common protection for firearms.

The coating went onto many of the custom parts too, including the rearsets and the triple trees. The upper of which was custom designed by Marek to hold a Motogadget motoscope pro dash and gear indicator. His drawings were sent off to Dixer Parts where Adam did an expert job at machining the final product. The front suspension is rebuilt to match the new rear and lowered slightly through the clamps, with a pair of clip-ons fitted beneath the upper. On the bars went a Brembo 19mm RCS Corsa Corta radial brake master cylinder and a Brembo 19mm RCA radial clutch master cylinder that works with a Frando 11NBL slave clutch cylinder to convert it from cable to hydraulic.

The Hot Rod styling starts at the front with a set of machined clamps holding a KOSO thunderbolt headlight. With the big tank smoothed out and given a flat black finish, Marek knew it needed something more, “I was looking for some unique emblems for the bike and one day some crazy idea came to my head, why not the Wolf logo from The Witcher, since I’m formally from Poland and I grow up on Andrzej Sapkowski fantasy Witcher books I thought that it will match nicely to the dark character of my workhorse.” With the beautifully stitched seat featuring the Wolf logo in red, a colour replicated on the lettering of the Hidenau K73 rubber.

The engine wasn’t to miss out either, with everything neatly pulled apart and the exterior pieces coated in paint matching heat temp product. The big 1100cc four-cylinder now flows more fuel with the injectors upgraded to multipoint EV14 units. The ultra neat four into one headers are heat wrapped to keep things cool and then bark out of a small car muffler for a distinctive rumble from the Bavarian brute! Then it was time to ensure the Bosch computer and all the electricals ran to perfection with an entire re-wire. It’s all based around a Motogadget m.unit and powered by a Shorai lithium battery in a custom box.

Then like many builders before him, Marek raided the Motogadget catalogue fitting up a Motogadget m.button and breakout box B, with m.blaze disc blinkers and m.view flight glassless mirrors going onto the ABM bars. To take control of the whole package a pair of the right Rebelmoto switches were adapted to fit and join an Accossato quick action throttle, that also removes any slack from the system. The finished product rolled out of the garage badass in black and with all of the functionality you’d expect from a big Bavarian. He might have been away from bikes for 23 years, but the bug has truly bitten with Marek already scanning the net for his next build.