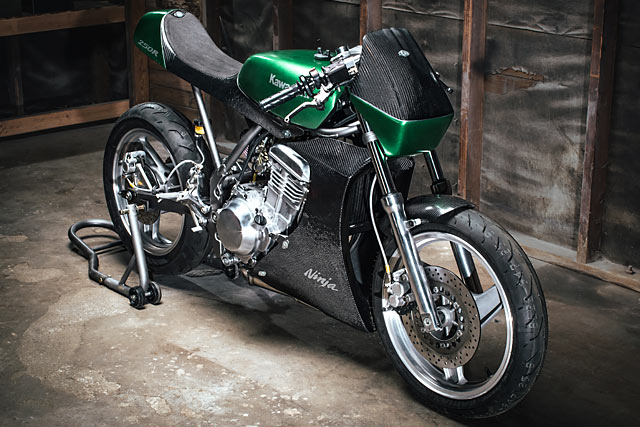 Chicago’s Chris Zahner might be a bartender, but I think he’s a damned magician. Look at his latest bike – a 1987 Kawasaki Ninja 250 – a motorcycle a generation of boy racers learnt to ride on. They were dropped in car parks, dumped in corners and had gearboxes so abused they should have been taken into government care. People rode them into the ground and then forgot about them. But not Chris, who built a track day racer around a bargain basement EX250 he picked up one night at work. ‘It landed in my lap last year, about a week before I was due to pack up my van and move to Chicago from New York,’ Chris explains. ‘A middle aged lady and her friend sat in the restaurant I was bartending at. We ended up talking about motorcycles, how she used to ride a Ninja but it’s been sitting in her garage for 10 years unridden, and her husband has been begging her to sell it’. With his interest piqued, Chris headed out to see the Ninja the very next day. It was in pristine condition, with only 4,200 miles on the clock. And the best thing? It could be his for $300. Well, on the condition he took the lady for a blast around the block on the back of his Harley. Oh, and she made him promise he’d make sure the Ninja would ‘live out a glorious life’. Easy. But there was only problem. It didn’t have a title. There’s ways around a lack of title in the US, but Chris had been eager to get a beginner’s track day bike up and running. And it seemed like the EX250 would fit the bill perfectly, without having to take advantage of the well-known ‘Vermont loophole’. But then he got distracted by the mad buggers on the Kawasaki Ninja forums. They shouted and screamed the ‘86 and ‘87 models were the most desirable Ninjas built and the second-hand market would snatch it up. So Chris advertised it for 75% of the ambitious price they said it was worth. Nobody bought it.

[superquote]“They shouted and screamed the ‘86 and ‘87 models were the most desirable Ninjas built and the second-hand market would snatch it up.”[/superquote] So he stuck with the Ninja. And while the guys from the Kawasaki forums severely overestimated the desirability of a 80’s learner bike, they did have a winning recipe from a fun track day Ninja. Swap out the front suspension and wheels from the bike’s older brother, the EX500, fit RaceTech springs, gold valve cartridge emulators, a rear shock from a Z600, larger fork diameters and 17” wheels. And then you need to make the bike lose more weight than a back alley crackhead. But we’ll get to that in a moment. Firstly Chris lightened the loom, swapped the standard battery for a light four cell Antigravity model and made a new rear subframe, housing the electronic components and radiator reservoir. Letting the bike breathe more is a series of Cone Engineering exhaust bends making up a 2-1 system with a mini megaphone at the tip. The fuel tank is from a 70’s Kawasaki enduro bike of unknown origin, which was cut, widened and mated to the original Ninja tunnel.

When everything was in place Chris focused on the fairing, which he’d decided to make out of carbon fiber. ‘I’d never built anything out of it,’ he says, ‘but after watching several YouTube videos I was confident enough to give it a go.’ Chris affixed a rear cowl from an old Kawasaki H1 and filled the entire cavity of the frame between tail, tank and exhaust tip with Great Stuff foaming insulator in a can. That resulting marshmallow was shaved down with a surf foam file, refined with autobody filler and smoothed with 2k high-build primer to create a plug. For the front fascia he hacked apart a tail section from a GPZ1100 to simulate a square headlight and then repeated the process. From there the fiberglass moulds were made, from which Chris could lay up and vacuum bag the final carbon parts in.

Lastly all coatings were removed from the aluminium parts, the engine cases, rear suspension linkages, fork lowers and triple trees were given a rough buff to tidy them up, but not to give them a mirror finish. ‘After all,’ Chris adds, ‘it’s going to be flogged at track days and this is the prettiest it’s ever going to look’. And it looks damn pretty. To think that Chris Zahner took a often-overlooked learner motorcycle and turned it into something as incredible as this is racer nothing short of astonishing. And as radical as some of the bodywork is he’s managed more than a few nods at Kawasaki’s history. Notice all the parts the moulds were made from? All vintage team green components. It’s equal parts retro, modern, insane and hilarious. And that’s the best damn kind of custom bike there is.