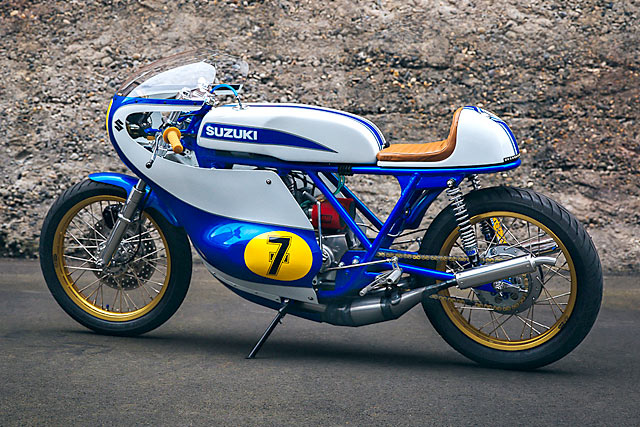 It all started in the last ten minutes of a Saturday afternoon showing of Little Fauss and big Halsy. The sound of a 2-stroke road bike and that bubbly vintage road race fairing. Then a quick glance at Airtech streamlining for some more inspiration. Yes. A well-timed search on Craigslist and there it was; a rough 1975 Suzuki T500. At first it was going to be a fun little bike build, and then I would sell it for a couple of bucks. But the deeper it got, the more I realized I was building my dream vintage road race bike. The Weberworks ‘No.7.’ After a total strip down, the Airtech bodywork fitting started and being molded off a TR500 race bike there was much fiddling to do. With no existing attachments to start with, custom mounts were made for the tank and fairing, and a frame for the seat and oil tank. Suzuki’s 1970s frame construction left much to be desired; it was stick welded and crooked. After much grinding and cleaning, I added a seat hoop and diagonal frame stiffeners à la the original TR500, and it was ready for powder coating. Sticking with a blue and yellow Suzuki theme, a metallic blue flake was chosen for frame. After throwing around ideas with Paul Miller, he painted up the vintage-feeling stripes and swooping lines. Since it was already a nicely running bike as purchased, new pod filters and some Jemco pipes were modified to fit the tight bodywork. After a bit of jetting, work the engine was done. I chose to clean and polish as many of the original parts as possible to keep the character of a 40-year-old bike. And where it wasn’t possible, as many NOS parts were used as possible to keep an authentic factory feel. Then my girlfriend created a elegantly simple leather seat. To contrast all the blue and white, gold anodized rims were custom punched and laced. This era of racer should have a big set of 4LS front brakes, but what came on the bike was a set of old-school Betor forks from an unknown dirt bike. Needless to say, they stayed. It was all built in my garage with no drill press, band saw or vise. Many little hand-cut and neatly filed bits are hidden everywhere. In the end, all the hard work is payed off with that sweet smell of castor oil and the wonderful sound that only a 2-stroke can produce. With a wide power band and a very ‘laid out’ riding position, carving up the hills of Portland on this Suzuki racer brings on a huge smile. I can almost see Barry Sheene just around the next corner.