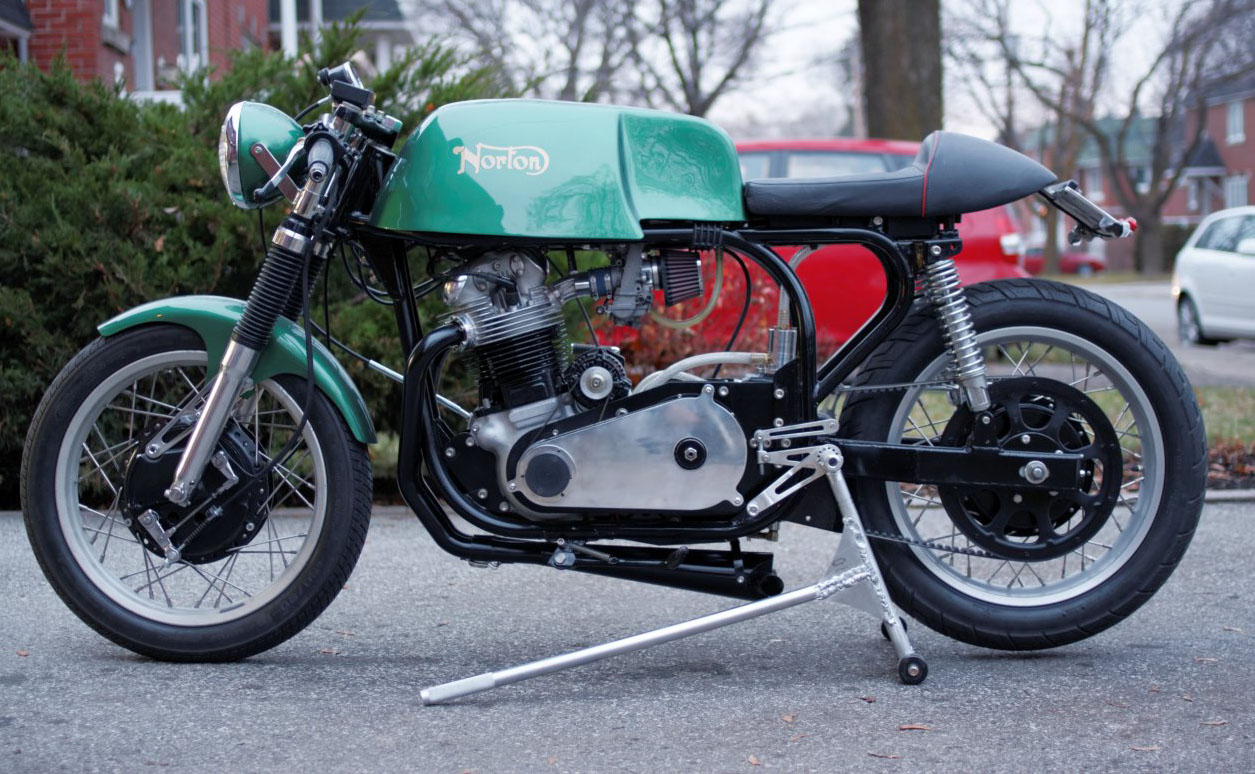 After a chance encounter with a Featherbed framed Commando powered café racer, Canadian Jean Des Rosier’s blood started pumping again and he quickly realized he wanted to build something similar. Luckily, Jean had a few parts in storage “I had a featherbed frame, a complete front wheel including a Suzuki front drum brake, a transmission, the front forks, the rear shocks, a bit of money and lots of time” he says. Jean sent us a six page document telling us about his motorcycle history and some details about this Norton Cafe Racer project. This is the abridged version:

I had a Featherbed frame (the one from the ’68 Atlas) stashed deep in my brother’s basement in which I had plans to install an Ariel 500cc single, that project was put away when I raised my family. Even though it was almost complete, the thought of building a nice Atlas and better still an Atlas café racer was in my mind from that day on.

I went to see my friend who has been building and repairing British bikes all his life and shared my ideas with him, something I should have avoided because he is the one who said “why not put a belt final drive on it?”  I guess I could have walked away right then, but he did promise to help me with the parts I would need to complete the build, little things like an engine…

In his attic, he had my old Manxman frame, it was now painted black, but scratching the black top coat revealed the original factory blue paint lying underneath. My friend agreed to a trade, I had an Atlas frame which had matching serial numbers to an engine he had for the Manxman’s frame. I don’t know when, but he had bought the bike I built years ago, he had sent my fiberglass parts to be painted, but they were lost by the paint shop so he never rebuilt it.

My first purchases were the front and rear pulleys and the belt I would use; there was just enough room to run the thinnest belt made by Gates which is 20mm in width. I modified the rear pulley from 38mm to fit my belt, the front pulley was modified by a machinist because it was just too hard for my little lathe, and the machinist welded it to a cut down Norton gearbox sprocket.

From then on, it became clear the stock swing arm would not work, for one thing, the left hand side would not clear my big rear pulley and since the belt I bought was a bit longer than ideal, the swing arm had to be extended. My engine plates canted the engine forwards Commando style and they positioned the gearbox closer to the engine like a Commando, not a good situation since the gearbox output shaft was now 10 cm further from the swing arm pivot.

Looking at pictures of other Featherbed / Commando hybrids, I noticed some people hiding the battery behind the gearbox, if there was enough room to hide a battery, why not put my oil tank there? Quick calculations gave me a 2 liter capacity which is the minimum to keep the engine lubricated. Playing around with pictures on my computer, I thought about moving the swing arm pivot forwards and incorporating the oil tank in the swing arm.

There was a lot of time spent just looking at the bike in the garage or on pictures just so I could find a build line. By putting the oil tank behind the gearbox, I had the basic idea, keep the back of the bike free of anything, no visible oil tank, no apparent battery box, no back fender, hidden wires. Some of my modifications were due to earlier choices, such as the alternator, I used a 30mm wide racing belt with the ignition pickup at the end of the crank, so no stock rotor and stator could be used. My first plan was to drive the alternator from the timing chest just like the old magneto or points on the earlier Nortons, but again by playing with parts I saw I could make a thin pulley and make a very simple good looking belt drive.

As much as possible I try to make all the parts myself. I have a small 9” South Bend lathe which has proved invaluable in making many things that are impossible to buy on the open market just because no one makes them, case in point, my oil manifold, I wanted the feed to come from the bottom and the return to go out towards the top, nothing like that exists. I made tools to be able to use my lathe to do basic milling operations, something I had never done before. I use a small band saw as well as my radial arm saw to cut many of the aluminum plates I used on my build.

As time went on and the build progressed, I found myself redoing many of the parts I had made earlier, either because I found a better way to make them or to fix earlier “mistakes” or just to make the parts look better. I bought a TIG welder to be able to complete my café racer, especially to make the exhausts. I was quoted an exorbitant price to build them the way I wanted so I bought a lot of mandrel bent tubes and a two into one collector and built my own. I have since used the welder a lot to practice for my next project.

If Jeans next project is anything like this one, we look forward to featuring it on Pipeburn. You’ve probably guessed that Jean is a stickler for the details, and what build would be complete without the whole project being photographed from start to finish – it shows the hours of work that he has put into this bike.

Now Jean has started his new project he has decided to place this stunning Norton Cafe Racer up for sale, so if you are interested, send us an email and we can get you in touch with him.