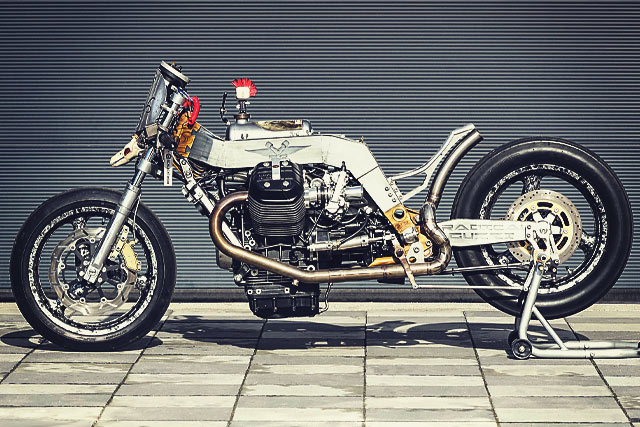 Despite the success the Radical Guzzi team achieved in 2016, they knew that resting on their laurels wasn’t an option. The old drag racing adage, “When the clutch drops the bullshit stops” means you’ll look like a proper fool if you’re unwilling to improve.

So two full seasons ago in 2015, Stefan was looking to build a bike that would be competitive in years to come. For the past eight years he’s built a reputation for crafting some of the most incredible Guzzi’s on the planet. Largely focussing on the company’s latest offerings, his choice of model for his drag machine will leave most bemused and confused. Firstly because few have ever even heard of the short lived Quota 1000 adventure bike and secondly, a bloody Dakar machine for the drag strip? Well, yes. With a limited budget and a bunch of old bangers out the back, Stefan’s mind went into overdrive when one of the lads dragged the 1992 Quota 1000 into the shop.

“After a few minutes, one of the guys comes up with an old frame of an off-road Guzzi. In my head I immediately saw the image of a drag bike – and so we got started,” enthuses Stefan. And while the model choice is a little left field, there is a big advantage to what the Quota frame offers. For all of the Quota’s failings, Moto Guzzi had at least designed a new steel frame, ditching the old tubular item. In its place was a twin beam unit that runs from the headstock to the swingarm, with a bolt-on cradle to support the motor. Absolutely perfect for a drag bike where quick engine changes and maintenance can be performed, even between runs.

The frame has been seriously slashed; an angle grinder wielded in anger removed vast amounts of subframe, bracketry and weight. Then new welds were run in the appropriate places to give the chassis the strength it would need. With the main frame sorted, attention turned to the subframe with the focus on getting the rider seated as deep into the bike as possible. The positioning keeps the rider’s weight centralised around the engine, with a set up that forces the pilot to lay over the frame. With the rider flying superman style, the stock foot controls needed a total rethink. The left side uses a long linkage that joins a lever arm and allows for precise and quick gear changes.

The rear is a little simpler. Also mounted on the rear axle, it actuates a Brembo master cylinder. The stock Quota did have a rear disc, but Stefan has switched to an under slung Brembo caliper arrangement for better stopping and easier removal of the rear wheel. That wheel joins the front in replacing the spoked factory items for lighter weight sportsbike units that also allow for the fitting of race rubber. Up front is a standard Shinko slick, but it’s the rear’s Reactor II wrinkle wall drag tyre that gives NOSferatu insane levels of grip. The big slick starts spinning when the throttle is pinned and the clutch dropped on the new clip-on bars that sit low. So low, infact, that they are almost on top of the lower triple tree.

Both upper and lower trees have been switched out for beefy billet items and its modern Guzzi forks are drastically lowered and stiffly sprung. The brake lever operates the now single disc front, with a custom caliper and a wave pattern disc to reduce unsprung weight.

With the rolling chassis now complete, Stefan could start to work on the vital accessories of any purpose built drag machine. “The hardest part of the build was to put everything on the bike and keep it almost invisible,” explains Stefan. The fact that the wiring harness is almost impossible to spot makes you realise that he’s done a damn fine job, too.

The hand built gas tank resides between the bulky frame rails and only holds enough fuel for a few runs. But there was one more item left to secure; the team’s rider, Josef “Lightning Sepp” Leitl. He’s a 25 year veteran of drag racing and he likes his machines to run a little giggle gas.

So when he visited the Radical Guzzi workshop to see how NOSferatu was coming along, he brought along his own nitrous system to be part of the build. The nitrous feeds the insane motor with many of the specs remaining a secret, but we do know that it’s based around a modern 4-valve Guzzi engine. With the bike competing at events like the Glemseck 101 over the 1/8th mile, the engine has undergone a variety of changes. Initially it was sleeved down and given a crank change to get the capacity within the regulations.

[superquote]“Despite the fact the engine is a test mule it still managed to pump out 220NM of torque when strapped to a dyno.”[/superquote]

Along with the nitrous, flatslide throttle bodies aid in instant response and that beautifully crafted exhaust gets the gases flowing out of the other side. Despite the fact the current engine is a test mule for their racing program, it still managed to pump out an enormous 220NM of torque when strapped to a dyno. Nice.

But Stefan isn’t done there. “First we’ll get this one sorted out, then we have a new 1700cc engine to slot in.” With all this mechanical madness going on, the visual side hasn’t been ignored either with Herbert Franz taking care of paint. On one side of the bike is a wood effect finish while the other is made to look like raw machined steel. Just like night and day, then. There’s also some truly quirky parts, including the small deer skull at the front of the bike which has saw blades as teeth and red LED eyes.

But the pièce de résistance comes when staging the bike; Josef performs the mandatory purge of the nitrous system, with the excess gas shooting out of the skull’s nostrils. It’s fair to say that most drag racers are a little “different” but the results speak for themselves. NOSferatu is already snarling ready for its next outing at Monza in May. BYO garlic.