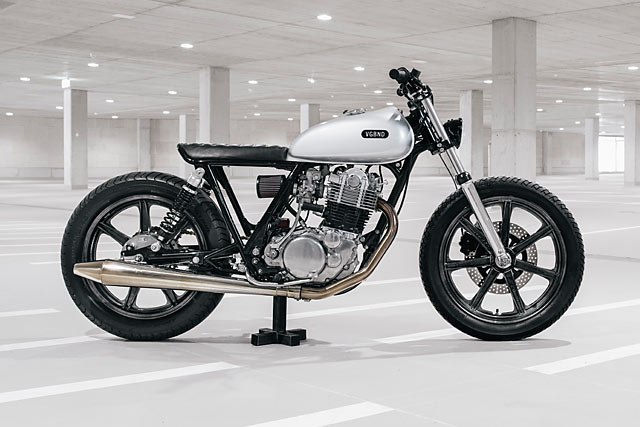 Rock ‘n’ Roll had The Blues. World War I had Franz Ferdinand. And television had Philo Farnsworth. Every big event has its ground zero, and for modern custom motorcycles, it was the inimitable Yamaha SR500. More specifically, it was Japanese Custom shops in the 90s and their ready, cheap access to the bikes that kicked things off. And here we are today, enjoying the fruits of all their hard work. Keen to acknowledge where it all started, Austria’s Vagabund Moto decided to throw their hat in the ring with a classic SR build of their own. Meet the ‘V06’. “Our idea for the design was not to reinvent the wheel,” says Vagabund’s Paul Brauchart from their Austrian headquarters. “It was more or less based on the idea of building an homage to the classic Yamaha SR500 with a Vagabund twist on it.

And while we’ve cheekily gone and called it a brat here, it seems Paul might disagree. “It’s a mixture of many styles. We don’t like to define a particular style for our projects, because we only add the parts which we think best suits each build. If we were to say, ‘OK, let’s build a classic cafe racer this time,’ we just would minimize our creative possibilities.” For this build, Vagabund’s main aim was to build an SR which was, first and foremost, really nice to ride. “So we decided not to make it too low. It’s about 5cm lower at the front and 1cm taller at the rear, mainly to just get the lines looking straight.”

They also decided against clip-ons, knobby tires and everything else that might limit the bike’s riding characteristics. Similarly, they scrapped all the factory electronics that weren’t needed. There is no battery, no electronic control units, no nothing. “As usual, we started by designing the lines, shape, color and style of the bike by doing a sketch or two of it. In this case, we also ended up discussing what was important for the finished bike’s handling as we wanted it to not be an afterthought.”

Then once the calls had been made, the work began. They started buying, building, modifying and mounting the parts they would be using before a complete pre-paint disassembly. “On this build, nearly everything is new. The engine has been completely overhauled and nearly every screw, bolt and nut is factory fresh.” “The tank is an extensively modified Yamaha RT360 unit. Everything under the outer shell has been redone, and was then attached to the original oil tank and electronics.” Also note the slick, embedded Motogadget Motoscope Mini in front of the fuel tank’s cap. At the other end of things, the rear frame was completely redesigned, taking inspiration from what we assume was a snubnosed .38 revolver. There’s also some Motogadget m-blaze pin indicators and a Shin-Yo LED tail light that’s been integrated into the rear frame loop.

[superquote]“The rear frame was completely redesigned, taking inspiration from what we assume was a snubnosed .38 revolver.”[/superquote] Cleverly, Vagabund also 3D-printed the bike’s switchgear to provide an all-in-one light, horn and turn signal set-up. Then there’s the modified LSL handlebars, the long and low stainless steel exhaust, some YSS shocks and a set of understated LSL footrests. “As on every one of our bikes we are really into the details, so I would say that the part we like the best is the tank.” And with its minimal looks and beautifully integrated Motogadget speedo, the comment isn’t likely to receive any arguments from us. In fact, the tank downright makes the bike. “The hardest part was to get the RT360 tank on to the SR500 frame, because it was way too narrow on the inside,” says Paul. “SR’s tanks are mounted to the frame’s top tube, which also happens to be the bike’s oil tank. Changing a tank usually means new mounting points have to be welded to the oil tube But we tried to avoid this by designing a brand new mounting system. We also modified the outer shell to ensure that the tank would fit perfectly to the frame and so that we would have a clean interface between the tank and the seat.”

Did someone say ‘clean’ and ‘perfect’? When it comes to this little Yamaha, we couldn’t agree more.