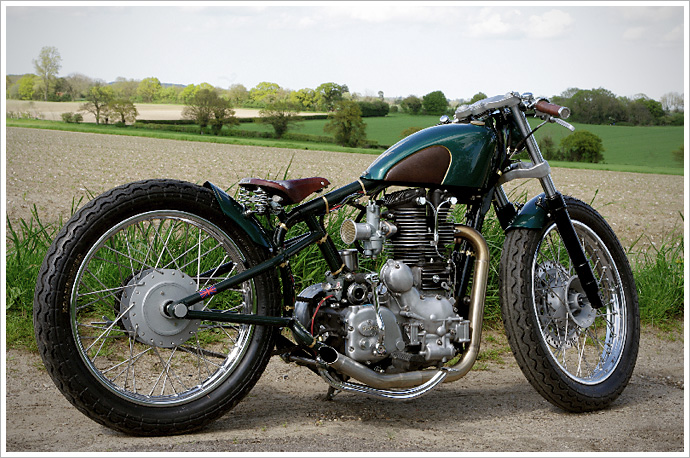 We get our fair share of emails here at the House of Pipes. Lots of new bikes for us to ogle, links, images, and more than a few requests for bike builds. Yeah, we’re not sure why they keep asking either; I suggested to Scott that we just take their deposits and then skip the country, but he didn’t seem to be into it. And sometimes we get a tantalising look at a bike build in progress where you can see that the guys doing the wrenching are definitely on to a good thing. In the case of the guys at Old Empire Motorcycles, we had been chatting to them for ages – so long so, in fact, that we’d all but given up on them ever finishing. But just when you think all hope’s lost, blammo – you find yourself looking at one of the coolest pommie custom bikes in recent memory. Tally ho! Here’s Alec Sharp, Lord Regent at O.E.M. “Old Empire Motorcycles was born through an absolute and enduring passion for everything two-wheeled. Experience gained through working at a similar enterprise only fuelled a desire to put our own stamp and style on the motorcycle world and show people what we can do. Combine this with a vision to draw interest from a broader and more diverse audience, we believe we have something special; something that we want other people to be a part of, and something that we hope other people will want to be part of.” “The Pup takes takes you back to the fundamentals of motorcycling where handlebars, a seat, some wheels and an engine is all that is needed to enjoy the ‘purity’ of riding a British made, handmade custom motorcycle. A blend of bobber and boardtracker, the Pup is a perfect mixture of old and new.” “Its namesake is the Sopwith Pup, a world war one biplane flown by the RAF in its infancy. Its small size and manoeuvrability made it a popular choice for young British pilots, which we felt was apt as our Pup seems to share those very same characteristics. It is the resulting product of using modern day engineering and reliability in a combination with the sleek and classic aesthetics of bygone days which really makes this a special and unique motorcycle both to admire and to ride.” “‘Pure Motorcycle’ sums up how we like to design and create our motorcycles, taking a back to basics, stripped down approach to create rideable motorcycles in their purist form. Times are changing and things have to change. We are tired of ‘British’ companies talking the talk when it comes to a ‘British made’ product, but failing to walk the walk by having their products made exclusively abroad. However, it seems that the tide may finally be turning to the point where businesses are beginning to reinvest in the design and the manufacture of their goods back home here in Great Britain.” “This is something that we want to be part of, thus our aim is to design and craft as much as we can entirely in Britain. We realise with a little foresight and selflessness that doing this may inspire others to and will eventually be of great benefit to us all as we can begin building a better future for our economy and country.”

Here here! Now if only you guys could just do something about that weather of yours…