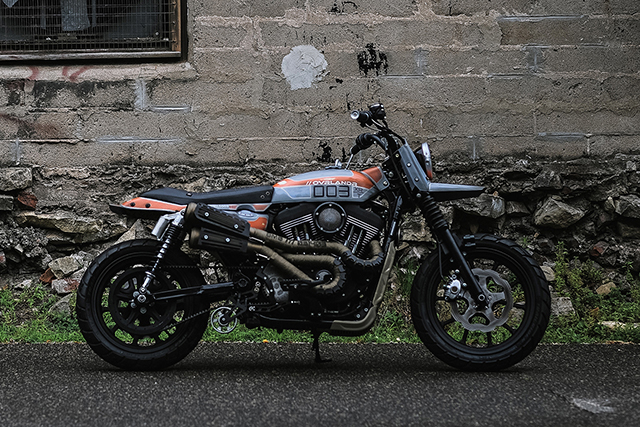 As time goes on, the number of niche custom motorcycle categories increases. Flat tracker, becomes a street tracker, with a touch of café racer, and so on ad infinitum. One area that encapsulates a few areas, while maintaining its own unique identity is the post-apocalyptic style of build. From Icon 1000’s Dromedarri to El Solitario’s Petardo, these bikes have a flavour all of their own. They are visual sledgehammers, built to create conversation, and most of all to be functional. Combustion Industries has just rolled out their latest build, a 2008 Harley Sportster 1200R. Picked for function, as well as form, Michael Bates of Combustion Industries has utilised his experience and contacts in the bike industry to create one rugged bike that looks like it could survive the end of the world. 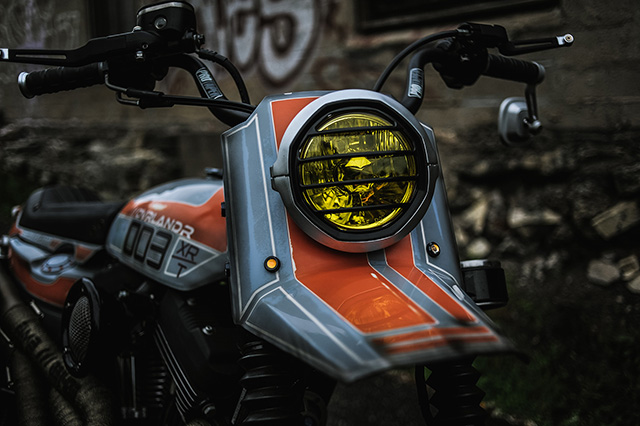 Michael has always been into motorcycles, right from when he dropped his first motorcycle on the driveway during his maiden ride. Starting off as a designer in ‘high-end plumbing gear’, he moved onto product design at Kuryakyn, an American aftermarket parts supplier for bikes. Michael has a good philosophy on building a custom bike; “A rule that I have when I am building or customizing a bike is that I want to create something that I or someone else is going to be able to appreciate and want to keep running literally forever. That means that the design has to be timeless, and the engine can’t be so crazy that no one will be able to service or repair it if it needs it. Parts for the Sportster are plentiful (and fairly cheap), and you can literally take the simple tube frame design in any design direction.” With this in mind, he undertook the build with a view to mix hooligan, scrambler, adventure touring, trackers and enduro design cues all into the one machine. 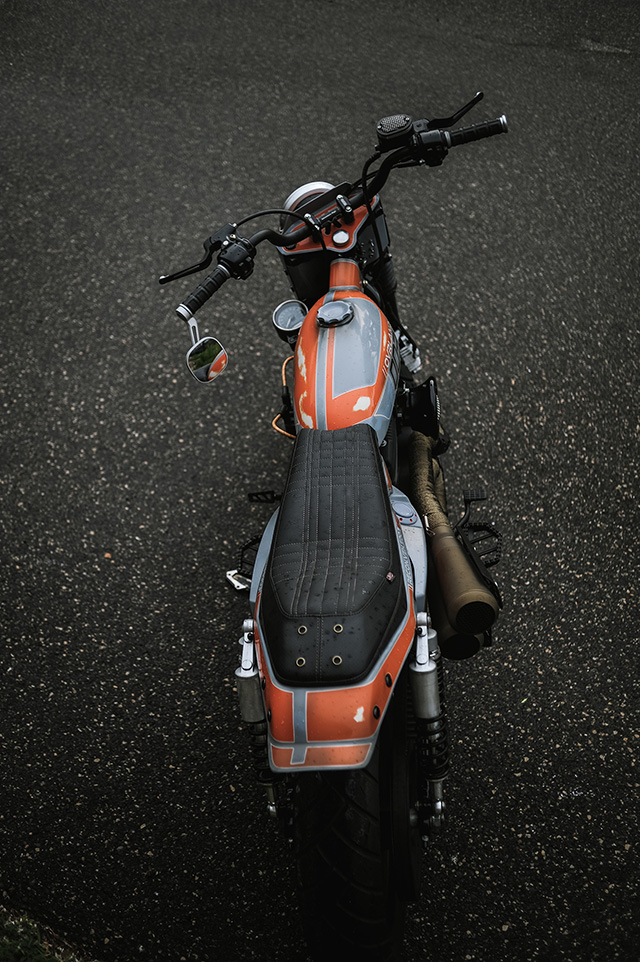 Combustion Industries was happy with the Sporty’s EFI, for “both response and reliability.” Utilising a tank that had been sitting for a decade waiting for just the right build, the EFI setup was a bit tight fitting into such a low slung tank, with some slight machining required on the sender to fit it into the tank. The electrics have been reworked as well, the factory battery is replaced by a lithium battery, with the bike’s ECU sitting in the battery box thanks to the extra space. A vintage tacho and switch cluster sits behind the frame neck, the rest of the gauges relocated to the forks in a side mount. 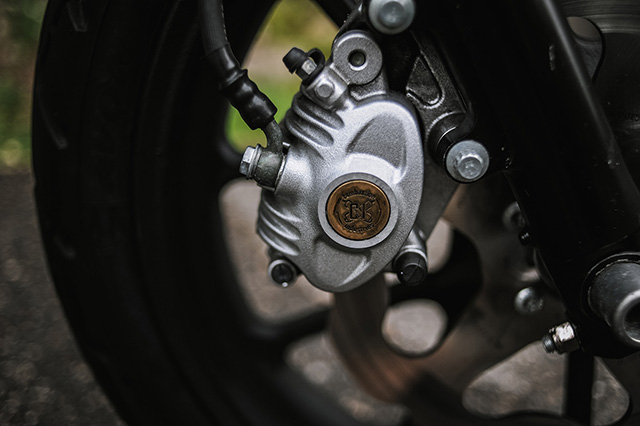 Many of the parts used in the build were created in Michael’s own garage/workshop. With a small press brake, welder, and bandsaw, Michael was able to draw on his experience to get the finish he was looking for. Creating cardboard templates, folding them into the correct shape and ‘once dialed in’ was able to create body work like the fairing, fork brace, and exhaust shield. The seat is an in-house creation, the foam cut and shaped in the Combustion Industries workshop, and trimmed by Mustang. 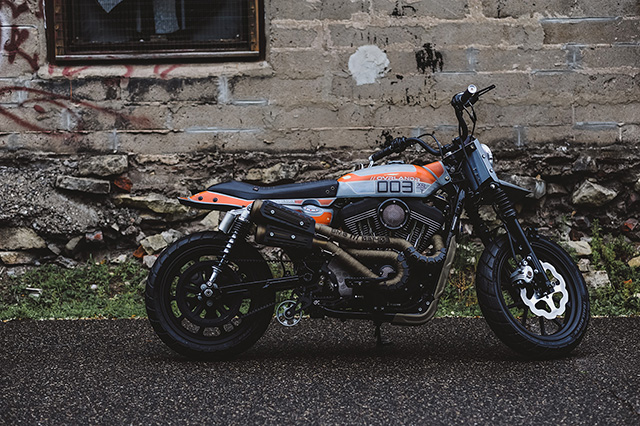 A lot of the bolt on parts found on the build are from Kuryakyn’s own Dillinger product line. The rugged futuristic design of the range fits in perfectly with the build, from the levers to the skid plate, the bike is peppered with Dillinger componentry. Floorboards on the bike are Riot mini boards, and the air cleaner is the Velociraptor, also accessed through Michael’s parts connections. Element Ironworks contributed ‘all the nice welds’ on the build, and the custom paint job was done by Gilby’s Street Dept – who took Michael’s paint ideas and brought the project home.

With access to so many aftermarket components and the skills to make parts, Combustion Industries was already onto a winner before the build even started. From highway cruiser to post-apocalyptic road warrior, Mike put it best when he said “Riding is freedom, having a vehicle that can tear ass and pass through the hinterlands takes the freedom of riding to the next level” – just watch out for zombies. 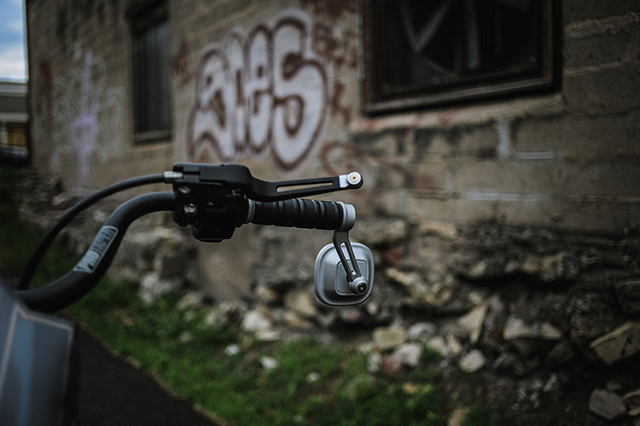 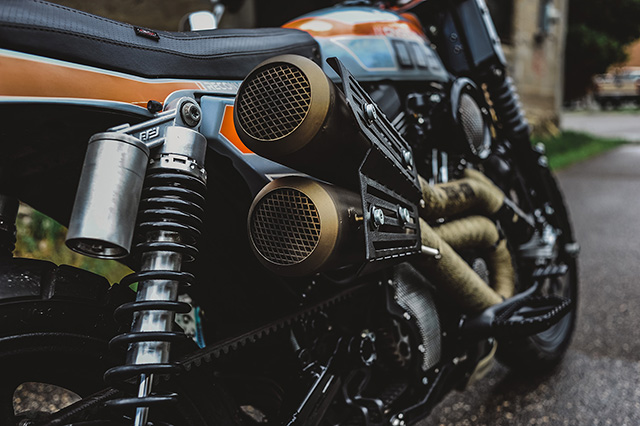 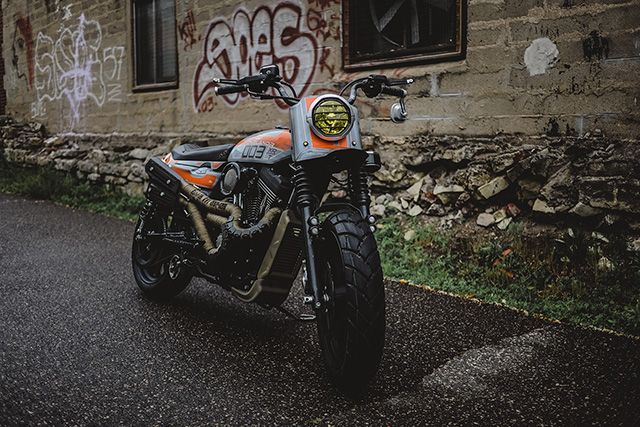