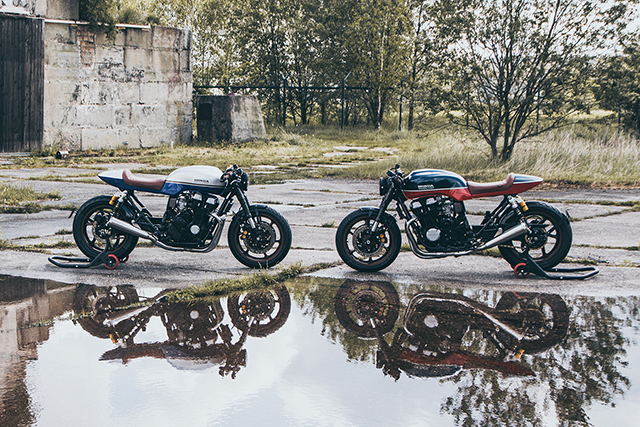 There is a fear amongst some about handing over large amounts of money for a custom motorcycle and with more manufacturers offering factory-tuned machines complete with a warranty, that decision can be even harder. But to prove you can have the best of both worlds, Germany’s Kaspeed Custom Motorcycles have crafted a limited run special, developed and tested for over a year on their in-house prototype. Based on late ’90s Honda CB750s and available in both Racer and Heritage specification, the first two bikes from the company’s SevenFifty range are here. With only 10 available you’ll have to be quick, as bikes #1 and #2 are already in their owner’s hands and boy are they pleased. 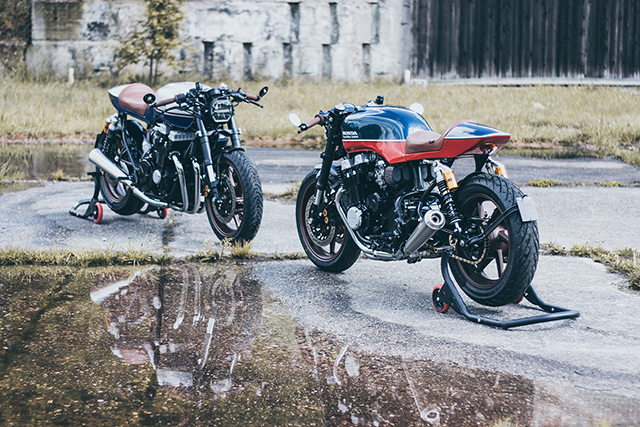 “What you have built is worth every penny!” was the first report to come back from owner number one and the team at Kaspeed knew the hard work and investment had been worth it. The Saxony based outfit are a three man team, a father who is a mechanic and all-round builder is joined by his two highly skilled sons. One with a degree in mechanical engineering and race experience and the other a technical modeler in the car design industry. It’s little wonder then that when they set out to do a limited production run of bikes they were always going to do it with that German precision we know and love. 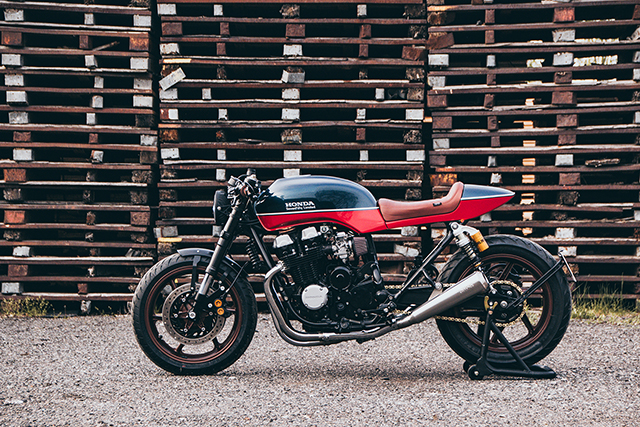 After an enormous number of hours in research, development and construction “the prototype premiered at Glemseck 2018 at the Honda stand and also received great feedback from reports in national print magazines and at German & Austrian motorcycle fairs,” Kaspeed’s Jimmy tells us. It was at the Glemseck event that the first two customers saw the SevenFifty for the first time and they were quick to place their orders, both choosing the Racer variant. The primary difference is the higher end suspension on the Racer, with the Heritage offered at a lower price and both are built to be 100% street legal in the buyers country of origin. 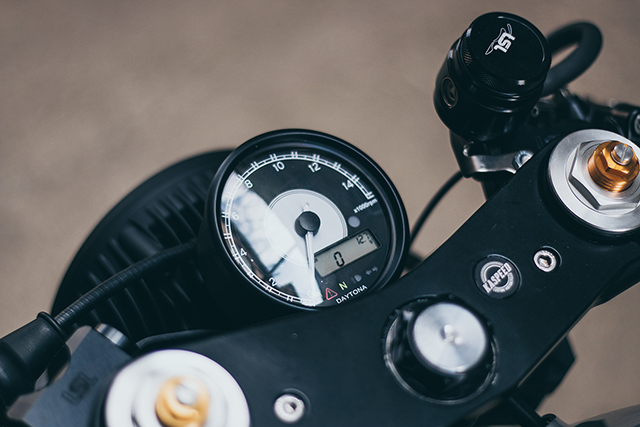 Choosing the 1996-2000 Honda CB750 makes a hell of a lot of sense, a widely available bike that was de-tuned from the factory, with the big H’s well-earned reputation for reliability and build quality. The hydraulic lifter equipped engine will do 100,000km with ease and not having been a popular donor bike for customs, yet, clean examples are everywhere! Two good condition, low mile bikes were found locally and the bikes built side by side. “the whole bike underneath was engineered to be a lot more reproducible than the usual one-off custom build,” Jimmy explains of their meticulous approach. 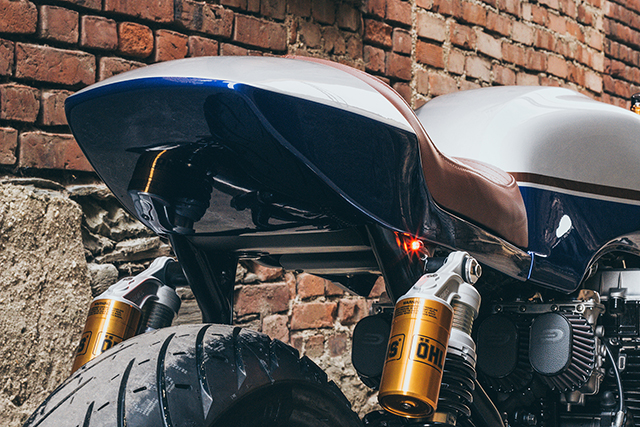 Each frame is taken back to the metal, all the unnecessary tabs and brackets are removed and the subframe is cleaned up and re-shaped. Then along with the swingarm, the frame is given a fresh dusting of powder coat for a hard-wearing finish. The factory fuel tanks are retained but are elongated and re-welded for a much cleaner line. While the tail section is designed with CAD software and molds are made than can handle repeated use. Before each tail section is created by laminating carbon-kevlar fibre reinforced-plastic; for an absolute high-end finish. 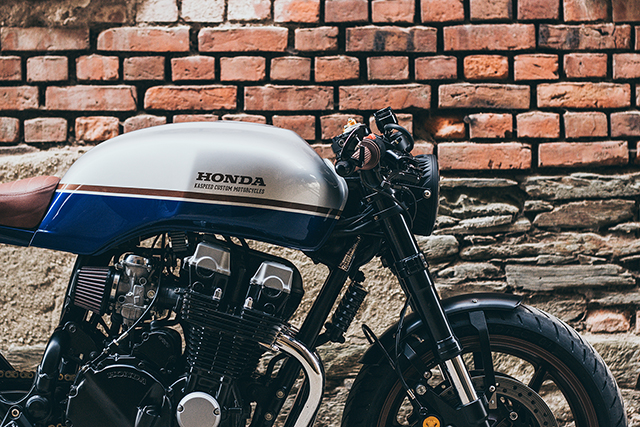 Then the tins painted with bike #1 receiving a Rothmans Racing inspired scheme with a modern touch in silver, bronze, and metallic blue. While bike #2 gets a retro racing theme with deep blue turquoise and fire red, separated with a white pinstripe. The level of finish is absolutely beautiful with each bike fitted with its own hand-stitched leather seat and grips in a matching colour. With a concerted effort to keep the lines neat, a modern KOSO Thunderbolt LED headlight and Daytona Velona tachometer ensure nothing bulky distracts the eye. 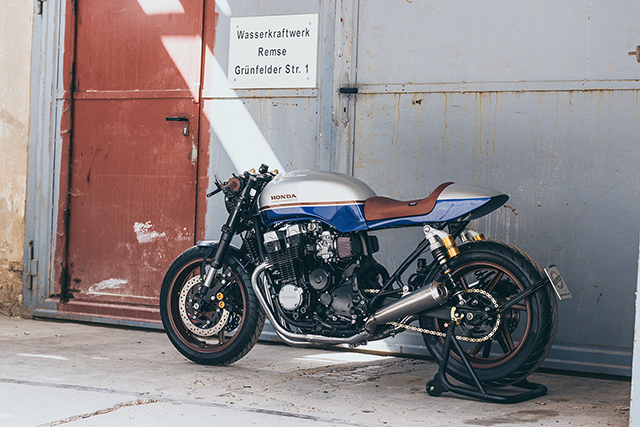 To bring the performance up to scratch the Racer variant goes to considerable lengths with a full suspension and brake upgrade. Taken from a Yamaha R1 RN09 the USD forks and calipers are made to fit with a steering stem from Cognito Moto. While the newly bronze coated factory wheels are adapted to fit with a CNC machined axle and spacers to allow a set of big drilled rotors to be bolted on. Out back Kaspeed worked with their build partners at Ohlins to have a set of HO141 rear shocks built to suit. With rider input coming from LSL clip-ons and rearsets and premium Metzeler Roadtec rubber making contact with the ground. 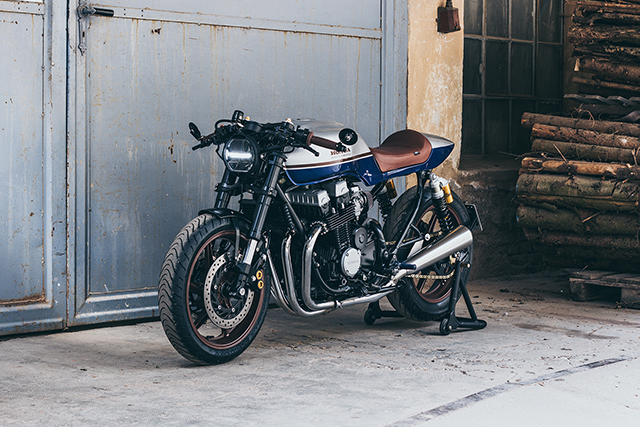 The engines are given a thorough check over before being painted Honda black and NSX silver. The removal of the airbox, use of DNA air filters and a tiny battery mean there is a lavish amount of negative space behind the engine. But your eyes are soon drawn to the Classic Racer Stainless Steel exhaust fabricated by another build partner, LeoVince. The electronics are re-done with a combination of Kellermann and Motogadget parts, while a blacked-out alloy front fender and rear plate holder mean not only do the bikes meet all road rules they’ve been individually TUV certified. With both owners already having put plenty of miles on their machines without a problem, the latest message from #2 after 370km in the saddle sums up the entire SevenFifty project “Mission accomplished 100%!” 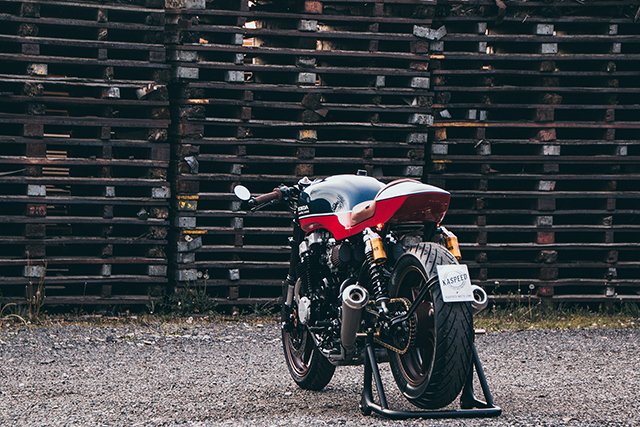 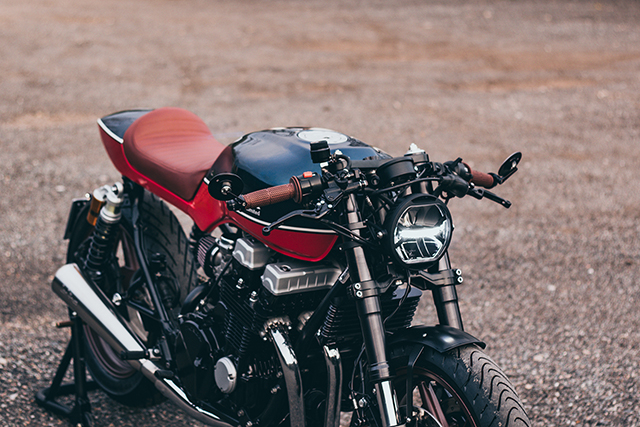 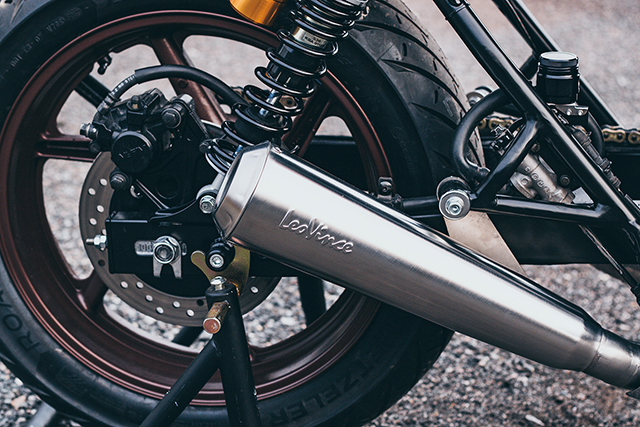 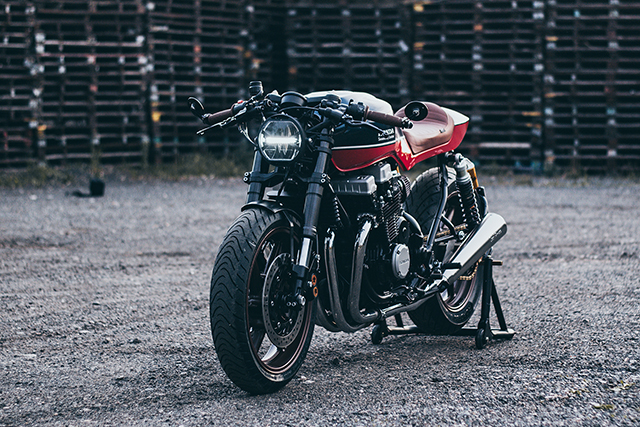 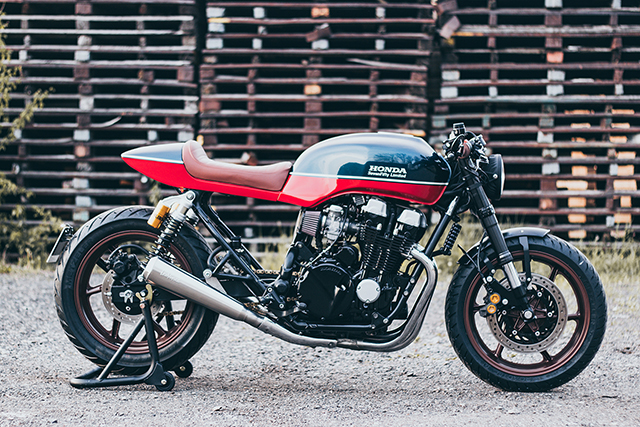 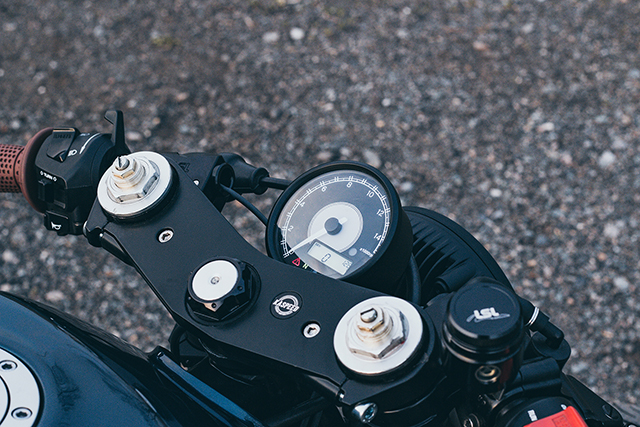 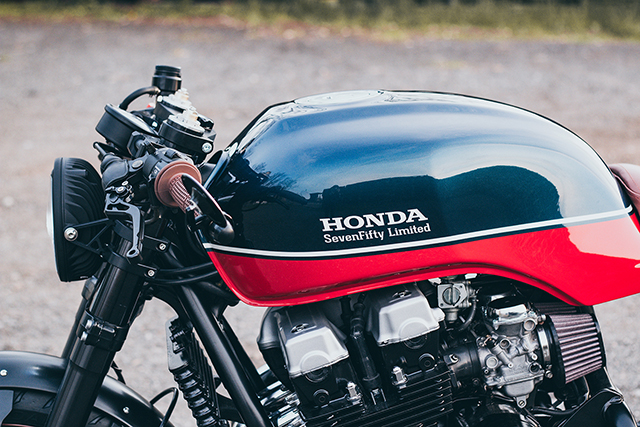 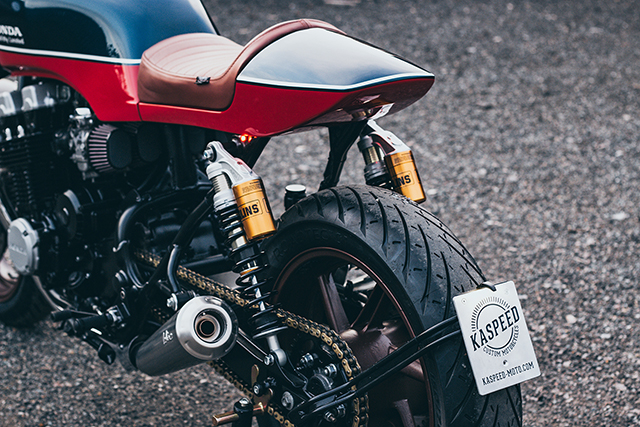 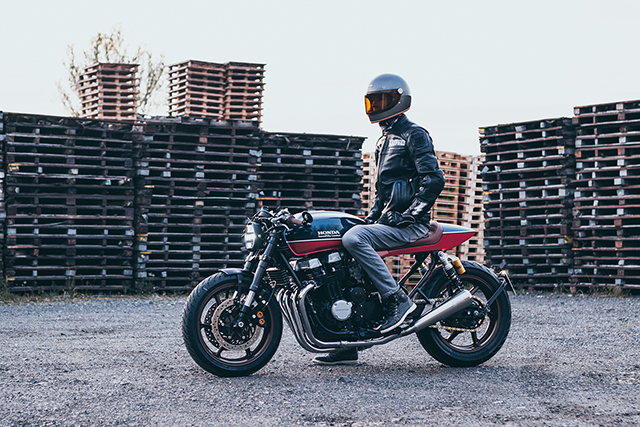 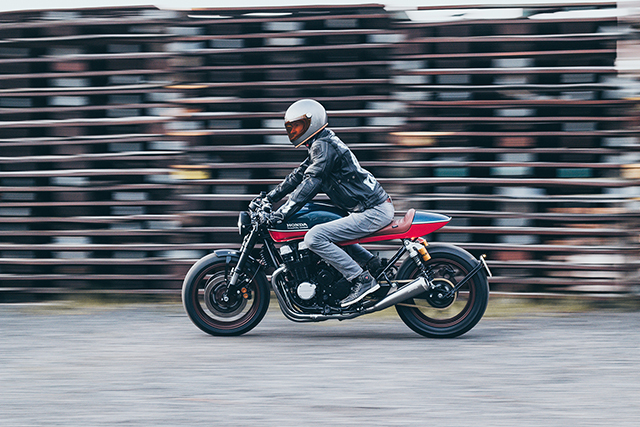 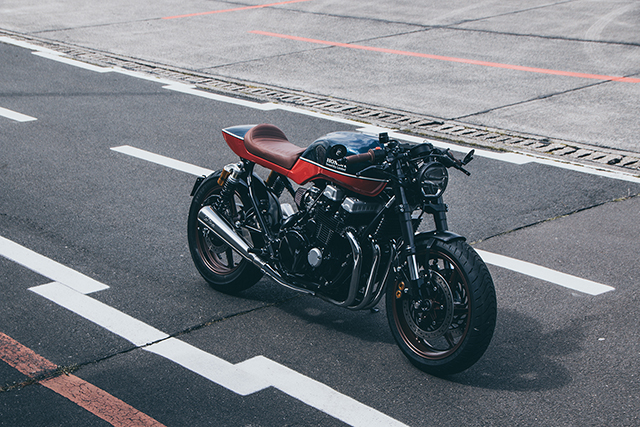 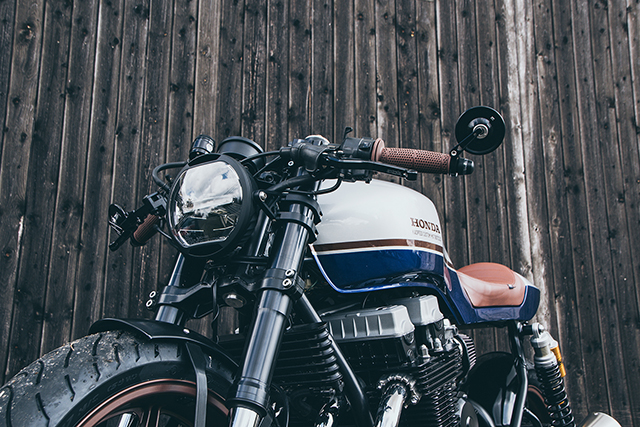 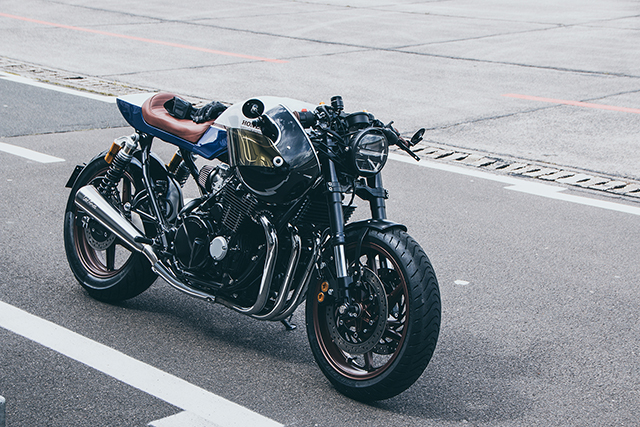 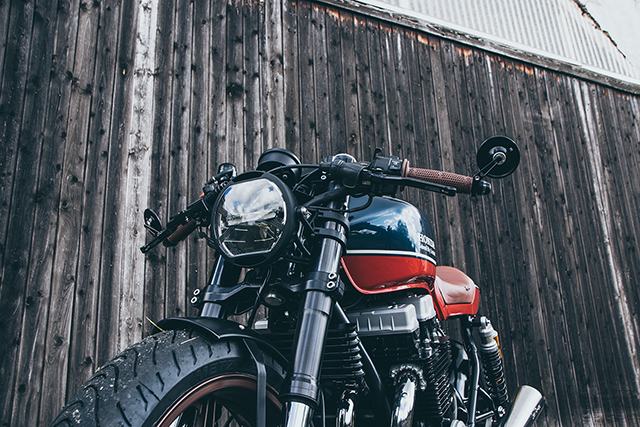 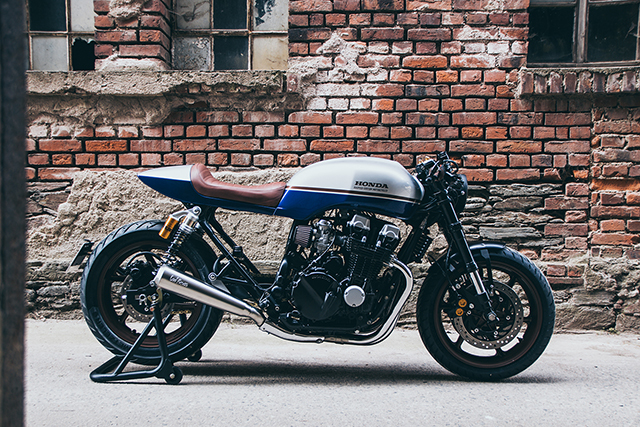 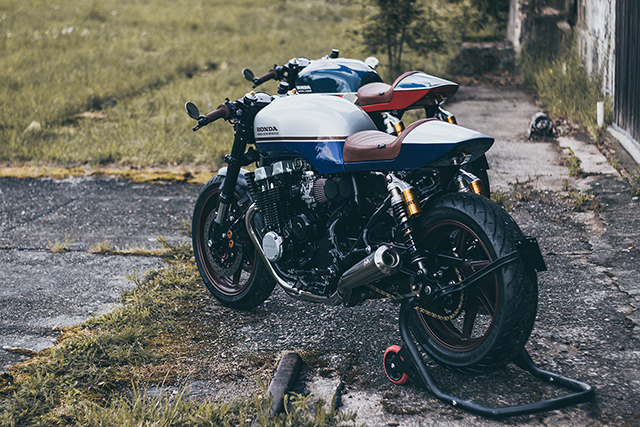 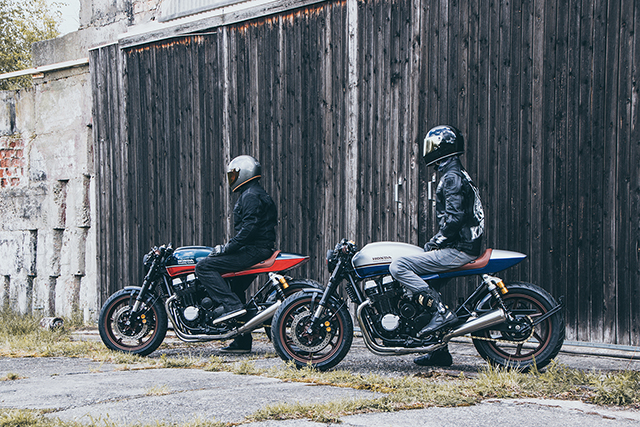