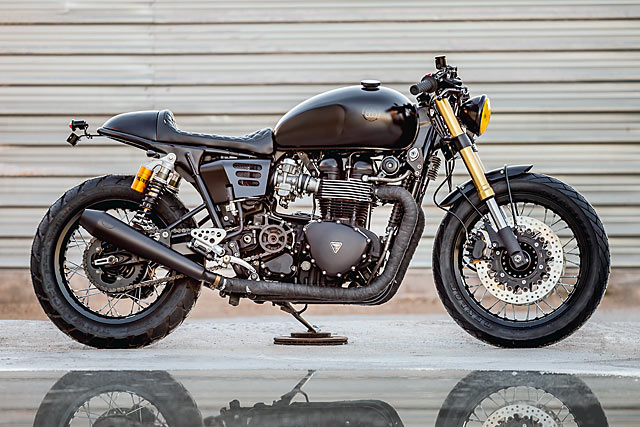 To close out 2016 the Motorcycle industry flocked to Milan, Italy, for the giant EICMA trade show where the manufacturers displayed their latest creations to go on sale in 2017. We might have just ushered in a new year, but what was clear from the show is that the retro revival shows no sign of slowing down. From faithful recreations of old favourites to truly modern machines with vintage styling, there was as much classic candy as tasty tech filled track monsters. Triumph was there in full force and having been in on the retro remake party early there’s never been a better time to pick up a used modern Trumpet at a cheap price and get creative. Which is exactly what our friends Jose and Tito from Spain’s Macco Motors have done, it’s a black steed built for speed, a 2008 Triumph Thruxton known as the “Panther”. Having churned out a plethora of modern café Bonneville’s for clients all over Europe, they’d only just sent out a custom Thruxton when a phone call came in from Norway. Morten had seen the bike thundering around the streets of Viking country and wanted one of his own. The Norwegian lad turned out to be the perfect customer, giving Macco Motors creative freedom with just two demands. That the bike be black, very black and that it be fitted with modern USD forks in Gold, done and done. As Jose explains it was a nice change at the shop, “I can’t say right now how many Triumph Bonneville’s we built before; some of them are not on our website because we built some replicas of models we built before. The thing is that when we received the commission of building a Thruxton a few months ago, we were really happy. We´d been looking forward to building a Thruxton since we started.” Invigorated by the chance to work on the “racers” Triumph the boys set about finding the right donor bike that draws its name from the famous Thruxton Circuit, a race track in Hampshire. With the bike stripped down, the design and planning commenced for the build. And just like the Thruxton previously sent up to Norway, special consideration is taken for the unique climactic conditions the nation presents. Regular snow and ice mean that slicks, a low stance and tyre hugging fenders are out of the question. The Thruxton had to look as good as anything that rolls out of the Macco Motors shop but be capable of giving Morten a thrilling ride without trying to chuck him over the bars at every turn. To get the chassis right, the chunky stock rear fender is ditched and the long hoop rear subframe cut right back. “We built the Steel tail section in the same way we did before, finishing the subframe with an ‘arrow’ shape, and building what we think is the perfect tail section for this bike: not too big, not too small.” The look gives the tail the perfect balance of café racer looks and extra aggression thanks to the sharper lines. On the new subframe sits a custom Macco seat in black leather of course, with neat diamond stitching for a quality finish. The entire frame is blacked out, detabbed to leave only the essentials and neatly smoothed out for a much better appearance than stock. Over the mid-section of the frame the bulky plastic side covers have been shown the door. With Macco’s patented fibreglass vented items in place, again with more aggressive lines to fit the Panther profile. The stock tank remains in place “We chose the satin black instead of the black matt and placed our Macco round logo in a bright finish.” All of which is topped off with a beautifully machined filler cap. So many of the subtle mods start to get the Triumph back to its racer roots, but nothing does that quite like the new suspension setup. The as requested gold USD forks come from a Honda CB600F and transform both the look and handling of the bike. The Showa forks are made to fit with a set of tasty triple trees from Free Spirits. The top clamp is a work of art, machined for the ultimate in lightweight componentry and finished with a stunning stem nut and fork top machined combo.

The rest of the front end hardware is no less impressive; to get the stopping power they were after Macco switched to a twin disc hub. A set of adapters allow for the mounting of Nissin calipers on each side to clamp the drilled discs. A Nissin radial master cylinder provides the power, which is all sent via a set of black shielded braided brake lines to give maximum feel at the lever. The master cylinder is fitted with a Rizoma reservoir, all mounted on a set of LSL clip-on bars. These get their mounting position thanks to a set of LSL’s raised mounts. A set of alloy adjustable shorty levers keeps the look and feel sporty and gives Morten total control over the setup. While a set of alloy footpegs, pedals and heel guards give the bike the racey look it deserves. With the front suspension so thoroughly sorted the rear wasn’t left to chance, world’s best Ohlins fully adjustable shocks with remote reservoirs, keep the back-end planted. That adjustability comes in handy when dealing with the crazy road and weather conditions and the tyre combo was a smart choice; Dunlop F20 110 up front and a Rear Metzeler Tourance 140.

Of course one of the great appeals of the Thruxton of this vintage is it being the last of the air-cooled breed. It packs all the modern technology of the 21st century into a lump that still has all the character and simplicity of the past. The 865cc engine is the EFI version with crisp fuelling and torque at almost any RPM to drive out of the turns. To spice up the sound track a set of classic styled mufflers in black are fed by wrapped headers. While a relocated ignition and rectifier clean things up, an LSL open sprocket cover adds a little venom. To finish out the build and ensure it would pass Norwegian road standard laws a set of mini indicators are fitted front and back. The yellow lenses bates-style headlight gives a distinct Panther’s eye look. While out the back a vintage style tail light and number plate holder swing from the new subframe. A single speedo is centrally mounted and only provides the most basic of information. The Thruxton is all about riding with feel, using all the sensors to dictate the rider’s inputs.

Finally Jose and Tito fitted one of their custom fibreglass front guards in a slightly raised position for the Norwegian roads and this Panther was ready to growl! With another Triumph build finished and shipped off the Spanish duo are sending bikes all over Europe. The languages of the continent might be many, but when it comes to talking Triumph’s it seems everyone in the EU has the Macco Motors lingo down pat!