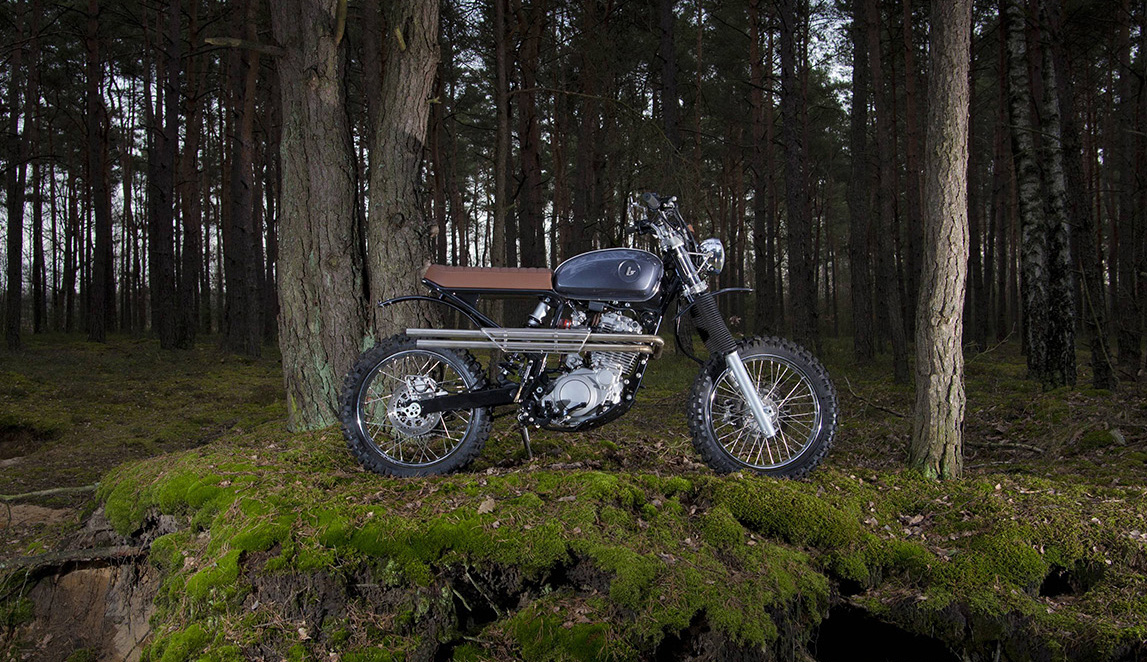 As someone who found math class boring, I never could relate to the comment by the English genius G.H. Hardy that “mathematics is not a contemplative but a creative subject”. That was until Polish builder Krystian Bednarek explained with great enthusiasm his use of complex geometry to formulate the design to create this very bike. Suddenly it all makes sense and Krystian teamed up with his father Janusz to build this stunning Yamaha XT600 scrambler that leaves the whiteboard behind to tear up the local back roads.

So while a very considered approach was taken in designing the ’90s model Yamaha, the purpose was a simple one. “Gravel roads, forests, meadows, fields, from the perspective of riding a motorcycle are unforgettable experiences. Especially if it is a motorcycle stylized for the 1960s. That is why the Scrambler Yamaha XT 600 BS ONE was created,” Krystian explains. So after a great deal of research on the best donor bike to pick for this purpose, he settled on the 3TB variant of the XT for its lightweight, reliability, and decent power.

With the bike picked up and in his workshop, it was stripped down so that not a single part remained on the frame. Then to give him a base from which to work with he built up a new set of wheels with 18in chromed rims laced up to the stock hubs with custom stainless spokes. Now the geometry could come into play, with parallel design lines drawn onto the sketch to create the perfect harmonic divisions. The design Krystian showed me was complex, but the idea is all about creating the perfect proportions from every angle.

First on the chopping block was the frame and with the above in mind, the rear subframe was shortened with new supports minus all the factory tabs and a rounded tail. Then underneath a battery box was built into the frame, as well as a shelf like enclosure for the electricals so that everything was integrated into the singular unit that includes the oil filler in the frame. Then it was off to be sandblasted and powder coated for the perfect finish. This gave some time for fuel tank selection to be considered and Krystian knew exactly what he was after.

Taken from a WSK M21 he explains his rationale, “Firstly: I have a sentiment for WSK motorcycles, secondly: the tank from the WSK has a very nice appearance, and thirdly: half joking, half serious – I wanted to combine Polish and Japanese technology throughout. The tank had to be modified with changes made to the tunnel, new mounts added and the filler slightly reworked. But it looks brilliant and combines exceptionally well with the custom seat by ARMJ, that features two base materials for comfort and is then topped in brown leather.

To keep the rider free from the worst of the spray a set of fenders was made up and hand-rolled from 2mm steel. The front is high mounted off the bottom triple, while the bigger rear unit is bolted directly to the underside of the frame. Then all the tin work could be removed, painted up and the Bull badges applied to the sides of the tank. The classic look continues with the front headlight that is supported by a set of custom mounts made out of stainless steel and the taillights are neatly recessed into the rear.

This use of compact components to create a narrow bike and stainless pieces is all about crafting a machine that can fit through the tight tree spaces and be ultra durable. With this in mind, the rear brake assembly is protected by a custom stainless shield and the exhaust was treated to the same. That exhaust features a twin pipe, high mount system, bent up from 33.7mm stainless and internally baffled for an ultra-clean look. While the engine itself is fully rebuilt and looks brand new thanks to a glass bead blast.

The controls are kept simple with a set of stainless bars in 22mm featuring refurbished stock components. But during the rewiring of the entire bike, it was decided that a phone mount and USB charger would be added so a GPS can guide the day’s adventures. To make the most of the time on the road the front forks and rear shock have all been rebuilt to suit and the new rims wrapped up in Pirelli MT21 RallyCross rubber.

To finish out the build, the bash plate and sprocket covers are now stainless too, along with almost every nut and bolt on the bike. Krystian and his father have done an incredible job in building an almost indestructible machine, that has the good looks to match and it turns out our math teachers weren’t completely lying when they told us geometry really would come in handy one day!