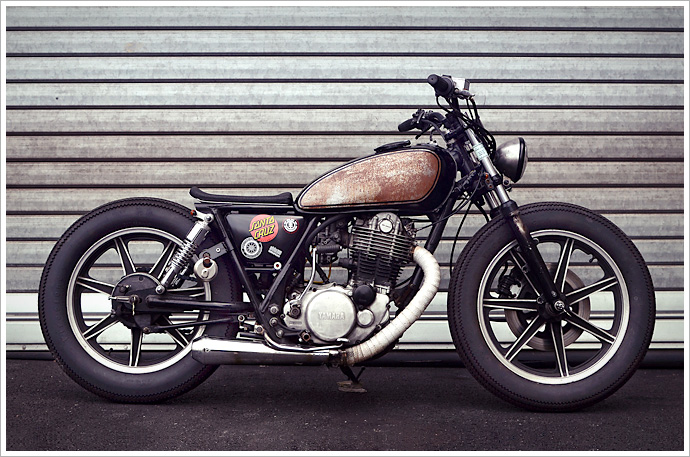 I’ll let you in on a little secret. We’re planning some big things for 2013 here at the ol’ Maison de Tubes Flamboyants. Now I don’t want to give too much away, but I think it’s fair to say that this year will be our biggest and best ever. Resolutions? We’ve made them. Plans? We’ve got ’em. Bigger. Better. More. Faster. Louder. Seriously, Scott and I are like the proud parents of a kid that’s just been accepted into Cambridge. Except we don’t sleep in the same bed – well, not since that one time in bike camp… but I digress. So, taking all impending amazingness into consideration, we could hardly start the year on a dull note now could we? Hell no. Please raise your red plastic cups, sound your plastic bugles and pop your party, um, poppers to welcome our first bike for the new year, Philippe Lagente’s spectaculaire ’81 SR500 brat. “Hello Pipeburn. I’m Philippe, I’m 33 years old, and I live in Toulouse, in the South France. I ride and I am interested by motorcycles, especially cafe racers and bobber, for the past 4 years. The motorcycle you see here is customised by my own hands, and this is the first one I have attempted.” “I bought this Yamaha SR500 model 2J4, from 1981, in 2010, totally stock. After few light modifications, I decided to finish the work last summer. Since I had no garage, I built it in my flat on the 3rd floor without an elevator (yes, i have good friends!), and for the occasion I put the bike in the room where usually I have my recording studio.” “I knew exactly what the bike will look like: small, heavyset, low, aggressive, solo seat, and with big tires! The idea was to spend less money as possible, and build everything by myself. I started by clearing all needless pieces: the old seat, mudguards, speedometer, lights…” “After I have cut the chassis frame to adapt the homemade seat, I didn’t want to follow the trend of having the empty space under the seat as I wanted the bike to look heavy, not light. The exhaust has been modified, same for the handlebars, which come from a motocross bike”. “For the bike I have built a light holder (the light itself is a Bates), an instrument panel holder, the holders for the turn signals, a holder for the registration plate, and footpegs.” No electronics? Does that include cool motorbike websites?

“I have simplified the electrics and repositioned them under the gas tank, which has been painted in satin black on the top, rusted on the side with salt and water, and varnished. A few pieces have been sanded down, like the crank cases, but I kept lots of pieces stock – I didn’t want a show bike, I wanted to keep the old school spirit.” Philippe takes a spin on the wrong side of the tracks

“It’s a great bike, not uncomfortable as you could think, and I use it often. Finally, I asked a good friend of mine Jeremy Dartigues a.k.a. ‘Kreatica’, who is a good photographer and graphic artist, to show off the results. I hope you like it.”