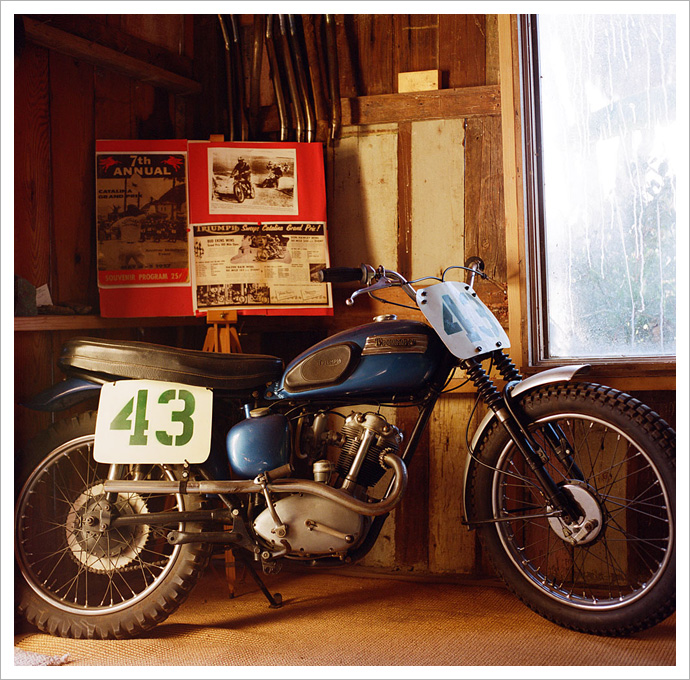 From the “Rust in Peace” series

We’re going to let you in on a little secret. Although most of the bikes you’ll see on these here pages are of the older variety (and some more than others), almost all of the shots we and the owners take of them are on digital cameras. If you are anything like us, you will have left the expense and frustrations of film behind for the amazing convenience of digital photography with it’s instant reviews, massive storage capabilities and myriad of in-camera effects. But you’d have to admit, if you were going to do these bikes any kind of visual justice you’d probably want to shoot them with the same era of technology that they themselves were created with. Somehow it just seems to feel right, as if you were celebrating a life-long friendship with a quality aged whisky rather than a trendy vodka mixed into some energy drink and supped from a day-glo coloured aluminium can. Ladies and gentlemen, please raise your crystal glasses to photographer, biker, and film lover, Dustin A. Beatty.

Can you introduce yourself?
My name is Dustin A. Beatty and I’m a photographer, writer and consultant from Los Angeles, CA. From the “Falcon” seriesWhat bike do you currently own and what’s yr dream bike?
I’ve been on bikes since about the age of three but mostly on dirt. Now I ride a lot of single track, high speed desert and long distance adventure touring in and around California and Baja on a KTM 450EXC and KTM 640 Adventure. For street, I’ve been holding out for an original BMW R90 or R75. The sheer tenacity of those motors coupled with the fact that they’re great looking touring bikes is really appealing to me. Of course at some point I’d like to own a Falcon or a café racer. Mark Hawwa’s 1985 Yamaha SR500 on Pipeburn is absolutely insane! “Falcon”What inspires you?
I’m really lucky to be afforded the ability to work for myself so every day presents new opportunities and inspiration. I come from a publishing and editorial background so in a nutshell I’ve been blessed to essentially live my life the way I want to and make a decent living at it. Currently, that comes in the form of consulting, creating content, shooting photos and directing small films. I learned a long time ago not to compromise and I feel incredibly lucky to be surrounded by some of the most creative and inspiring people I have ever met in the worlds of fashion, music, film, art, design and of course motorcycles. “Falcon”Going back through my father’s archives and films is also a huge inspiration. He was a desert, motocross and flat track racer all his life. There’s just something about the yellowing Polaroids and slides that make me nostalgic for a time that I didn’t live. A lot of those images can be found on my Tumblr page: http://dustinbeatty.tumblr.com/ “Rust in Peace”What gear do you use?
I shoot all film, including my video work, so in my camera bag(s) are a Hasselblad 501cm, a Mamiya RZ67 and C330. For motion I use various super-8 and 16mm cameras. I just really dig the romance you get from film. There are so many iconic images that were captured on film and who can forget Bruce Brown’s seminal epic On Any Sunday?! I have my father’s original poster from that film framed and hanging in my office. “Rust in Peace”What would be yr top tips for us amateur bike photographers?
Shoot what you love. If you take photos and are a knuckle dragging café racer or you buzz around on a vintage Puch, capturing what you’re passionate about always translates into the best images. Photographers like Danny Lyon did this and made a career out of it. The real challenge is to capture something that everyone else hasn’t. It’s especially hard to do that these days in the digital age. You can make anything look like you want it to on the computer. That’s not really my jam. I believe in taking good, solid photographs that look the same on the page as they did when I took them. From the “Wild Ride” seriesAny future bike shoots planned?
I just wrapped up a film I shot with the guys from CHAPTER, the clothing brand. Founder Frank Delgadillo is a big supporter of motorcycle culture; in fact, he’s also close to motorcycle journalist, Nelson Kanno. A number of the guys from CHAPTER organize a ride every year up the coast of California and I filmed the last couple years. I’m really excited about editing that footage down. As for stills, I’ve been trying to get down to Baja to shot more but that probably won’t happen until after summer. I’ve been also meaning to get over to Falcon to shoot the new Vincent. “Wild Ride”How do you know the Falcon guys?
Jason Lee and I rode up the coast to the Moto GP races one year at Laguna Seca where his award-winning Falcon Bullet was to be on display. I met Ian and Amaryllis through Jason and immediately connected over music and motorcycles. At the time, I was working on a story about Nicky Hayden so I got offered to ride two up on Randy Mamola’s Ducati the morning after we all had far too many beers. Red eyed, I made it to the track the following morning just in time to squeeze into leathers and race around on the back of one of Moto GP’s finest. Ian and Amaryllis were all there to capture the moment. It was quite the bonding experience. From there, I worked with both of them to produce images for the Falcon website. Back in early 2002, Harley Davidson linked up with the skateboard footwear and apparel company, Emerica to launch the simple idea of The Wild Ride. A group of us, including most of the Emerica skate team, fellow photographers, filmers and friends rode between skate spots all over the US ending up in cities like New York, San Francisco and Chicago. After joining the second ride, Harley hired me to document the process which consisted of seeing the US by bike, hanging out with friends, camping and the debauchery you might expect from a crew of disobedients. On New Year’s eve 2008 I decided to get out of Los Angeles and spend some time on a friend’s ranch about 100 miles north. After ringing in the New Year, my friend introduced me to the land owner who just so happened to have extensive collection of Triumph Cubs. These weren’t your typical Cubs but ones that had been raced in the infamous Catalina Grand Prix just off the coast of California. While the majority of them were succumbing to the elements and literally rusting in peace, this guy had a few that were kept in pretty good condition. Replete with all the Catalina GP paraphernalia, his property was like a collector’s dream. Sprinkled into the mix was an old Ducati dirt bike, a BSA a few rusty hill climbers and scattered parts that all seemed at home in this half acre outdoor time capsule. After meeting Ian and Amaryllis at the Laguna Seca Moto GP, I collaborated with them on a collection of images to be used for their website. We wanted to communicate the feeling of the creative process and how each part was manufactured, modified or manipulated to fit the needs of each individual bike. The Falcon compound is enough to make any gear head grin and I feel incredibly fortunate to have met Ian and Amaryllis at just the right time. Check out more shots at www.dustinbeatty.com