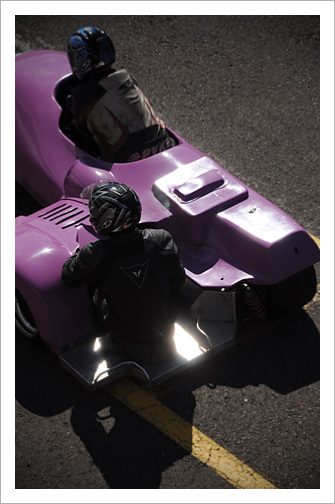 Barry Sheene, in case you were born yesterday or have spent all your life in a Shaker community, is a World Champion Grand Prix motorcycle road racer. Yes yes, I know. Sure, he was a Pommie; but don’t let that put you off. He was sensible enough to move to Australia in the late 80s and we accepted him with open arms – knowing full well that here was a man that was a legend in his own lifetime. Throughout most of the 70s and the first half of the 80s, Sheene reigned supreme as a Grand Prix master par excellence, challenged only by the American Kenny Roberts. Indeed, their battle at the 1979 British Grand Prix is the stuff of legends and is oft-sited as one of the best motorcycle races of modern times.

Less well known is his invention of the world’s first back protector out of used visors; an idea which he gave (!) to Dianese, and which has obviously developed into the units many of us use today. He was also a great proponent of historic motorcycle racing. Which leads us conveniently to the aforementioned festival. As the organisers put it, “Barry Sheene was the epitome of a modern sports superstar, attracting fame, the media and public attention. Except that Barry had that larrikin edge that made him so much more interesting and fun than some of our more modern sanitised sports heroes. Barry was something more, he was funny, brave and above all else unaffected and modest. We are dedicated to running this race meeting as a memorial to what one special person means to all of us motorcyclists: Barry was a friendly, free spirited bike racer and rider. He is a great example to us all.” Of course Pipeburn was there, trusty Nikon in hand. And my God, it was bloody brilliant – hopefully these meagre photos will convey a little of the event. Drink ’em in, guys – drink them in.