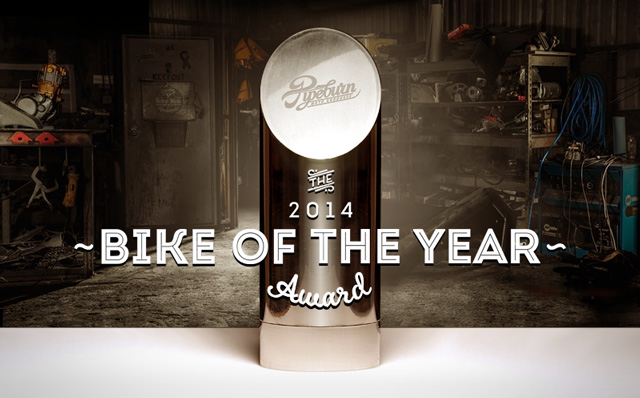 Hot damn – where’d that year go? So with New Year’s so close you can almost smell the tequila, it’s time to look back at the past 12 months to see what rides really took our fancy. We’ve been doing a top 10 list for the past five years, and for the past two years we have been giving out the very shiny, very weighty Pipeburn trophy you see above to whoever takes the No.1 spot. In an art form with a distinct lack of real-world recognition, we like to think of it as our way of rewarding all the builder’s blood, sweat and tears. So we’ve gone back over every bike from this year to count your comments, tally Facebook likes and scientifically measure ‘woah’ to come up with our top 10 bikes for 2014. Enjoy. How many builders do you think can claim that their very first bike stirred up enough interest to be counted as a contender for a Bike of the Year? Well, here’s an addition to what must be the world’s smallest list. Their name is TJ Moto and, even more impressively, they are based out of New Delhi, India. Now, can you imagine their next build? More here. There’s no doubt that scramblers are undergoing a renaissance of sorts; Ducati’s recently-announced foray into the segment is proof positive of that. But we can’t help but think that they’ve been out-cooled – and by none other than a bunch of feisty Milanese. What’s more, they’ve done it on a British bike. It’s enough to make Pavarotti turn in his grave; especially if you rode this matte black, punk rock bastardo over it. More here. It was built by a French shop with a pun as their name. It’s style is almost impossible to pigeonhole. And it’s a Honda that looks like the result of a one night stand between a café racer and a supermoto in a 1970s amusement park. In our books, all that can only be a good thing. More here. Doc Chops, AKA ‘Greg Hageman’, repeats his 2013 performance with a mid-field placing on this beautiful, very factory-looking Star Bolt. He’s been working with Yamaha in the US; let’s hope that a little bit of the Doc rubs off on the suits who sign the cheques. If we all could buy a bike like this right off of the showroom floor, there’s no doubt the company would be bigger than Steve McQueen. More here. Beemers make up 40% of this year’s finalists and they‘ve also managed to group themselves together – presumably in an attempt to storm the top spot in a four-pronged attack. Leading the charge is Amsterdam’s Nozem, with their sweeter-than-sweet R100. The bike has wood. So do we. And just look at that exhaust set-up. Excuse us for a moment, won’t you? More here. Of all the finalists this year, we’re pretty sure that Dirk Oehlerking from Germany’s Kingston Customs will be the calmest of the lot. Why? Because the guy’s already got a bunch of metal on his mantelpiece after taking the German National Enduro Championships as a kinder. But an enduro bike this ain’t. And the coolest-looking old-school café we saw all year, it definitely is. More here. You gotta love BMW’s flying brick; and love’s exactly what Estonia’s Renard Speed Shop gave this K75. With a seat to die for and one of the coolest rear suspension set-ups we’ve ever seen, surely this has the Bavarian boffins rethinking their shelving of the beloved ‘Ziegel’. Fingers crossed. More here. Here’s one that split us right down the middle. For all the frowny naysayers, there seemed to be an equal amount of boisterous fans whipping themselves into a lather over this, the latest build from Blighty’s Old Empire Motorcycles. And from our experience, it’s only the very best of bikes that do that. Facebook may spy, but it doesn’t lie; six thousand of you cared enough to give it the thumbs up. And after the dust has settled we’re still left with something that looks like a boardtracker with a Ducati v-twin transplant. What’s not to like about that? More here. What can we say about Maxwell Hazan and his creations that hasn’t already been uttered a million times before? We guess that’s what happens when your name starts to appear in the same sentences as Shinya Kimura’s. That’s right, for the second year running Max has managed to take top honours in our Bike of the Year awards. Surprised? You shouldn’t be – just look at the thing. If there was a God of Metal, this bike would be what he’d ride. Congratulations Max! More here.

We’d also like to take this opportunity to thank everyone who helped us make this award and Pipeburn itself happen. Cheers to our writers Tim, Ian, Marlon, and Martin. Massive thanks to Paul McKinnon from Evolution Motorsports in Sydney who makes our trophies, and to Junior Burrell at Retro Moto for letting us use his shop for the trophy photo. We’d also like to express our heartfelt thanks to all the builders and readers who supported us in 2014. If you listen carefully you’ll hear the sound of our greasy, leather-gloved hands clapping for you all. See you in 2015.