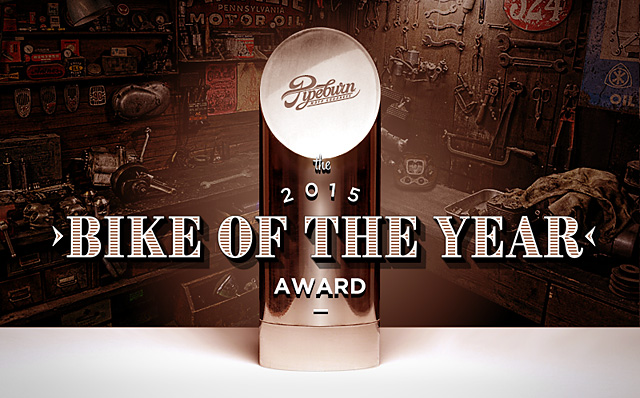 With 2015 disappearing faster than petrol down the throat of a badly tuned race carb, it’s time to take stock of the past 12 months and see what bikes really floated our collective boats. In this, our sixth year of making a fuss about the world’s best custom beasts, we’re glad to say that the brouhaha surrounding this weighty, exhaust-shaped prize seems to be getting bigger and bigger. But the award itself is nothing without the guys it’s intended to honour; the bike builders that bless us daily with their art and expect pretty much nothing in return. Here’s to you, you big, oily, talented lunatics. As always, we’ve revisited every bike from this year (all 180-odd posts) to count and re-read your comments, tally Facebook likes and whip out our trusty awesome-o-meter to come up with our top 10 bikes for 2015. So, without any further ado… We love bikes that make you think. Like great music, it’s the ones that confuse you at first that prove to be the ‘growers’ in the long run. It’s less about the bike itself and more about your ability to connect the new synapses needed to appreciate it. Cue ‘Ol’ Keithy’ by Chad Edwards. Earning a rather amazing 8k in Facebook thumbs, it proved that there is a way to combine flat track looks and motard zip in the same killer package. Anybody from KTM reading this? If so, please make this bike now. More here. Speaking of connecting new synapses, we’re very happy to welcome Jakarta’s Thrive Motorcycles to the BOTY awards for the second time in three years. This wild, go-anywhere creation draws more than a little inspiration from Star Wars speeder bikes and it looks to have about the same off-road abilities. The only thing it’s doesn’t have is the blasters… at least not yet. More here. Old Empire are amongst Pipeburn’s favourite builders. Like an open fire and a good book, they never fail to deliver bikes that impress in both the head and the heart departments. Little wonder that this beauty, named after a famous British Torpedo plane, raked in the clicks and likes. We’re sure the Norfolk lads will be celebrating in their own very English way tonight. Pint of cucumber and corgi sandwiches, anyone? More here. The first of two Viragos in this year’s awards, Plan B’s XV1000 has enough coolness to fix global warming and give The Fonz a good run for his money with the leftovers. Amazing pipes. Sleek lines. Beautiful details. It’s almost the perfect incarnation of a modern Café. And just when you were thinking that Viragos were yesterday’s news, too. More here. With an explicit understanding of what makes classic bike design tick and a gentlemanly hat tip to Ian Barry, this masterclass in bike building managed to teach even our jaded, old eyes a thing or two about bi-wheeled beauty. With nary a bolt nor beam out-of-place and near perfect symmetry, this AJS may be the only one of its marque on the site but what it lacks in friends it more than makes up for in sheer, jaw-dropping good looks. More here. April’s biggest hit was this tougher-than-nails Bonneville Thruxton. It was built with a big budget and for the soul purpose of breaking records at South Australia’s Lake Gairdner – Bonneville’s Down Under twin and a place renowned for its fast salt conditions. And fast is just what happened. Make sure you watch the video. More here. Take one part Yamaha XT600, add a big dose of Picasso-esque Cubism, then follow that with a generous serving of A-10 Warthog and you’ll be getting close to understanding what makes Nick van Woert’s killer Yammie so amazing. Have a brutal urban assault mission you need to conduct? Well, here’s your bike – and it’ll do it all while winning awards to boot.  More here. ‘Modern classic’ is a term that gets chucked about a lot in the bike world. And more often than not, it’s nothing more than meaningless mouth wind. But then there’s Patrick Flynn’s ‘Bullitt’. Our writer Martin called it ‘the best looking Bonnie ever built, bar none.’ Looks like his bold statement has more than a few supporters, too. With enough stance to kill old ladies at 50 paces and lines that makes the word ‘perfection’ seem laughably inadequate, we somehow always knew that this bike would land itself a place in the pointy end of this year’s award proceedings. What a stunner. More here. Viragos. Is there nothing they can’t do? Once again the killer combination of a shitty old Yamaha and the inimitable Greg Hageman delivers the goods like a shot of racing fuel to the heart. Part hot rod, part café racer and part bobber, the bike seems to defy genres while ticking the ‘cool as hell’ box so hard, it has probably torn through the paper. If there was an award for the bike that came out of nowhere to almost win, this would be our champagne-drenched champ. Bravo Doctor Hageman, bravo! More here. We thought. We mulled. We considered and then we thought some more. For the third year in a row, it looked like the powerhouse that is Maxwell Hazan and his magic hands were going to take home the trophy. Was it too much? Should we share the love and give it to someone else? Or maybe re-write the rules to make two-time winners ineligible for the trifecta? But who were we kidding! In 2015, there was simply no other custom bike that came close to the can’t-believe-it’s-real perfection of what has to be Max’s greatest ever creation. So, we’re proud and honoured to make it official. Pipeburn’s Bike of the Year Award for 2015 goes to Max Hazan and his amazing ‘Musket’. Thank you Max for letting us show the world your bike. More here. (And if you’d like to see his past winners, just click here.)

We’d also like to take this opportunity to thank everyone who helped us make this award and Pipeburn itself happen. Cheers to our writers Martin, Marlon and Ian. Massive thanks to Paul McKinnon from Evolution Motorsports in Sydney who makes our trophies, and to Hewia Motorcycles for the background to the trophy hero photo. We’d also like to express our never-ending gratitude to all the builders and readers who supported us in 2015. Without you guys we’d be nothing. Cheers and beers.