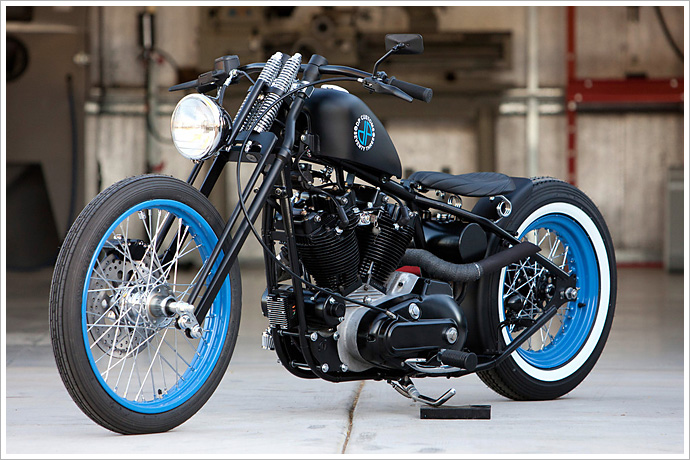 Ahhh, 2012… a superb year for custom bikes, yes? Scott and I have just spent a quiet evening in, sitting around the drawing room table while sampling some of this year’s best vintages. We’ve had a few cheeky German numbers. One or two North American examples and a decent tipple of some fine Australian produce. Were we Impressed? Naturally. Looking back at our 2011 list, it’s hard not to be taken with the overall rise in quality of this year’s selection – one that was hand-picked by us according to your comments, Facebook likes, and with an added pinch of ‘just because’. So here’s cheers to all the makers who were generous enough to bless us with their hard work, and here’s another one to all of you readers for frequenting this fine establishment. The first vintage on this year’s list is a cheeky little number from one of Arizona’s finest makers, the very talented Del Prado brothers, which earnt a record-breaking 1.7k Facebook likes. It must be something in the New River soil. See more here The first ever moped to make it on to the list, and we couldn’t be happier that it’s happened to such a nice guy and dedicated Pipeburn supporter. Jeremy Dubish’s ‘General Mayhem’ moped is a master class in the cool and understated in a scene that can often be just the opposite. Mayhem? Amen! See more here This Honda was as popular as it’s seat (or lack there of) was controversial. With all the to-ing and fro-ing in the comments section it was easy to forget that this was Micah’s first build, and that most of it was done in hotel and/or living rooms. Maybe we should all take a leaf out of Mr. Vince’s book and spend a little more time touching engines and a little less time touch typing… See more here Another great build by the spanner apes, but this time it was less for show and more for go – a long overdue road trip to be precise. With a budget of sweet freaking all and a deadline that was tighter than a Scotman’s wallet, this is the bike that they manage to throw together. Bastards. See more here If we were handing out prizes for this year’s ‘sow’s ear to silk purse,’ this here bike would be sitting comfortable in every single damn spot. See, this bad boy used to be a Honda NightHawk. What’s that sound, you ask? Why, it’s the muffled rumbles of Soichiro Honda doing a post mortem moon walk in his grave as he celebrates someone improving on his catalogue of work. Nice one, Classified dudes. See more here Sure, he’s a Sydney local and a mate of ours, but Paul McKinnon and his latest creation have not only made it into the top five, but he’s also kept the crown for most bikes in Pipeburn top 10 list – the beautiful Harley above with it’s touch of Kimura, dash of John Player Special, and liberal dollop of pull-your-hair-out coolness sees Evolution Motorsport’s fifth bike on the third edition of the list. Honestly Paul, maybe it’s time to give the other guys a go? See more here When Scott sent me this one to check out, I though I was going to have a conniption. Single sided swing arm. Four valve GS motor. Alternator inside the Honda enduro gas tank. Lines like a gazelle. The word ‘Kraut’ in it’s name. If it wasn’t for the ampules of morphine I just happened to have handy, I just might have ended up in hospital, or a ‘Krankenhaus’ as they call them in the Deutchlands. See more here Oh, the controversy! Did he build it or just buy it off of someone else? Did he make it or fake it? In the end it mattered about as much as a the ‘Sports’ in the ‘Sports Illustrated Swimsuit Edition,’ because the guy who owns this bike gets to ride it. Every. Single. Day. See more here Drum roll please. And the winner of Pipeburn’s Top bike for 2012 is Darrell Schneider’s game-changing GP250R Honda. It was only posted four weeks ago, but this amazing bike has managed to make very good use of it’s time by romping home in the numero uno spot with ease. For us, it was the bike’s ability to look so comfortable in it’s skin and yet so radically different to anything else we’d ever seen that really did it for us. And don’t get us started on that air cleaner. From all of us at Pipeburn to Darrell and the guys at DPR, congratulations and thanks a billion for letting us share your art with the world! See more here Here’s the eleventh bike on our list of, um, ten. It’s the one that didn’t kill it with comments or Facebook likes, but still managed to drop our cavity-filled jaws as we trawled back through the archives. Rest assured, when you race into your last corner, way too hot and a big tree makes fresh Homo Sapien paté out of your brain, the bike that whatever the higher intelligence being you happen to believe in will ride in that big cafe in the sky will probably be this one. Probably. See more here