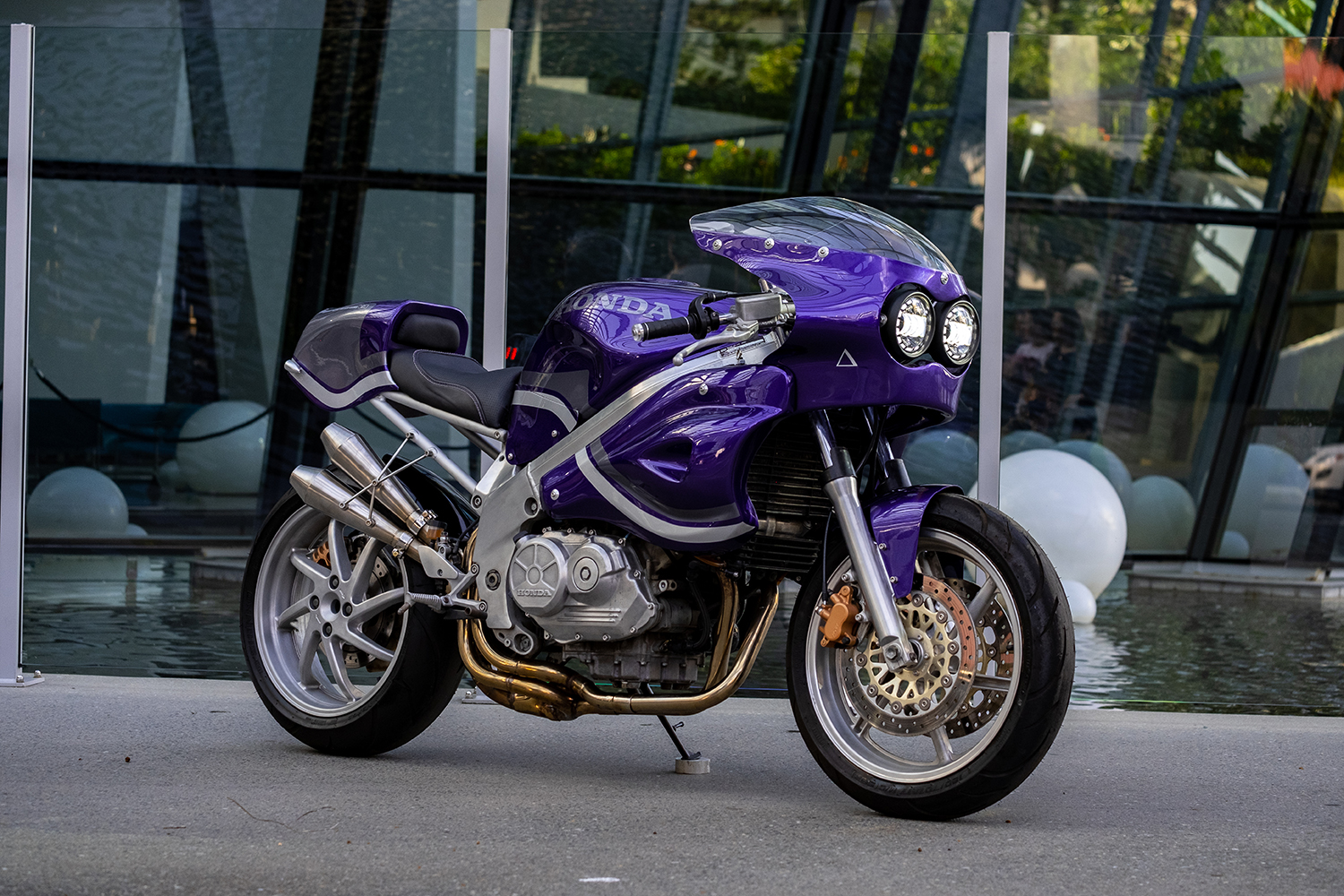 Everything that is old is new again; opening up a copy of any motorcycle magazine in the world and you could be forgiven for thinking that the V4 engine is the latest and greatest invention. But the truth is they’ve been around for ninety-odd years in motorcycles and in the ’80s Honda made them a big success on and off the track. So for their take on a retro racer, Queensland’s Purpose Built Moto, picked up one of the best of the bunch in the 1994 Honda VFR750 and set about crafting their first fully-faired custom creation. The result is this super sweet sportbike that’s low on weight, high on horsepower and an absolute hoot either standing still or at full noise.

From World Superbike Racing to the Isle of Man TT, Enduros and Daytona, the Honda V4s of the ’80s and ’90s were as successful as any racing machine. Now Ducati and Aprilia have turned to the configuration to power their superbikes and the V4 design has won the vast majority of the last 50 MotoGP races.

So it’s no wonder that Tom Gilroy and the team at PBM wanted to get their hands on one. “We started with a well maintained, and running machine that was a little too rough around the edges. After a lifetime of being door checked in carparks, dropped in a garage once or twice and then having a minor off on the road, the Hondas heart had plenty left to give, but the styling was clapped out.”

Having not worked on a bike like it, and these are quite complex machines for their time, the bike was stripped down to better understand its foundation and be able to take stock. Now they could set their course and Tom explains what they had planned, “choosing to criss-cross the lines of ’80s enduro, early ’90s sportbike flair, and a healthy dose of our own PBM styling.” With the broken plastics thrown aside, Tom could see the styling path he wanted to take and placed an order for a new tail and front fairing from Airtech. With the parts on the way an all new aluminium subframe was fabricated that is a drastic improvement over the factory mess!

“With the new front fairing and tail cowl in hand, I got to work on fabricating the stainless steel mounts on the front end,” Tom explains. The side fairings, however, would be made entirely from scratch, “It started with a few blocks of foam mounted where the side fairings should be. Slowly and pain stakingly shaved away and shaped until the form started to reveal itself. The overall outline was quick to land on, however, the detailing took quite a while.” With the process then having to be replicated on the other side.

To get it to pop, Tom went bold with a metallic purple as the primary colour and complimented by gunmetal details and bright silver accents. “Pushing further into retro-racerville I sketched up a graphics design and the guys at Stick it Wraps finished the idea out in a thin vinyl kit that was laid down before final clear coat.” You’re never going to miss it and to ensure that the seat unit wasn’t left behind, Jamason from Timeless Autotrim kept it clean with some tasteful use of perforated leather in simple shapes, stitched up with purple and silver seams.

But just like all PBM builds, the details are just as good as the overall design. Under that seat is a super neat and weather sealed electrical install. “The seat section was custom made and can be removed to reveal the Black Box unit, and electrics tray tucked between the frame rails.” Every wire is perfectly placed, the Anti Gravity battery tightly secured and the finish is better than factory for an ultra reliable machine. For the headlights, you get an enduro look with the use of twin 4.5” PBM LEDs. With the rear getting a pair of Orbit brake lights and Hollowtip LED blinkers.

The 750cc, twin cam, V4 didn’t miss out on the upgrades either and being one of the sweetest sounding engines of the era, Tom took full advantage. First up was a full set of custom performance headers that are neatly shown off on the bellyless beast. “The exhaust was completed with a pair of 38mm torpedo mufflers, hung off a decorative X-mount we fabricated using our Stainless steel fabrication bungs.” While items like the ignitin coils, oil cooler, fuel pump and tap were either overhauled or replaced. Putting the power to the ground Tom opted to switch the rear wheel for the better looking 8 spoke version, that along with the master cylinders are vapour blasted for a slick finish.

“In the cockpit we have centrally mounted vertical gauges, with a temp gauge mounted under the left side fairing. Tarrozzi clip on bars, re-conditioned Nissin levers and a pair of Purpose Built Moto 3 button switches.” With the vital data of speed and RPM displayed to the rider on a set of Daytona gauges that are mounted to the front fairing stay. Thrown onto the dyno for tuning and the VFR spat out a healthy 86HP at the rear wheel and the final curb weight is just 175kg. “All blended together to turn out a fast-paced, eye catching retro sportbike that looks straight out of your favourite synth wave electro music video,” and with the howling V4 soundtrack PBM’s latest release is going straight to number one.