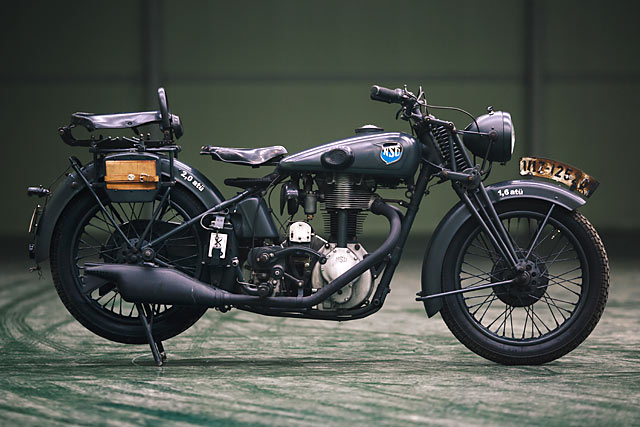 Picture the Audi logo in your head. Hopefully, you’ll be seeing something along the lines of the Olympic rings. Being a company that was formed by a conglomeration of four different pre-existing entities, these circles were designed to indicate a union. And one of those circles was the German NSU Motorenwerke AG. While they produced cars for much of their life and helped to make the rotary engine famous, motorcycles were their stock-in-trade. And some would argue that the WWII 601 NSL was their finest hour. Here’s a mint example from Russia’s Mortorworld. NSU began life as the “Mechanische Werkstätte zur Herstellung von Strickmaschinen”, a knitting machine manufacturer started in 1873 by Christian Schmidt, a technically astute entrepreneur. Motorcycle production began in 1901, and world class racing motorcycles were entered in events in Europe, the UK, and USA from 1905. In 1907, British brand manager Martin Geiger rode an NSU in the very first Isle of Man TT, finishing in a respectable 5th place. During the 1930s, and again in the mid-1950s, NSU was the world’s largest motorcycle producer. In the early 1930s, the NSU company set itself the none-too-easy task of developing an engine design with a truly innovative valve train; the OHV or overhead valve configuration. A very new and completely innovative solution at the time, it was design to overcome the disadvantages of the sidevalve engine: poor gas flow, poor combustion chamber shape, and low compression ratio, all of which result in a low power output. This work was headed by Walter Moore, an engineer from England who had been previously working at Norton. The decision to improve their own engines was less of a masterful internal decision by the company, and more of a severe butt kicking that was handed to them via a series of competition losses against machines from the BMW and DKW factories. Installing twin-cylinder engines on their machines, these companies were one cylinder up against the NSU motorcycles. Stuck using mostly single-cylinder engines, they found themselves being easily outpaced by the competition’s technology. Once a reliable design had been tooled-up, produced and tested, NSU was quick to flick the switch on new OHV-equipped racing models. Specifically, racing engines with 200, 250, 350 and 500cc capacity were rubber stamped for immediate production to try and earn back a little much-needed racing street cred. Considered the cream of the OHV crop was the NSU ‘601 OSL’ that was first available for purchase in 1938; the 562cc engine pumped out a very healthy 24 hp at 3800 rpm. The “OSL” abbreviation loosely translates as “Overhead Racing Luxury,” and the look of the non-military version of the motorcycle was magnificent indeed, what with its tall, finned aluminium cylinder head and the fancy-looking chrome-plated tail pipes. With Nazi officials impressed by the bike, the model 601 OSL was readily adopted by the equipment-hungry Wehrmacht as Germany prepared for war in the late 1930s. A military version of the model was ordered, featuring a second seat, twin panniers and an exhaust system painted in matt black. Its intended use was as a transportation for couriers and orderlies, which probably accounted for its maximum speed of 130 km/h.

[superquote]“With Nazi officials impressed by the bike, the model 601 OSL was readily adopted by the equipment-hungry Wehrmacht as Germany prepared for war”[/superquote] Sticking with a single cylinder, the 562cc engine was powered by a Bosch Magnito and fuelled by the ever-present Amal carb. A four-speed gearbox and multi-plate clutch got the thumps to the rear wheel, which was unsprung. Front brakes were drums, and the overall frame was a tubular design. And the classic’s 185kg (408 lb) mass and 12 litre (3.1-gallon) tank would take any averaged-sized pilot around 240 kilometres between battles.